Editor’s note: This was sent to me, and I felt it was worth publishing since it celebrates a Canadian aviation hero, David Ernest Hornell, of World War II who was posthumously awarded the Victoria Cross for his actions. Rich Thistle is a very talented painter as well as having written this article.

February 2017 - It was at 1900 hours, 250 miles north of the Shetlands, D-Day plus 18. The weather was beginning to seriously deteriorate, with a lowering cloud base and roughening seas. The crew of Canso 9754/P of the all-Canadian 162 Squadron, Royal Air Force (RAF) Coastal Command, was nearing the end of its 10-hour patrol out of Wick, Scotland.

At the controls of this amphibious version of the PBY Catalina flying boat was Canadian pilot David Ernest Hornell, affectionately known to his young crew as “Pop.” Volunteering for the Royal Canadian Air Force (RCAF) at the age of 34, in 1941, he had been just three weeks away from being rejected as too old. At 37, Hornell was not only their pilot in command but also a natural leader. They were his boys. 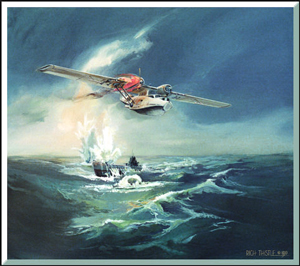 Would they make it to Wick or the only possible diversion, Iceland, more than 500 miles away? Suddenly, in a jolt of collective adrenalin, all attention focused ahead in the gathering gloom. U-1225, a long-range ocean-going sub, one of the many bent on disrupting Allied supply lines to the invasion armies in France, was running fully surfaced. Without hesitation Hornell turned to attack.

The heavily armed sub did not dive but chose to slug it out on the surface, opening fierce and accurate fire on the attacking Canso. Almost immediately the aircraft absorbed major punishment as holes opened in the starboard wing. Finally within range, Hornell’s crew returned fire. The starboard engine, shattered by cannon shell, began to pour oil and burst into flames. As Hornell tried desperately to hold the violently shuttering Canso on an attack course, the German crew ceased fire, assuming victory. The boat turned broadside to reduce the target presented.

Knowing chances for escape were evaporating, Hornell laid down a perfect depth-charge straddle, and, seconds later, explosions lifted the bow of the U-boat well out of the water. As the sub began to sink, the Canso’s starboard engine fell into the sea.

With single determination, Hornell brought the nose of the Canso P into the wind and ditched skillfully in the mountainous swell. As the crew scrambled into the one serviceable dingy, the aircraft settled rapidly and in moments was merely a memory of bubbles. Thus began a second ordeal, a 21-hour trial by sea.

Towering seas threatened to swamp the overcrowded dingy so crewmembers took turns in the icy water. Pop worked to keep their spirits high, but even after an early chance sighting by a Norwegian Catalina that dropped flares and kept station over them all night, the sea began to take its toll. At one point during this nightmare, a Warwick dropped an airborne lifeboat that landed 500 feet downwind. The crew had to physically restrain the exhausted Hornell from swimming for it.

By the time the high-speed rescue launch reached them, two of the crew were dead from exposure. Hornell, blinded and completely debilitated, also died at sea a few hours from port. He was awarded the first Victoria Cross won by the RCAF in World War II, recognizing his steadfast courage displaying “valor and devotion to duty of the highest order.” The surviving crewmembers were also decorated.

For the survivors of David Hornell’s Canso crew, it was 47 years later on April 7, 1991, that they were finally able to come together for the first time since the war to remember “Pop” and the momentous events of that day. Only three of the crew were in attendance: Syd Cole, radio operator/gunner; Graham Campbell, gunner; and Ed Matheson, navigator. They were guests of honor at a ceremony at Canadian Forces Air Command Headquarters in Winnipeg and looked on as Hornell’s Victoria Cross, the highest British and Commonwealth award for valor, was placed beside those won by two of Canada’s more famous aviation heroes: World War I ace Billy Bishop and Andrew Mynarski, a midupper Lancaster gunner.

Rich Thistle, author, painted the picture called “Press on Regardless” that depicts the Canso attacking the U-boat.