New Kid on the Block

March 2018 - What would you do if you owned an avionics company for the experimental aircraft world and wanted to expand your horizons? The owner and founder of Dynon Avionics, Dr. John Torode, EAA 1213461, has created a new company called Vashon Aircraft, which announced this month a new aircraft for the trainer market. The aircraft, at least five years in secret development, is a high-wing, strutless, tricycle-geared, all-metal aircraft. It will be sold fully equipped with, you’ve guessed it, a Dynon Skyview panel for a shade less than $100,000. The company’s sales motto is “Always Fully Equipped.”

Vashon expects to have several aircraft on display and for sale at EAA AirVenture Oshkosh 2018. The aircraft was designed by Ken Kruger, EAA 349268, who until five years ago worked as an aircraft developer for Van’s Aircraft, so the choice of an all-metal design is no great surprise. 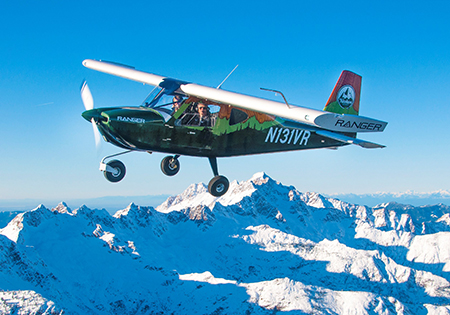 The all-new Vashon Ranger 7 takes to the skies over Washington state.

Power is supplied by a Continental O-200D, and one wonders if a better choice might have been a more modern engine with FADEC. Perhaps it’s just too difficult to get a certified aircraft approved with a modern automotive based engine. Could it be that training schools need students to learn about carb heat and mixture control so they could also fly the older fleet?

Apparently, the business plan is to roll this aircraft out slowly, initially by renting aircraft in the Seattle area to training schools.

One is reminded of the Zenith all-metal, high-wing designs in the experimental market if you remove the struts, STOL capability, and engine choices. Light trainers are clearly a different market than homebuilt aircraft. You would expect a commonality of engines and panels in aircraft targeted to become the default choice for training.

If you would like more information, see the Vashon Aircraft website or check out the article in the March issue of EAA Sport Aviation.

It’s refreshing to see a clean-sheet design from a completely new player in the certified aircraft market, and we wish the company well.