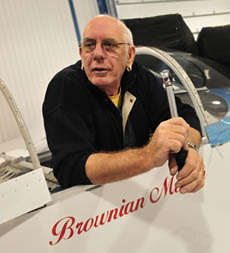 We’re still deep in the snows of a tough winter but looking forward to the new season and better flying conditions. If you want to catch up on some hardware knowledge, Dick Kohler has some useful information about washers from EAA’s Hints for Homebuilders series. There is always something you can learn from these videos, even if you’re confident in your own skills. I know what you’re thinking: “Washers? Honestly?”

A pilot friend who is a nuclear medicine doctor in the UK recently sent me this video relating a very moving story about a wartime Spitfire accident. If you’re not moved, I’d be surprised. It’s a fascinating story.

We were sad to hear that Sam Aircraft in Lachute, Quebec, has decided to close its doors. The Sam Aircraft was an interesting design, and Thierry Zibi really poured his heart and soul and probably beaucoup money into it. It’s sad to see it go. We wish Thierry success in whatever he tries next. Incidentally, the average millionaire in the United States has been bankrupt three times, so don’t lose hope, Thierry! 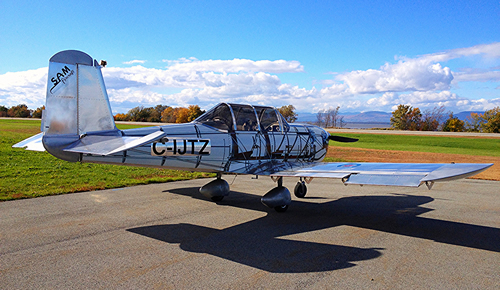 The Sam Aircraft with an interesting vinyl wrap.

A couple of aircraft builders in Alberta were building a Van’s Aircraft RV-9A, but they also fell in love with a completed example. They love flying it so much that they are ready to sell their complete kit for a good price. From experience, I know that shipping and duties add significantly to the cost on paper of an imported kit, not to mention the benefits of free work having already been done for you on the empennage and firewall. They are asking $25,000 CDN which by my reckoning constitutes about a 30 percent discount. If you’re thinking of building this model, it looks like a great deal. They’ll also sell you the tools they bought for $1,000 CDN which is about one-third of what they paid. If you’re interested, call Donavon Bentz at 403-652-7176 or Ed Perkins at 403-835-3791. We’re hoping that they will write us a nice article about both their kit-building experience and their flying example.

Sun ’n Fun International Fly-In & Expo is coming up fast – April 21-26, at Lakeland Linder Regional Airport, Florida. Many Canadians are looking forward to the sun and getting away from that not-so-fun white stuff up north. While plenty of “snowbirds” make it to the show, you don’t see too many Canadian aircraft there. I’ll be there for at least part of the show. Contact me if you want to meet up. Here is an abstract from the planned schedule.

I was intrigued by the idea that the RV-6 has more of a Hoerner wingtip while the RVs in general have a more rounded wingtip. I e-mailed Van’s and asked the question about performance differences. Ken Scott at the support desk said they had “experimented with both and did not see a difference. The RV-9 airfoil doesn’t lend itself to the traditional Hoerner tips.

“We’ve experimented quite a lot with different wingtips over the years – some of them quite different – and have found almost no measurable difference. I’ve flown an RV-6 with the older Hoerner tips and newer tips like those we use today with both sets of tips – on the same day – and could tell no difference whatsoever.”

I followed up with a question about exact numbers for stall, cruise, etc., and he replied that “as far as I know, nobody’s done really precise testing of wingtips on an RV-9. If you do, we’d be happy to know your results.” That might be an interesting experiment for someone to do. Anyone up for it?

It will be interesting to see the results of Bill Evans’ flight testing once his Hoerner wingtips project is at that point. I hope you enjoy his article this month on his homemade Hoerner tip tanks.