Canadian Aviators Do It on the ICE!

April 2016-  Those of us who live in the frigid North, somewhere above that vague and arbitrary line called the Canada/U.S. border, tend to be a fairly hearty breed. Sure, some of us might skulk away in our cozy natural-gas-heated apartments for the nine months of the year that mark the time when frost is likely to nip one’s nose, but many of us don our winter apparel and head out into the swirling snow to celebrate life in our more polar clime. Just because the mercury is no longer visible in the thermometer tube doesn’t mean we have an excuse to avoid enjoying the great outdoors. But what about Canada’s aviators, in their frail little craft—how are they to cope with winter’s brutal blows? That’s easy…They Do It On The Ice!

Aha! Now that we have your attention, some wise soul is likely to ask just what it is that Canadian aviators “do on the ice”? The answer is simple…We hold a fly-in! In fact, the Ottawa area boasts a tradition of having hosted just such a fly-in for 27 years and running! This tradition exists through the hard work, determination, ingenuity, and generosity of Maurice Prud’homme, or, to those of us who don’t do the parlez-vous so well, he is known simply as “Mo.” The event he organizes goes by an equally simple and direct name—Mo’s Fly-in. And what an event it is! 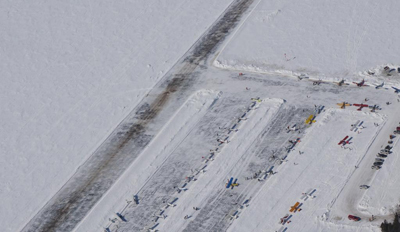 Every year for the past 27 years, Mo has invited aviators from near and far to visit his little slice of the Ottawa River. Twenty-seven times he has risked the wrath of the weather gods while using his delicious chili to tempt pilots to drop in for a visit. That chili has to be pretty darned good to coax any sensible pilot away from the warmth of the wood stove in their cabin. Judging from the number of aircraft seen in attendance, it’s clear the chili is more than up to the task!

The advertising flyer published by Mo always advises that skis are the preferred landing gear for this little get-together on the river. The reality is that Mo and his team, with their years of experience, have a knack for ploughing a runway that’s useable by a broad array of aircraft, most on wheels rather than skis. Mother Nature, of course, always exerts her ultimate power over the ice. In 2015 she gave us many days of consistently cold weather, producing ice that was wonderfully smooth. This year, in the week leading up to the fly-in day, she freely dispensed every form of precipitation in her arsenal. It was only on the day before the event that we received word from Mo that the runway was open and ready to receive those willing to give it a try. 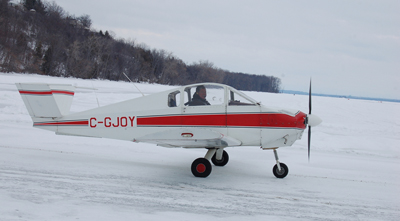 Pure JOY on the ice

So what does it take to land on an ice runway, you ask? The answer is simple. It doesn’t take particularly specialized equipment—Mo has had everything from helicopters to ultralights to light twin-engine aircraft land on his strip. (The term “strip” conjures up an image of a verdant line of well-manicured grass; perhaps this ice runway would better be called a “sheet” in keeping with the tradition of the sport of curling?)

The keys to landing on ice seem to be two-fold; firstly, be a master of controlling airspeed through a stable approach. Too much speed, coupled with the low coefficient of friction presented by the ice, could leave an overzealous pilot wishing Mo had let his plowman extend the runway surface an extra half mile.

Secondly, one needs to be prepared to use EVERY avenue available to exercise control over the aircraft during ground operations. A deft toe on the brakes, a well-timed blast of propwash to swing a tail around, even the deployment of the cabin door as an aerodynamic brake. Be prepared to use every resource at your disposal. Most of the time, landing on ice isn’t much different from landing on a regular runway; however preparedness for the paucity of traction is an absolute must.

This year’s fly-in took place on February 27. The day dawned cold and crisp… and windy. Mo very wisely orients his runway in a north-west to south-east direction, parallel to the river’s shore; this orientation also corresponds nicely to the direction of the prevailing wind, normally. As the day progressed the wind picked up in strength, blowing from the south, directly across the runway. 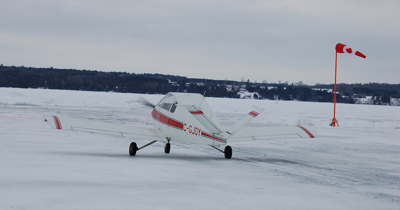 Taxiing in a brutal crosswind

At least one local pilot reported having too much difficulty opening hangar doors against the strength of the wind; his airplane stayed in the hangar. Without doubt, many pilots assessed the winds as being beyond their comfort zone, opting to stay home. Those with ski-equipped aircraft had a little easier time dealing with the wind; as a result there was a nice assortment of skiplanes in attendance. For those on wheels, only a few brave souls made it into Mo’s. Once you arrive, it makes sense to try to keep what warmth you have in the engine. 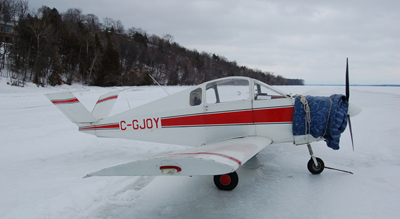 All who attended were greeted warmly by a terrific group of volunteers who served up Mo’s excellent chili, hot coffee, and cake. The smell of wood smoke in the air attracted many people who stood by the fire barrel, taking advantage of its warmth. Much good conversation was had. While many folks grit their teeth in a snarl as they confront winter’s icy blast, the prevailing facial expression seen at Mo’s is a broad smile. There is always laughter to be heard, be it from pilots telling tall tales or kids playing on the conveniently located snowbanks.

Even the canine crowd seems to enjoy this event; one woman, seen clutching her pooch to her chest with both arms, commented that it was a mutually beneficial experience. She was helping the dog stay warm, and the dog was helping her stay warm. They both seemed to be smiling!

Quite an uneven surface!

While the weather managed to keep a few pilots away, it wasn’t able to keep away an owner/builder/pilot famous in the crowd of Van’s RV aircraft builders. He is known by several nicknames including such apt monikers as “The Mad Russian” and “The Russian Invader,” but to those who have met him, he is known simply as “Vlad.” Vlad built a Van’s RV9A and started flying it five years ago.

To give you some idea of why Vlad is known far and wide as an ambassador of the RV community, it would be helpful to know that, in his five years of flying his RV, he has amassed some 2,500 hours of flying time. That’s 500 hours per year, all done on weekends and vacation days. He has covered just about every corner of the continent and many of the whistle stops in between. All it took was an open invitation posted on a popular RV builder’s forum, and Vlad hopped in his trusty machine and flew up to Mo’s from his home base…in New Jersey! 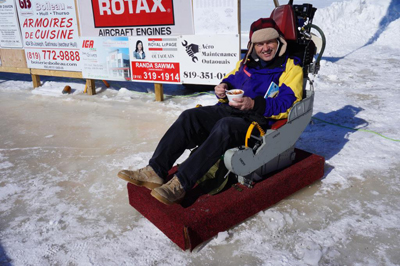 This year Vlad ran into some troubles taxiing his airplane on the Ottawa River ice. The RV9A features a castoring nose wheel and is steered using differential braking. It also features a large vertical tail and rudder, one of the attributes that make it such a delightful cross-country traveler. This combination proved to be a challenge on the ice runway. The limited traction available to the tires for differential braking, coupled with the large sail area of the tail, meant that Vlad didn’t have very much directional control, and in fact could only turn in one direction—the direction into which the howling wind blew him!

As a result, he ended up doing some “off-roading” as he made his way from the end of the runway to the parking area. He euphemistically refers to this trek as a “rodeo”; for those of us watching him that would seem a very apt description of the bucking and twisting gyrations we watched his aircraft execute on the ice. All three of his wheel pants were cracked from their contact with the hummocks of hard snow and ice.

Despite having spent about 15 minutes “backtracking” to the parking area, Vlad emerged from the cockpit with his characteristic big smile and warm handshake. He is extremely well-suited to the role of aviation ambassador—every person he meets is a new friend. After fuelling up with chili, cake, and a few cups of coffee, his airplane was the last one to depart the fly-in as he spent a bit of time cooling his heels (literally—it wasn’t a warm day!) on the ground awaiting his customs clearance time “on the other side of the fence.” See you next year, Vlad! 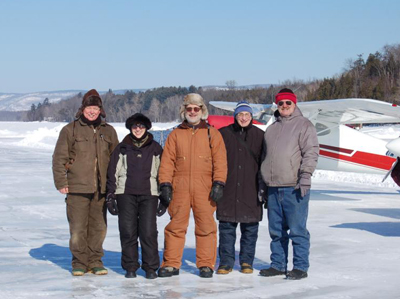 When we think of a fly-in, most of us think of a warm summer day, with T-shirts, shorts, and sun hats and crispy grass under our feet as we walk around the assembled aircraft. Mo’s Fly-in presents us with an opportunity to shatter that paradigm, to bundle up in the warmest clothing we own, and head out onto the ice for a truly Canadian fly-in experience. The weather is cold, but the spirit of camaraderie is as warm as you’ll find anywhere.

February 2017 is only 11 months away; start mustering your courage and making your plans to attend. Mo’s Fly-in is a unique and truly enjoyable experience, and it’s held right here, virtually in our backyards, on the Ottawa River. It’s an event not to be missed. See you on the ice next year!