April 2016 - My son, Justin, has an interest in aviation that is very keen and growing. As a young child, his grandfather, a former private pilot himself, would continually point out different airplanes as they passed overhead. They would also make numerous visits to Porcupine Lake to check out the local floatplanes. Grandad filled his grandson’s young mind with exciting flight stories.

His first introduction to flying occurred at the age of 8. Justin participated in the Young Eagles program hosted by the Timmins EAA Chapter 1126. At this point, his interest grew, and he accepted any offer to soar through the skies with local pilots…on wheels or floats. One of his first flights was in a Cessna 182 to Iroquois Falls. The pilot would become his future employer and a friend. This past summer, Justin accepted an invitation to explore the area in a Beaver floatplane and practiced touch-and-go manoeuvres on a local lake. He has also been fortunate to feel the thrill of flight by taking the controls.

In order to highlight the current Young Eagles program to the newer generation locally, Justin volunteered to set up a website for the program. He took photos of every future pilot, so they could relive the moment. Parents were also able to download the pictures of their child from the site. Justin is a member of the local EAA chapter and regularly attends the meetings. He also assists the chapter with their Sunday breakfast gatherings.

In the past year, Justin completed the Sporty’s ground school offered through the Young Eagles program. His knowledge of flying has increased, driving his passion for flight. For his career studies class in high school this past fall, he chose to experience a job shadow at a local airline company. The cold weather on the ramp did not dampen his enthusiasm. 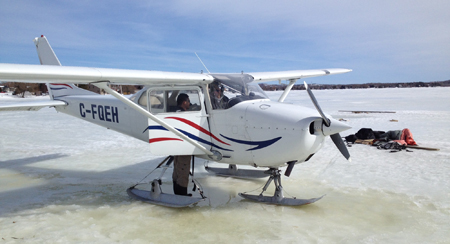 Justin looks forward to obtaining his recreational pilot’s licence in the very near future. His goal is to become a commercial pilot, and he has already looked into various flying programs. His desire to fly hit a peak this March break. Justin arranged to take his first flight lesson at Sudbury Aviation. He was all smiles as he assisted the pilot in preparing the Cessna 172 for the introductory lesson. More importantly, he was thrilled to be able to pilot the 172 on skis. Combined with his ground school knowledge, this flight only served to further heighten Justin’s interest in aviation. With a flight school set to open locally, the opportunity for Justin to fly is closer to becoming a reality.

One hour down…Justin is looking forward to many more hours in the skies!

Justin has worked as a loader on our Young Eagles days and helps with our breakfast that we do monthly. He has also encouraged other young potential aviators to attend our chapter meetings to the point that we are considering establishing a separate youth program. Lloyd Richards, EAA Canadian Council

This is a great example of Young Eagles in action. That first flight is also reimbursed by the EAA. We’d like to wish Justin all the best for a future in aviation and offer our thanks for what he is doing to encourage other young future pilots. Editor