April 2017 - EAA Chapter 1410 out of High River holds its monthly meetings in the hangar owned and operated by 187 Foothills Squadron of the Royal Canadian Air Cadets. This stems back from the early days of the chapter when the Air Cadets were using the hangar owned by one of the chapter members. In those early days, the cadets had to open the hangar doors and push a couple of airplanes outside so that they could hold their weekly events. In fact, so did the chapter members when they held their meetings in that hangar. 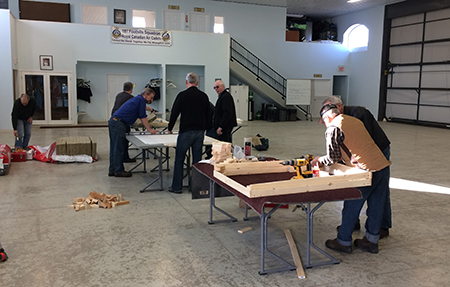 Setting up the production line.

Once the Air Cadets built their own hangar, they reciprocated the generosity and invited the chapter to hold its meetings in the beautiful new cadet hangar. This was a wonderful opportunity to make better use of the facility. The cadet hangar is significantly larger and without the clutter years of aircraft ownership creates. 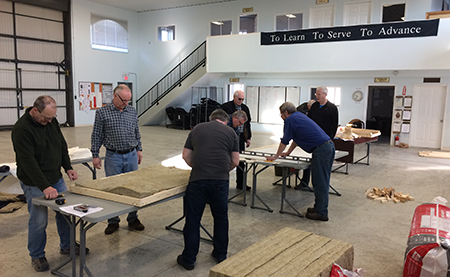 Production of the soundproofing panels underway.

The challenge with the Air Cadet hangar is the sheer size and its resulting echo. To help reduce the echo and improve the sound for the meetings and events, Chapter 1410 decided to build some noise attenuation panels to mount to the walls. The cost for these panels was paid for by some of the money raised by the chapter during last year’s EAA B-17 tour. The work bee involved about a dozen chapter members, and everyone broke into small groups. Each group had a specific task in building these panels. It became a fairly efficient production line. As you’ll see from the photos, the production was halted temporarily for some nutrients and liquids, courtesy of Tim Hortons. 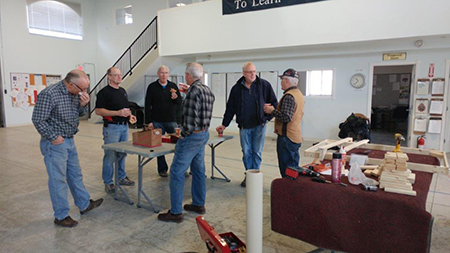 Once the group was refreshed, production proceeded at a blistering pace. In the end, they produced 18 panels that were strategically placed around the four exterior walls of the hangar. Even before they were finished, it was noted that the echo was reduced. 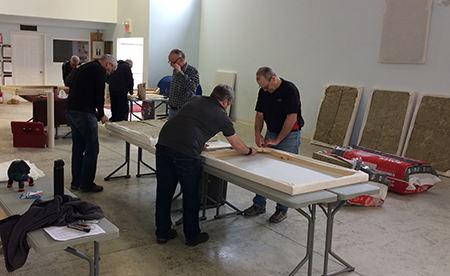 Installation of the panels begins.

In the future, the chapter may go one step further and hang some panels from the ceiling to reduce the noise bounce between the concrete floor and the tin ceiling, but for now mounting the panels to the walls was a great start.