You may remember that Bill added his own design Hoerner wingtips to his Sonerai and upgraded the engine from a Jabiru 2200 to a 3300, requiring more fuel capacity and some other significant mods. Here is what he has been up to recently. — Ed.

Unless we write down at once what’s been done on the Sonerai, much of the detail is lost to memory. This is especially true this time since about six days’ work has been done during March. We plan to give titles to the sections in the hope of clarity.

Gord Larsen, as well as Steven and Tony, continue to make time to help me. I am in the building groove, but their help makes the progress more sure and encouraging for a June test flight.

We once bought a dozen OEM Ryco oil filters for a Jabiru engine, all of which had thin cases and leaked at the base plate. This year we picked one filter, made by Toyota, which has the best reviews.

Three years ago we met a British chap online and subsequently bought an oil cooler thermostat from him at SUN ’n FUN International Fly-In & Expo. It is sandwiched between the oil filter and the engine case with the aid of an extension. The chap designed and made the thermostats. It is the part in red just behind the filter. One needs an adapter for the oil cooler regardless, so this part accomplishes both adapting and regulating oil temperature in a part the same size as just an adapter. The four small chrome bolts hold the end cap on the thermostat. One could take it apart in situ if that was needed. 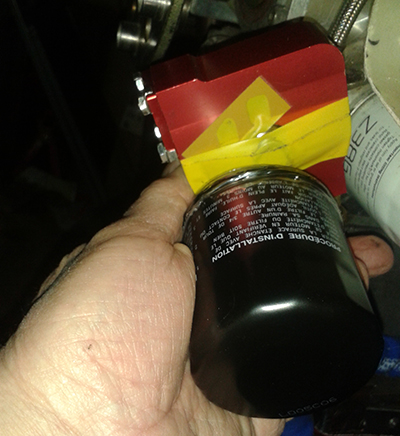 The oil cooler is rated at 15,000 British thermal units (Btu), which is calculated at a similar airspeed as the 2200 engine – around 130 mph. But the projected airspeed is 180-200 mph, so the larger oil cooler may be too much at 75 percent cruise. The thermostat should open around 230°F, close between 190°F and 200°F, and solve temperature issues whether hot or cold.

We’d gone as far as we could with the oil cooler on the bench, so it was riveted to the oil pan. It’s doubtful whether the oil pan needs cooling with a 15,000 Btu cooler, but some cooling is provided albeit oil cooler outlet air. The cooler is done this way so that the lower cowl may be removed without disconnecting the oil lines. The oil cooler air inlet is a chin scoop 3 inches high and 8 inches wide. The oil cooler outlet air exhaust is directly above a 12-by-14-inch cowl flap which opens about 8 inches. If you did the math, you’d realize the cowl flap area is about three times the combined areas of the oil cooler inlet and the cylinder cooling inlets in the top cowling. The advantage is that the cowl flap may be adjusted to optimize cylinder head temperatures.

This has been said before, but the blue oil cooler hoses are 3,000 psi braided hoses with the blue heat shielding held in place with the big yellow tie wraps. They are also spaced using a bit of oil hose and a tie-wrap. The end fittings are also stainless flared connections to matching threaded elbow connections on the oil cooler. We’ve tried lesser quality hoses before and had one slip off its end fitting during a ground run. One learns from that. These were made by Marshall Equipment and are about half the price of the ones that Aeroquip makes. 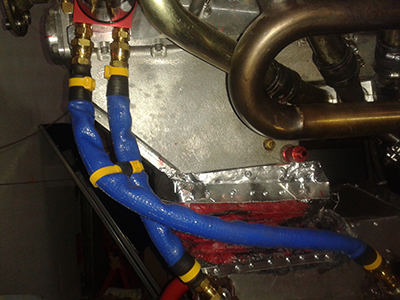 The hoses need to be aligned and routed so they don’t get tangled when the lower cowl is closed, which lifts the oil cooler closer to the oil pan. 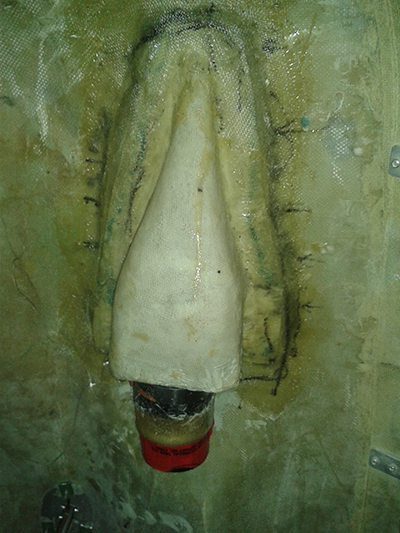 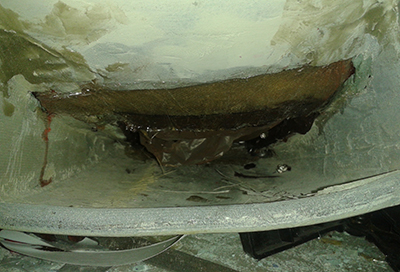 This has been mentioned before, but we’ve tried to employ what is called a reverse flow air-oil cooling system. In the oil cooler the air and oil essentially flow in opposite directions. Air flows up and aft and oil flows forward. Thus, the coolest oil is at the cooler outlet, and we want to have the coolest air or inlet air at that cooler outlet.

The photo of the cooler also shows a homebuilt rectangular form of SCAT hose. It employs filter paper about 30 inches long, coated on both sides with Loctite urethane color coat. When the cowling is closed, the filter paper is compressed in a way that a good air seal is made between the cooler and the lower cowling. 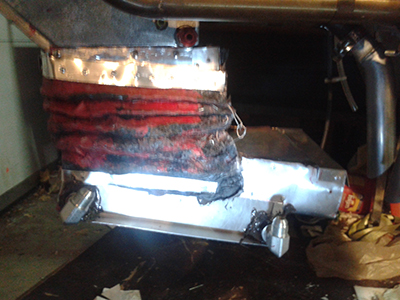 Why all this trouble to make a lower cowling? By doing this, the upper cowling may simply be removed by a quarter turn of Camlocs. Nothing needs to be disconnected. Further, much of the routine engine maintenance may be accomplished once the upper cowling is removed. Lastly the upper cowling is the same cowling used with the J2200 engine on a longer engine mount. The cylinder cooling inlets were enlarged to fit the two cooling air ducts.

Most of the photos for this were taken before painting, so you will be able to see the individual components.

At the time of writing, the work list has been reduced from 53 items originally to about nine items today.