May 2018 - The Langley Regional Airport (CYNJ) is located in British Columbia’s Fraser Valley just 30 miles east of Vancouver and has long been known for training student pilots from around the world. Opened in 1938 to support Trans-Canada Airlines’ system, it was taken over by the Department of National Defense in 1941 as a training field using Tiger Moths and as an alternate for the Operational Training Unit at Boundary Bay. Today, in addition to three flight schools, it is home to the Canadian Museum of Flight and more than 50 aviation-related businesses. These include a large number of helicopter companies and maintenance operations as well as the base for the Royal Canadian Mounted Police Air Service helicopters. There are many private aircraft based there, ranging from antiques to modern turboprops. With more than 80,000 movements annually, it can be a pretty busy place. 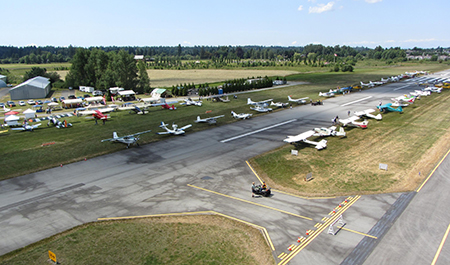 Located in a private hangar on the west side of the airport in the midst of all this business is an airplane that is every bit the same age as the airport. This airplane is still performing the duties that it was designed for 77 years ago. How many of us can say the same thing?

The Porterfield CP-65 Collegiate is one of two antique aircraft owned by Werner Griesbeck, EAA 108746. Werner has been part of the activity on the airport for many years as an air traffic controller, flight instructor, and aircraft owner and restorer. He has restored 40-plus aircraft including five Piper Cubs, the Porterfield, and his Fairchild 24 and has assisted in a number of others, including a Beech Staggerwing and my Stinson. 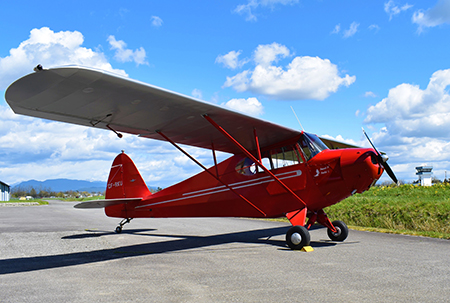 The Porterfield was designed and built in 1939 in Kansas City, Missouri, by the Porterfield Aircraft Company as a contender for the Civilian Pilot Training Program. It was competing with Piper’s J-3 Cub, the Aeronca Defender, and Taylorcraft’s L-2 for a share of that burgeoning trainer market. While the J-3 was the ultimate winner of that competition, the Porterfield certainly did its share.

Construction of Porterfield’s two-seat tandem aircraft consisted of a simple fabric-covered wing with two spruce spars and wooden ribs attached to a rag and tube fuselage mounted on conventional gear. The prototype was originally powered by a 50-hp Continental engine. The design was later powered by a variety of engines; in addition to the Continental Porterfield included both Lycoming and Franklin as lower-cost options. The design was firmed up by May of 1940 as the CP-65 powered with the Continental A65, and serial No. 1,029 was one of the approximately 400 built before production ended in 1942. But in the fall of 1941 sales were slow, and while No. 1,029 was manufactured on November 5, 1941, it was apparently stored until November 8 the following year before being assembled and assigned a registration number.

Registered as NC37899, the aircraft began its first career as a trainer in the Civilian Pilot Training Program (CPTP). Built as an FP-65, it flew 2,167 hours with the Franklin 4AC-176B2 engine, which was replaced by a Continental A65-8 sometime in 1947. According to the logs, during the winter of 1943-44 it even spent some time on skis. The first three owners kept the airplane in New Jersey until the third owner moved west to Seaside, Oregon. In 1964, it was again sold, this time into the Seattle, Washington, area. From there, it was moved to Chelan, Washington. In 1968 it arrived in Canada and was flown extensively with cross-country trips around British Columbia and as far north as Whitehorse in the Yukon. After a particularly hard landing, RKU became a project and changed hands two more times before Werner obtained it from a local air cadet squadron in Mission, British Columbia. He restored it over a four-year period between 1976 and 1980. The fuselage was stripped, sandblasted, and coated with an epoxy. As the original wings had deteriorated to the point where they were only usable as patterns, new spars and ribs were fabricated from spruce.

The plane was covered using Poly-Fiber and painted Pontiac Red for the fuselage and Nevada Silver on the wings as per the original factory scheme. Werner did make some changes, adding a wind-driven generator to provide power for a radio and a transponder, which are necessary to survive in today’s positive control zones. These are located in the left wing root above the pilot’s shoulder. No provision has been made for a starter so hand propping is still the order of the day. The gas gauge, while simple, is very accurate. Not too much can go wrong with a bent wire stuck in a cork and protruding through the cowling above the 13-and-a-half gallon main tank. Leroy Blum, a friend and FAA inspector in Riverside, California, also owned a Porterfield and helped with a 337 form that allowed the addition of a wing tank. This holds another 7 gallons, which increases the range by about 50 percent. He also reinstalled the factory optional skylight with new Plexiglas. No changes are possible to the interior so it is as tight as it ever was. This is without a doubt the skinniest airplane I have ever seen, and you can confirm this by standing behind one to see how little is there. Since at 5 feet, 5 inches I actually fit in the front seat, it is a mystery to me how anyone much taller and wearing a parachute ever was able to get into either the front or back seats. (Parachutes were required by the CPTP for spin training.) According to Joseph Juptner in his 1980 book U.S. Civil Aircraft Series Vol. 8, “It would recover hands-off from a six-turn spin in one turn or less,” which is not something I’m likely to try to confirm.

The instrument panel is appropriately basic for a day VFR trainer. The principal instruments left to right are the airspeed, altimeter, magneto switch, and tachometer. Above those are the compass and the oil pressure and oil temperature gauges. Under all of that you will find the carb heat control, a skid ball, and the cabin heat control. To the left of the panel are the throttle, primer, and the fuel shut-off. The fuel shut-off is a large black lever that is clearly in the way of everything in the off position and folds down and flat against the side of the cabin when on. The throttle and fuel shut-off are duplicated in the back for the instructor’s use.

Elevator trim is managed through a small crank located under the seat that changes tension on two springs attached to the stick. The mechanical drum brakes are heel operated, and at first blush they may seem awkward, but in actual use they are completely natural in this charming antique.

Since the restoration was completed, RKU has never been a hangar queen and has been flown regularly in British Columbia, Washington, and Oregon. In 1981, Werner took the Porterfield to Oshkosh while dealing with issues related to flight at gross weight with the 65-hp engine. Camping gear and a 240-pound passenger added to the excitement, and this likely was the prime motivator for the later engine upgrade. Over the years, Werner has shared it with a number of local pilots including me. I first flew RKU in the 1980s when Werner used it to give me, then a brand new pilot, a tailwheel checkout. Years later, I put a few more hours on it giving Young Eagles rides and flypasts at the Abbotsford Air Show, and while I saw the airplane parked behind my Stinson every time I went to my hangar, it would be 15 years before I flew it again.

I am a current taildragger pilot with 700-plus hours in my Stinson 108 in addition to assorted Cub, Champ, and RV-6 time. However, as the insurance company wanted a minimum of two current hours in the Porterfield before adding me to the coverage, that and common sense said it was time to renew my acquaintance with the airplane while under supervision.

As the supervisor is not only the owner, but also a former flight instructor, a retired air traffic controller, and the same guy who restored it, there could be no pressure — right! That same Teutonic predilection for neatness and correctness in all things that got him this far extends well into his training skills. There is no expectation other than perfection. At the end of the day, I crawled back into my Stinson just to see if I actually did know how to fly. Wheel landings that I accept as normal on pavement are not permitted. They must be three-point regardless of the number of bounces. The Porterfield’s narrow gear is quite stiff, contributing to some degree of crow hopping, and surprisingly, once down it will roll and roll, probably right off the end of the runway if left to its own devices. The drum brakes, while used mainly for run-ups, will slow you enough to make the turnoff.

Flight in the Porterfield is a delight. To give the old bird a bit more oomph, Werner had used another 337 form to upgrade the engine to a C85-8 from the original C65. This makes a remarkable difference in climb rate. With two lightweight pilots on board, the 85-hp Continental had us airborne in seconds. Takeoff power could be applied immediately and did not require the extreme right rudder that I am used to in my Stinson. The ball stayed in the centre, more or less, with occasional reminders from the back seat. Visibility from the front seat is exceptional in all directions. Downwind is flown at 80-85 mph and final at 70 slowing to 60 over the threshold. I fly power-off on final but am spring loaded to add some if needed. I round out a little too high each time so that my landings are more arrival than touchdown. Once down, I add power and do it all over again and again until the GIB (guy in back) is satisfied.

One fine day this past April, after 15 years, I once again went solo in RKU. The Porterfield is even livelier than I remembered it. It got off in half the space and time, and the climb rate at or near 1,000 fpm was significantly better than I remembered. The extra 20 hp of the C85 certainly made its presence felt. Without the GIB the ride was also much quieter, but the ball wandered just as much. Landings went from good to less good, but the airplane is still usable.

Porterfield CF-RKU is the only one registered in Canada, and a recent search of the FAA’s registry website lists just 68 active aircraft in the United States. A delightful and rare aircraft.