Glide Advisor in ForeFlight 9 Could Save Lives

While attending an air show like SUN ’n FUN International Fly-In & Expo, one of my greatest pleasures is to visit the booths of the vendors to find out what is new. ForeFlight is always high on my list, and in getting a demo of the new version 9, I realized just how well a new feature could be used in an emergency. It’s called Glide Advisor.

What Glide Advisor does is what computers are really good at doing – calculating stuff really fast and displaying the results in a useful way. If you think about it, what we do after an engine failure in our heads is to make an estimate of where we might be able to land, but it is nothing more than guessing and hoping. Imagine if you actually had the time to calculate, “For my best glide speed, I’ll be dropping at so many fps and I see a runway over there, and I guess it’s about 5 miles away, and I guess its actual altitude could be about 500 feet above sea level and that rising terrain must be what, 800 feet, oh, and the winds at my altitude...” 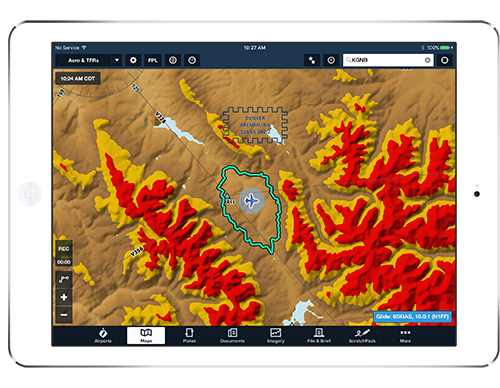 Okay, I’ll start that paragraph again. What Glide Advisor does is all that! In fact, it uses your best glide speed and descent ratio to dynamically draw an outline of where you would make contact with the ground if you maintained best glide speed. It shapes that outline over the actual terrain using all the data at its disposal including winds at your altitude.

You have to go into map settings and switch on Glide Advisor, and you will then be asked for your best glide speed and glide ratio, and you can specify it per aircraft. Note that it seems to be only available in settings within map mode, and not in map settings under the general settings mode (if that’s not too confusing). This may be an omission. I’ve sent them a pilot report.

One other useful version 9 feature that I might have benefited from when getting to know my Stratux box was a new “device disconnect” alert feature. Before I purchased a nice enclosure, the USB connection was a bit loose. ForeFlight 9 now announces with audio and a very noticeable message displayed on the screen that your device has disconnected.

There are many more new features, too many to cover here, but there are some excellent videos available on ForeFlight version 9.