May 2017 - This little airplane belonged to the Museum of Flight in Langley, British Columbia, but had been sold to a U.S. buyer. My friend Werner Griesbeck, a licensed aircraft maintenance engineer, had taken on the task of doing the annual inspection and preparing the aircraft for a delivery flight to its new owner in central Washington. The inspection done, it was time for a test flight, which Werner completed and then he offered it to me for my checkout. Being a single-seater, the checkout has to be done verbally, on the ground. 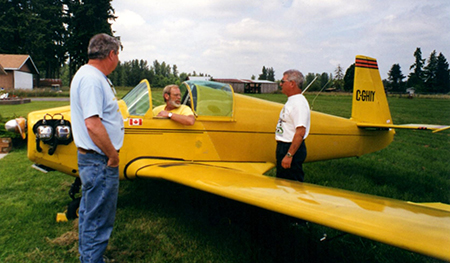 I had the usual cockpit check and got the critical numbers for takeoff, approach, and landing. Then it got a little weird. Three of us then picked up the airplane and placed it on two padded sawhorses, so that I might actually retract and extend the gear while still safely on the ground. 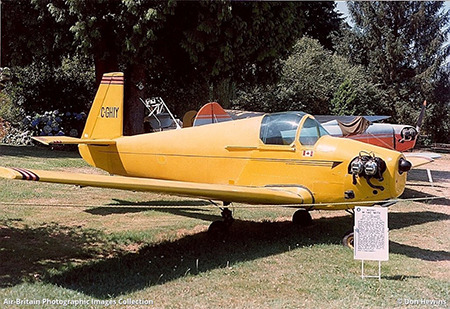 Raising the gear requires reaching down towards the floor, grasping the handle with your right hand, sliding the handle vertically on the shaft to release it from the detent and then swiftly and smoothly swinging the handle to the horizontal position and pulling the slider aft to lock the gear up. Lowering the gear reverses this complex procedure requiring turning your right hand sideways on the gear handle and pushing it in towards the firewall while lowering it out of a detent and then swinging the handle down into another lock. It seems similar to rubbing your forehead and patting your chest, all while flying the airplane. I managed to do this after two or three tries, and we determined that I was ready to go flying.

I got taxi and takeoff clearance from the tower and put-putted off (only 65 hp) into the blue. On downwind, I tried to raise the gear and got it unlocked but not in the up lock. Now what? I couldn’t get it back down either! All three wheels just swung back and forth in spite of my best efforts. Okay, I thought, best get out of the circuit and try and sort this out. My main concern now was to get it locked back down so I could land without significant depreciation of the airframe value.

As I headed away from the airport, mouth dry, palms sweaty, I was fully aware that I had to fix this or else! The airplane flew quite well even with the gear swinging back and forth, so I tried letting go and using both hands on the handle. Nope, won’t work, no room, almost but not quite. Time for another idea – use my right foot to push it into the down-lock. Eureka, down and locked!

I went back to the field and landed and taxied back to the hanger. I apparently needed more sawhorse time.

A couple more tries and I had it sorted. Taxi back out, take off, retract gear, “high-speed pass,” left break to land, gear down, land; big smiles all around, finally got it right. Fun little airplane, and one that I would have liked to have had more time to enjoy.