My Homebuilt PA-12 Will Be at AirVenture

May 2017 - I am a Piper guy from way back. My neighbour was a crop sprayer for years, and he first introduced me to an original PA-11. I fell in love with it. Years later, I purchased one on floats. I had many flights with that aircraft. I have been a pilot now for 11 years.

However, I wanted to fly farther north and wanted the ability to land either on water or at an airport. My wife and I wanted to travel across North America in comfort. I also wanted to have a substantial gross weight increase with multiple modifications including a glass cockpit and a 200-hp engine. I first thought a Super Cub might be the plane for me, but I found the fuselage to be very tight. I then discovered a certified PA-12 at a local fly-in ... it seemed perfect. Except for one thing: In the certified category there were many modifications simply not allowed, and I absolutely wanted them.

I then turned my mind toward the amateur-built category. This would allow me to build the airplane of my dreams.

I spent many hours researching and discussing where to purchase my engine. The most reliable and respected company turned out to be Aero Sport Power of Kamloops, British Columbia. I contacted Cory Anderson of Aero Sport Power in August of 2016 and discussed a suitable engine. He assisted me in creating a 0-375 Lycoming engine with one standard magneto and one P mag. He also said he could paint it for me in any colour I wished. I chose the blue you now see in the photos.

Now that the power plant had been chosen, I needed plans for a fuselage and a welder with experience. I located a company (Univair) that had been in business for 40 years assisting amateur builders. They helped me in creating an airframe with gross weight increase, a seaplane door, and baggage compartments.

The wings were a kit purchased from Dakota Cub, which allowed for long-range gas tanks. The Wipline floats were purchased directly from Wipaire. They are the “gold standard” in amphibious floats in my opinion.

I have never built a plane before, however I met John Gordy, of Tillsonburg, Ontario, who specialized in the manufacture of Cubs and asked if he would consider helping me create the ultimate PA-12. Thankfully, he agreed, and we began building the wings in October of 2016. John and I spent many hours building and manufacturing aircraft parts.

The complete build took about seven months, and both John and I are extremely proud of the plane. He provided encouragement and taught me that by focusing on the small stuff, eventually we would be looking at an airplane. He was obviously correct. I will always be in debt to him for his tireless dedication to the project.

This is a picture of the aircraft at my house on Puslinch Lake in Ontario. I own the seaplane base on that lake (CMB3). You can find it in the Canada Water Aerodrome Supplement. 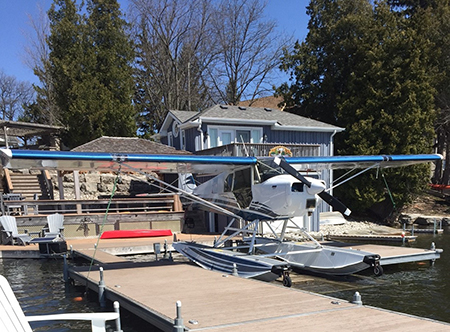 My homebuilt PA-12, and the home where it sometimes lives.

My glass cockpit and panel were installed professionally by Brant Aero, which along with Aero Sport Power, Pro Aero Aviation, and Progressive Air Services, are all part of the same Progressive Air Group of companies. 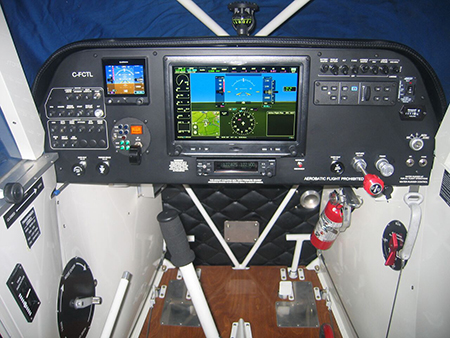 Apparently, my aircraft became conversation in a meeting and, as a result, the owner, Rob Wharf, asked me to put this aircraft on display at his Progressive Air booth at EAA AirVenture Oshkosh this summer. 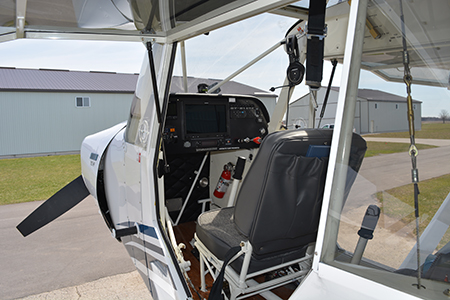 And a wider view of the cabin.