June 2018 - It all started with a phone call the night before telling me to be at the airport for an 11 a.m. briefing for a photo shoot. The subject was a recently re-restored 1938 Beechcraft D-17S Staggerwing owned by a retired businessman from West Vancouver. We wanted to get some air-to-air shots for a magazine article, and this was the first day that both the weather and everyone’s schedules coincided. The plan called for using a Robinson helicopter, a four-place R44, as the camera ship as we could take the doors off for unrestricted sightlines. It seemed like a good plan, everyone inside and warm except the photographer — me.

The air temperature on the ground was minus 4°C with calm winds, sky clear, and visibility as far as you could see. How can it get any better? I had a borrowed an arctic type flight suit and an all-Canadian toque. Gloves were a problem, though. If they were to be warm, they’d be too thick to operate the cameras. Oh well, tough it out barehanded and get on with it. 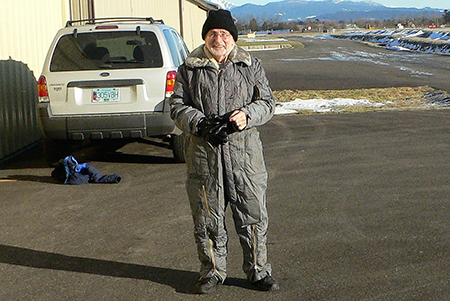 All trussed up and ready to go.

Everyone involved got together, and arrangements were briefed for altitude and direction of flight for the best light and backgrounds, and airspeeds and radio frequencies were confirmed. As the R44 cruises at 109 knots, it was agreed by all that the Staggerwing, being faster, would form up on the helicopter as required.

The air was smooth with no wind to speak of. The local mountain peaks were clear with a coating of fresh snow, which made for an excellent backdrop for the bright yellow Staggerwing. 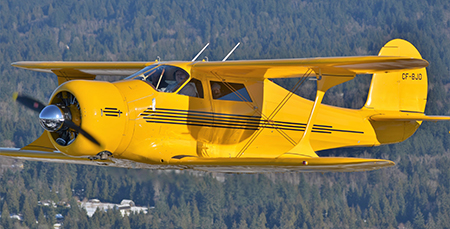 During the shoot, the helicopter pilot would yaw the helicopter toward the Staggerwing to help position the shots and this of course put even more cold air into the back cabin. At one point, I became concerned when it appeared that I had a camera failure. I switched to a backup camera only to have the same issue. As it happened, both cameras were fine; it was my hands that weren’t. I was losing feeling in my fingers and couldn’t feel the camera controls. The pain from the cold quickly became unbearable. Incidentally, a quick check with “Professor” Google told me that a temperature of minus 4°C and an airspeed of nearly 110 knots equaled a windchill of minus 43°C! However, as we changed locations or the Staggerwing repositioned, I took the opportunity to get the gloves back on and restore some semblance of feeling to my hands.

All went well, and as a result, we got the last of the pictures we needed. 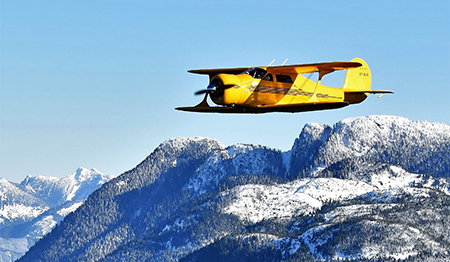 That sweet shot with the fabulous backdrop.