The View From Below

June 2018 - A recent article written by Patty Wagstaff, EAA 200806, for Plane & Pilot sparked some memories. She wrote about learning to execute and then to perform inverted ribbon-cuts. That article inspired me to share my experience with ribbon-cutting from the viewpoint of one of the people on the ground holding the poles.

The Abbotsford Airport has hosted an annual air show for what seems to be forever. I started attending in the mid ’70s and have only missed one show since. At three shows per weekend that would be around 117 days at that particular air show. Another regular was Art Scholl, an aerobatic pilot who not only flew air shows and competitions but also worked for the movie industry, flying in movies such as The Great Waldo Pepper, The Right Stuff, Blue Thunder, and finally, Top Gun. Aviation and air shows lost a great personality when he was killed flying a sequence for Top Gun in California in the fall of 1985. We all miss Art and his co-pilot dog Aileron. 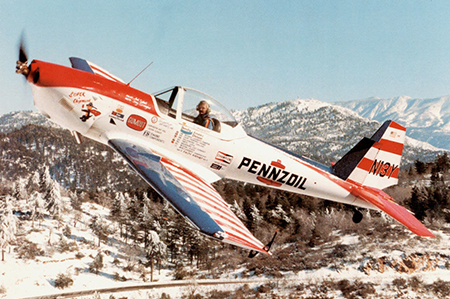 He was a regular at the Abbotsford Airshow in British Columbia throughout the 1970s and 1980s. Art would come to Abbotsford and perform in a borrowed Piper J-3 and in his highly modified Super de Havilland Chipmunk. The ribbon-cut was the climax of his show and was a huge crowd-pleaser. One year during the Friday show, I was selected to hold one of the two poles that supported the ribbon.

The airport had resurfaced the show runway with nice black asphalt just prior to the air show. Air show weekend weather was “clear and a million” with temperatures in the high 90s. This created some interesting air over the runway as Art soon found out. 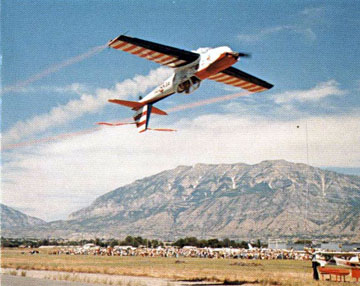 During Art’s show, his ground crew would set up for the ribbon-cut, readying the poles and ribbon and briefing the volunteers on when to raise and how to hold them. They were in contact with Art by radio, and when he was ready we were told to raise the poles. We were also told to concentrate on keeping the poles vertical and not to watch Art. Like that would happen!

As Art descended to the show line, he rolled inverted and approached the ribbon. I saw what looked like “lock to lock” movement in the ailerons as he dealt with the hot rising air over the runway. Large power changes were also apparent as he appeared to control altitude with throttle. In spite of my best intentions, I never saw him cut that ribbon. I closed my eyes just as he passed through. If you have ever been that close to an inverted airplane that was no more than 10 feet away from you both horizontally and vertically, you will understand.

I was disappointed in myself for my lack of intestinal fortitude and total inability to watch what was clearly a once-in-a-lifetime opportunity. 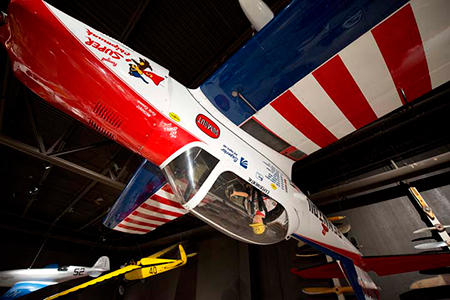 One of Art’s Super Chipmunks, N1114V, is on permanent display at the EAA Aviation Museum.

Well, the stars aligned on Sunday, and I was once again asked to help. It was a great experience and one I have never forgotten. The second time, I kept my eyes open. I can’t imagine how it feels to fly that sequence, but I do know that standing out on the runway holding the poles has to be a close second.