Not Exactly a Nail Biter but...

June 2016 - We started the long cross-country flight from Venice, Florida, to Bromont, Quebec, in mid-May in my RV-9A. My good friend Gaétan Gagnon once again had flown Air Canada down to be my copilot for the flight back. If you’ve ever done this kind of flight, it’s always a journey of discovery as well as a challenge. This was our second long flight using Foreflight on an iPad with two backups on iPhones, as well as an in-panel Garmin GPS. 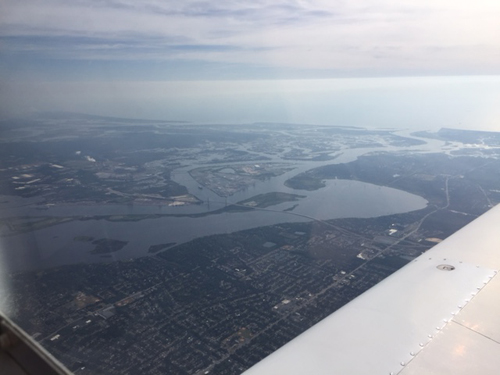 For our routing we retained one of our favourite airports, Allendale, Georgia, as it’s close to our fuel limit, but right in line with our route after having passed over Jacksonville. We chose 7,500 feet as our altitude because it was just above the cloud tops but below adverse winds at 9,500 feet. Allendale is a really welcoming stop, with great fuel prices. As a side note, I discovered a gotcha with my newly modified noise cancelling headset. The battery died in flight, and I discovered the spare battery was not where it was supposed to be. It works beautifully, but when it’s not working it’s worse than the standard unmodified headset. I guess in order to cancel the noise they have to admit some of it, or something like that. Anyway, the nice lady manager at Allendale, KAQX, sent a willing municipal employee off to buy me some 9-volt batteries. I’m sure I would not have been able to tolerate the much noisier headset for long. If you’re reading this, thanks a million. 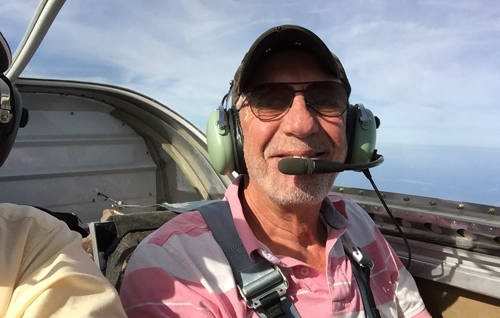 Smiling for the camera

Another strategic change was that since we were flying over areas pretty dense with airports, we decided to push the length of the flight legs a bit. In the past, since I’m pretty much chicken at pushing anything, we’d refuel when the tanks were still about half full, averaging legs that were 2:15-2:30 hours in length and sometimes shorter. Realizing that there was a real possibility of making the trip in one day, we extended this to 3:00-3:30 per leg, still leaving about 10 gallons in the tanks when we landed. Managing our own fluid consumption helped a bit too, as did the new memory foam in the seat cushions. No more gluteus maximus spasmus! 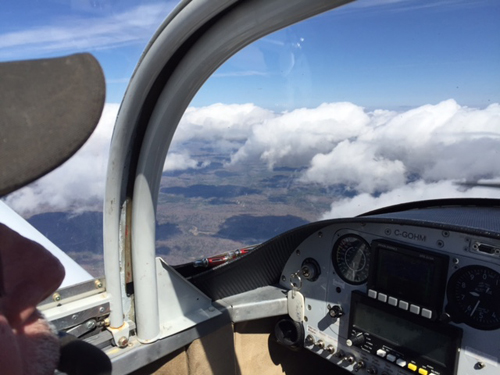 Staying above the clouds but below some adverse winds

Leaving Allendale, the Washington SFRA was directly in our path. We modified the course around Washington, D.C., from last year. We stopped just a little short at Culpeper Regional, CJR, took a stretch walk, emptied out, filled up, and we were on our way. The problem with this route is that if you go much further west you get into turbulence-producing mountain ranges, but if you deviate around D.C. to the east we were really going to be unable to avoid the Adirondack Mountains in Vermont without a significant detour. We basically weaved around the Special Flight Rules Area, using guidance from flight following, overflew Frederick, Maryland, and then headed east of the Camp David prohibited area and continued north. We had called for a flight briefing and then, in flight, contacted Potomac approach to resume flight following.

Having a transponder and using flight following is great. I always feel safer. We used it all the way. We had some good tailwinds and managed to achieve over-the-ground speeds as high as 170 knots (over 300 kmh!) at 7,500 feet.

The land becomes more hilly north of Washington, but we managed to avoid too much turbulence until we were getting close to the Canadian border. A strong weather system began to beat us up, and after about an hour of bumpity bumps we decided to put down short of our destination since it sounded like we weren’t headed for VFR weather at our home airport. With the longer legs we could have made it home in one day, with only two stops en route, but the severe turbulence on the last leg convinced us to put down overnight at Griffiss International in Rome, New York.

The FBO at Griffiss was beautiful. Imagine going to work here every day. 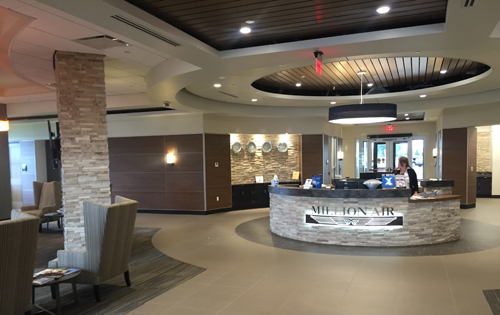 We were delighted to discover this very upscale FBO, which agreed to lend us their courtesy car to get to our hotel. This was also the place where we made a new discovery about the Electronic Advance Passenger Information System (eAPIS). According to the U.S. customs agent at this airport, you have to be prepared to have your aircraft and documents inspected when LEAVING the United States. So the declared point of departure in your eAPIS manifest has to be an airport at which you must land, not just fly over. In our case, we had chosen another airport as the “point of departure” since the real one, KVNC, wasn’t in the eAPIS database. The customs officer in Rome, New York, at Griffiss International Airport, patiently explained this in detail and that we would have to refile our eAPIS manifest. Once that was done and he’d checked our customs sticker, we were good to go for the short flight across the border.

Having received email approval for our manifest, all that remained was a weather briefing and we’d be on our way home, with a flight plan of 85 minutes. We called for a weather briefing and discovered that we might have problems. The ceilings in Sherbrooke to the east were at 800 feet. They were okay in Montreal, and the edge of the low cloud was apparently somewhere in close to our home airport. Calling friends didn’t really help too much so we decided that, worst case, there were other places to land, and we had lots of fuel for the short journey.

The departure from Griffiss International was interesting. We were basically occupying the same airspace as a drone. We had the opportunity to talk to the pilot, who explained that the NOTAM about the drone test flights should not be an issue for us. As we approached our aircraft we heard a sound like an airborne lawnmower coming in on final. They very quickly cleared the runway and we were good to go, in quite clear skies and no lawnmower wake turbulence.

As soon as we began to climb, we saw that we would have some visibility problems and were glad that we’d chosen a route around the northern limit of the Adirondacks in New York and Vermont. Climbing to 7,500 feet we were unable to identify one mountain range from another because of a fairly dense haze in the distance, but the visibility was fine for what we needed.

A flight plan is mandatory when crossing the border. We opened ours, and we requested flight following for our journey. We were handed off from Syracuse to Boston and finally to Montreal Centre. By the time we were within about 40 nm of home we still couldn’t see the airport clearly nor identify our local mountain, so it was still a bit tough to know whether we’d be able to land at Bromont, CZBM. But in another 10 miles we were able to call “airport in sight” and to begin our slow descent to the circuit. The ceilings were broken with plenty of height for us to be able to drop down underneath as we approached. Gaétan landed like a professional in gusty conditions, then reminded me that the brakes were on my side! We were home, 10 hours flying time door to door, with a few more things learned and a great experience under our belts.

We taxied to a tiedown, closed the flight plan, called 1-800-CANPASS to clear customs, then stepped out of the aircraft to discover very chilly air compared to the warm, humid weather we’d left in Florida. Although my neighbours tell me they’d had a sprinkling of snow the day before we landed, they’re now very grateful that I brought the warm weather with me. It’s been beautiful since we got back, so I guess I did bring it.

Now if I could just control weather enough to order up a tailwind whenever needed.