June 2016 - Chris Young is a software engineer and pilot who realized that a fairly low-cost automatic dependent surveillance-broadcast (ADS-B) receiver could be put together using off-the-shelf components and some software that he wrote. Leo Nikkinen, like your editor, decided to purchase one of these kits to experiment with it while flying in the United States. This article is an amalgam of several e-mail discussions we’ve had about Stratux.

So what about Stratux? It’s a low-cost implementation of a lot of the same capabilities based on the Linux operating system and the ubiquitous Raspberry Pi computer. If you like, the Pi is like the motherboard in your computer. It uses a memory card as its only memory, has no keyboard, screen, or peripherals. The version I bought has Wi-Fi, four USB ports, a power-supply connector, and you can either buy a kit ready to assemble or simply buy the components and put the whole thing together yourself. 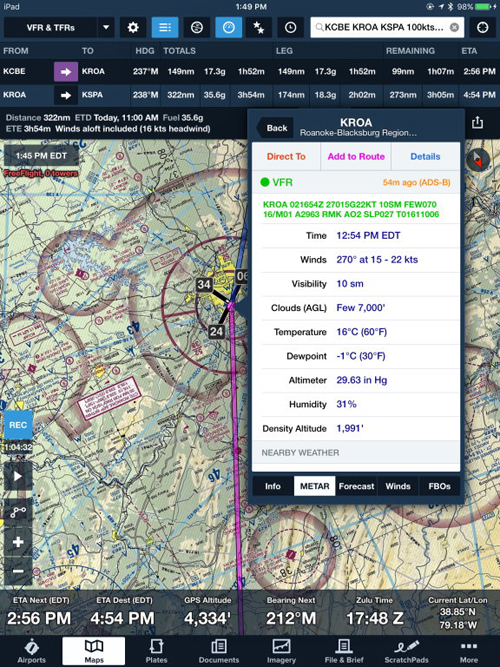 Key to this functionality is the “software-defined radio (SDR).” Imagine a digital tuner under the control of software, on a USB stick with an antenna connected to it. In order to get both 978 and 1090 MHz inputs for weather, NOTAMs, and traffic, two of these devices are needed in the United States. If you just wanted to use it in Canada, all you would need would be one for 1090 MHz, and it could be redefined for 978 if you went to the United States.

You can find SDRs online for about $10-$15 each, and they’re actually tunable all the way from 24 MHz to 1700 MHz. The software is basically tuning to these two radio frequencies and receiving the transmissions in digital form, which it then translates, communicates with Foreflight over a standard protocol for transfer of weather and traffic information, and then Foreflight just displays what it receives in real time.

I bought mine on Amazon at this link, but you can probably find other methods of buying exactly what you want. Mine didn’t work at first, but Vilros determined that the memory card was a dud and sent me another one by express mail. 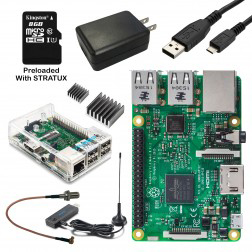 Stratux is also excellent as a GPS receiver. You can add the receiver for about an extra $15 if you have a device without its own GPS. 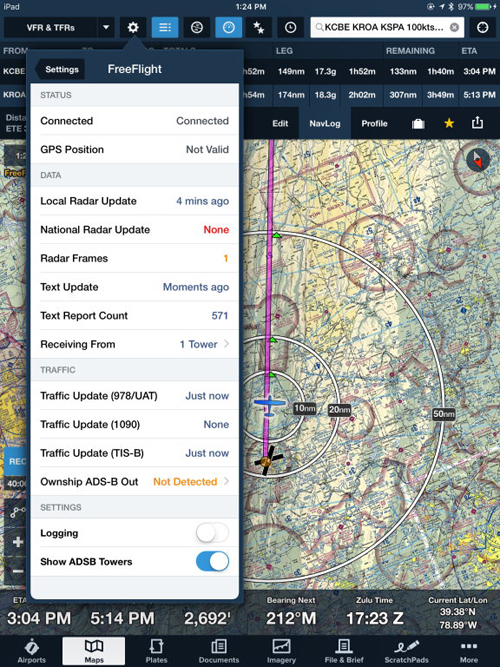 FreeFlight is the section within Foreflight dedicated to giving traffic, towers, and weather data, communicating with Stratux via Wi-Fi, and reporting how many towers it sees. As you can tell, it provides many parameters that can be changed.

So how is this useful in Canada? Well since ADS-B weather is not available in Canada yet, the application is only limited, but here are some reasons why Leo (I’m guessing) and I bought it.

It’s fun to adopt technology early and figure out how to use it.

If you do any flying in the United States, it’s certainly good to get full weather and traffic (or at least traffic equipped with transponders) without a subscription. Incidentally, doing longer cross-country trips in the United States usually implies that you’ll be flying at higher altitudes, thus reducing the likelihood of meeting an aircraft without a transponder.

You can see weather across the border, if you don’t live too far north. That can be useful, especially if where you live often receives its weather from over the border.

Stratux will pick up 1090 Extended Squitter broadcasts directly in Canada, so you’ll be seeing mainly larger commercial traffic, but at least you will see those. The broadcast weather in the United States is cut off exactly at the border.

Incidentally, since the two SDR dongles are software-defined, they are interchangeable. You need to be about 1,000 feet before you start to see any data. In Foreflight you will know you are receiving data if the red warning “FreeFlight 0 towers” at the upper-left side of the maps screen changes to white with a nonzero number, but that will only happen when you’re close to the border, or in the United States. You can adjust the transparency of the weather overlay. 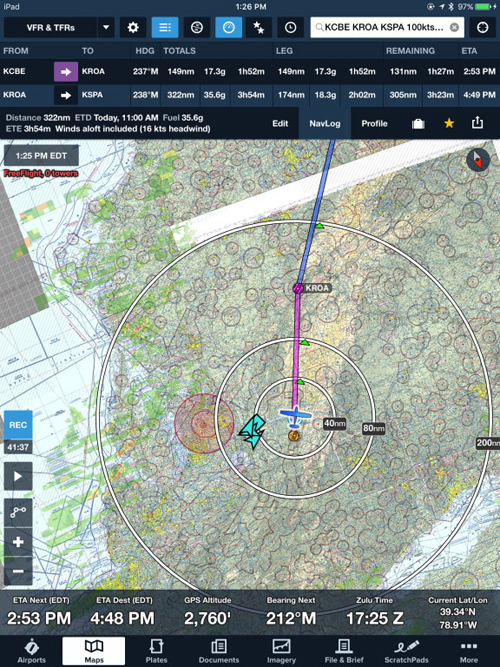 Rain visible 100 nm to the east

Foreflight will automatically pick up the signals from Stratux as soon as the Wi-Fi connection is made on your iPad. Just look for Stratux as a Wi-Fi node. You will also see the location of the towers on the map as soon as they are identified. Also note in this shot the ability to get more detail about a potential target. 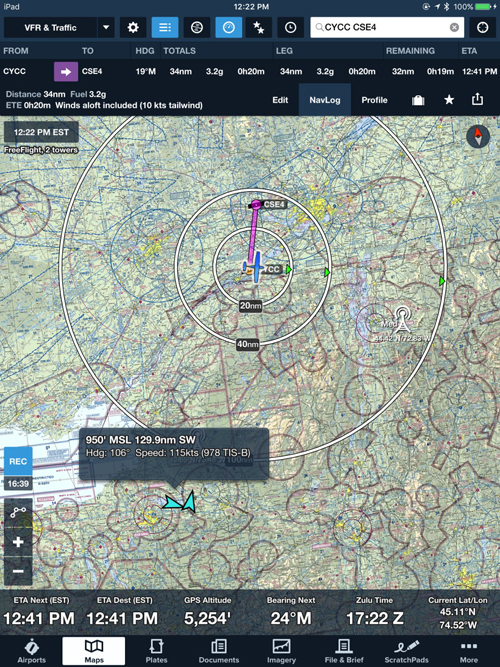 Towers displayed in New York state seen by an aircraft at Cornwall, Ontario

So where is Canada going? Well, as part of a worldwide organization, it looks like Canada will be doing the satellite version of ADS-B. The satellites should all be in place and functioning some time in 2017. You can read a Nav Canada presentation about what they’re doing with ADS-B here.

As far as this gizmo is concerned, my next purchase might be one of the many boxes available online as a neater enclosure. The two SDR dongles won’t fit in the Pi without removing their cases, so the whole thing winds up looking a bit ugly. Since it’s Wi-Fi, it can be put anywhere in the aircraft, but obviously within the length of the antenna cords. A nice mounting somewhere in the baggage compartment might be best.

Maybe Stratux’s largest advantage over all other aviation receivers is compatibility. If you look at the list of apps that it’s compatible with on www.stratux.me, you’ll see that Stratux is the most compatible receiver for people that use apps other than ForeFlight.