June 2016 - Ever since EAA Chapter 245, Carp, Ontario, President Phil Johnson’s Cozy took to the air, I’ve been suffering from a rare condition known as “joke block.” Similar to writer’s block it has struck me in my prime. I thought I had a few more years left but no. The Cozy’s surly bonds were finally slipped, and with it went my comedic ammunition. 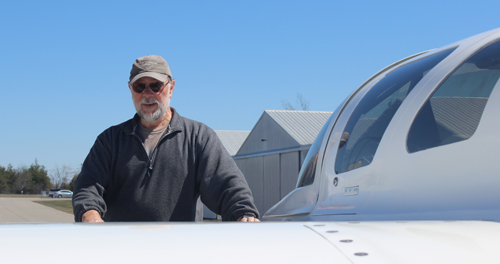 The Cozy and its happy owner, Phil Johnson

Before we moved to Canada, in 2003, I went on the EAA Chapter 245 website and there were a few pages of “builder’s projects.” One of those was Phil’s Cozy. I used to own a share in a Long Ez so the Cozy, which looked like it just needed a lick of paint to finish, caught my eye. I sent Phil an email saying that we were immigrating to Canada and that I had owned an Ez, and he wrote back suggesting that we meet at AirVenture. Sometime later I took a drive out to the airport and met Phil over a Saturday morning hot dog. I’m not sure if it was the familiar accent or the appreciation of all things “canard,” but we’ve been good friends since.

On a reasonably regular basis, and for quite a few years, I’ve made the trip to Phil’s house for a “plane and wine evening,” where Phil would take me through what he’d done to the Cozy since my last visit. As someone who’s not an engineer, but who appreciates engineering and likes to get his hands dirty, I nodded and tried to look intelligent as Phil attempted to explain the intricacies of mass airflow sensors or the finer points of electro-hydraulic actuators. Ever tried to teach a gibbon algebra? Similar end result.

I know that quite a few of you reading this have built your own aircraft, and many of them have been labours of love over extended periods of time. What astounds me the most is not the quality of the work, or the even the length of time taken, but the patience required to go back day after day after day. Kids grow up, dynasties fall, and yet the aircraft is still only the proverbial 90 percent done.

As the big day started to loom and there was nothing left for Phil to turn or mill, the realities of flying the Cozy on its maiden flight became more and more real. Having spent a generation building an aircraft, I can only imagine that the temptation to fly it yourself must be enormous. As I’m current in retractables and I have Long Ez time, I offered to do the first flight, and we started to discuss the practicalities of this.

Phil was understandably nervous but, for a while, it seemed like the best option.

However, fortune smiled on us both when Phil bumped into Rob Erdos, who just happens to be a professional test pilot. Surely Phil’s fairy godmother was lurking in the back of the hangar that day. Rob owns a Smiths Falls-based RV-6 and happened to be passing the Cozy hangar when Phil was there working. Impressed with the quality of the work, Rob offered to make the all-important first flight. 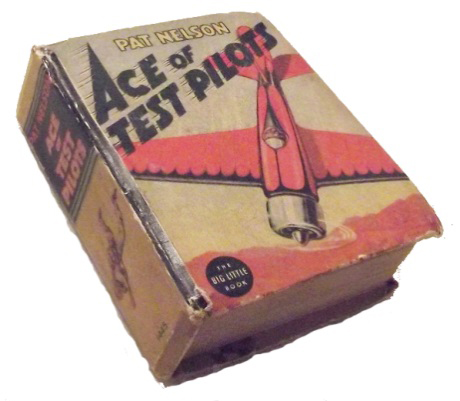 To help with the transition Larry Hill, who owns a Cozy in Muskoka, offered to let us do some transition training in his aircraft.

On a lovely Saturday in late April I flew Rob down in the Nanchang CJ-6 and, at my asking, he regaled me with test pilot stories on the way down and back. Rob has had a fascinating flying career and has volunteered to give a chapter presentation that will be one you don’t want to miss. 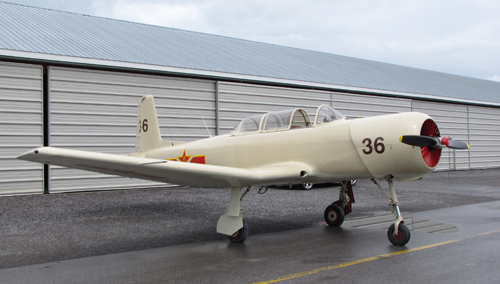 Understandably Phil wanted to limit the onlookers during the big day, so a small cadre of us assembled on May 1 at Phil’s hangar. Matt Pearson and I would fly chase in Matt’s RV, Peter Zutrauen would handle the camera paraphernalia, Malcom Penny would take Rob for a “warm-up” flight in his Long Ez, and Ritz was there for moral support. Following Rob’s guidance it was agreed that the purpose of the day was not to fly, unless we could find no reason not to hold off flying! This simple reversal of the goal really did take some of the stress out of the process, although you might not have guessed that had you witnessed Phil who was, quite understandably, pacing like an expectant father outside a delivery room.

After a high-speed taxi Rob and Phil brought the aircraft back to the hangar for a final briefing. Rob’s professionalism was evident, and the briefing was short, to the point, and everyone was clear on the plan and the various contingencies. The reality didn’t really hit home for me until, at the end of the briefing, Rob suggested that it would be a prudent if someone took down his wife’s phone number. Watching Phil attempt to enter the pass code into his phone, followed by the number, while his hands were shaking like a dog after a bath, lightened the moment ever so slightly.

There was now no reason anyone could think of for not flying, so Matt and I got C-GIME ready while Rob settled himself into the Cozy. We backtracked together while the Air Cadets gliders and tow planes flew overhead. Rob radioed that he was ready, so Matt and I took off and kept an eye on the Cozy as Rob accelerated down the runway. 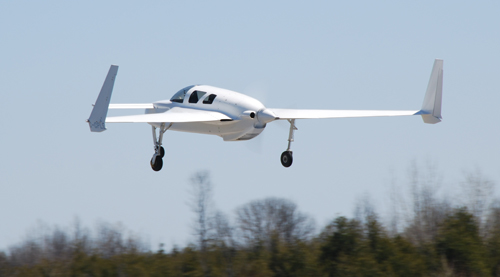 Once airborne Rob started to climb to circuit height, and Matt brought GIME round and slotted in at a 5 o’clock position behind him. 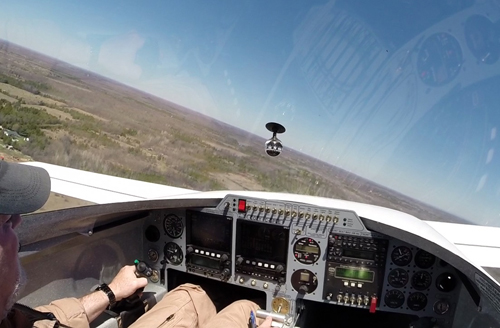 The plan was to climb above the field, but as Rob approached circuit height he noticed that the gearbox oil temperature had exceeded the programmed red line and made the decision to complete the circuit and land. The Cozy looked stunning in the air, and I can’t wait to see it with the wheels tucked away. After what looked like a long, shallow approach, Rob made a perfect first landing and taxied G-GPLE to the apron.

Despite the high gearbox temperature, the first flight was an undoubted success, and Rob reported that the Cozy flew well and was perfectly rigged. The group then retired to the Smiths Falls club house for some celebratory champagne and hot dogs. Quote of day came from Rob as he was cooking the hot dogs on the BBQ, “If it gets too hot, I’m shutting this thing down.” 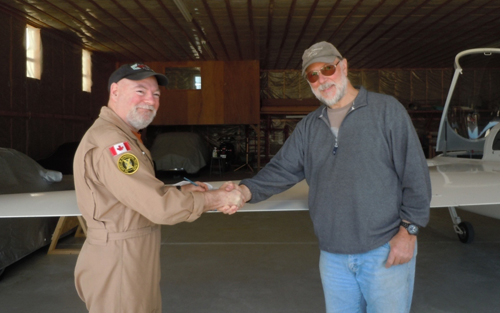 Phil Johnson and Rob Erdos after the successful first flight