Rendezvous With a Spitfire

As a boy growing up on a small southern Alberta farm in the early ’40s, I was excited about the war. I had an uncle in the Royal Canadian Army stationed in the Aleutians on Kiska Island fighting the Japanese forces, and I couldn’t get enough stories (real or imagined), concerning the struggle that we heard of but didn’t really feel in our insulated part of the globe. We did feel some of the effects of war with rations, with government and media propaganda, and with the lack of able-bodied men helping with the work on our farm.

We lived about 6 miles from a 12,000-man POW camp in Lethbridge where German prisoners of war were housed. And as the shortage of manpower became more acute, the government established a program where POW inmates were allowed to come out to farms and help with the work. Since we spoke German at home, these fellows must have thought they had died and gone to heaven – German-speaking households, home-cooked meals, and a bit of money in return for their work. During 1944 and toward the end of the war we had two men billeted with us: a submariner, and a ME109 pilot who had been shot down over the English Channel and then rescued by a British boat to become a prisoner of war.

His name was Kurt Eble, and he spent many hours with me, pretty much as my surrogate brother, telling me yarns about flying and helping me build model airplanes and gliders (I don’t remember ever getting one to fly). I remember how he taught me the basic construction of an aircraft, and I particularly remember him teaching me how a spar in the wing carried the load and forces acting on an aircraft. He probably had much to do with my eventual pursuit of aeronautical engineering as a career. 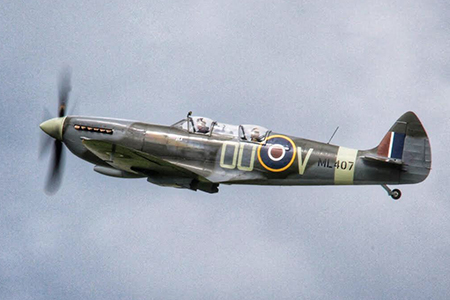 At about the same time, in early 1944 in another part of the world, at a factory in Castle Bromwich in Britain, a Mark IX Spitfire, unit ML407, was built that would see action throughout the last 12 months of World War II with six different Allied squadrons of the Royal Air Force’s (RAF) 2nd Tactical Air Force. It was delivered to 485 New Zealand Squadron on April 29, 1944, by Jackie Moggridge, one of the top lady pilots of the Air Transport Auxiliary (ATA), where it became the operational aircraft of Flying Officer Johnny Houlton DFC. Houlton was credited with shooting down the first enemy aircraft over the Normandy beachhead on June 6, D-Day. 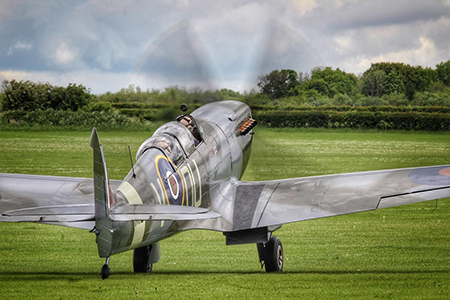 The run-up with that Merlin engine roar

In December 1944, ML407 was transferred to the 341 Free French Squadron. It then moved through various Allied squadrons until, at the cessation of hostilities, it transferred into a maintenance unit where it remained until being selected by Vickers-Armstrong at Eastleigh, Southampton, to be reconfigured to the two-seat version for the Irish air force as an advanced trainer. In all, it saw 176 operational combat sorties, amassing an impressive total of 319 combat hours. Eventually it was put into storage and offered for sale as a surplus unit. It was purchased by Sir William Roberts and placed in his museum in Strathallan, Scotland. 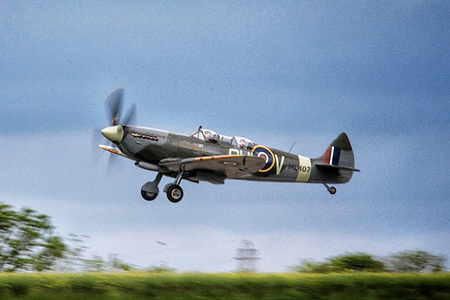 Aircraft design engineer Nick Grace had always wanted to fly a Spitfire and acquired ML407 in late 1979, then spent five years meticulously restoring it to flying condition. Nick completed this incredible project in 1985, and on April 16 the “Grace” Spitfire flew again with Nick at the controls and his wife, Carolyn, in the rear cockpit.

A cruel twist of fate occurred when Nick was tragically killed in a car accident in 1988, leaving behind Carolyn and their two children, Olivia age 5 and Richard age 4. In order to keep Nick’s memory alive, Carolyn took on the enormous task of learning to fly the Grace Spitfire. This task is documented in the very emotional documentary film Going Solo that can be purchased as part of the Grace Trilogy DVD set, a must for any library, from their website. This DVD set also includes The Perfect Lady, which documents the Spitfire’s history, including wartime footage and its remarkable restoration by Nick Grace. The third DVD is entitled Absolute Heaven, the story of the initial delivery of this aircraft to the front lines by Jackie Moggridge and the friendship that developed between Carolyn and Jackie.

I learned about the Grace Spitfire from Adam Smith, and following up on this I found an address through Rem Walker. I wrote to the address and expressed my desire to fly a Spit, a lifelong dream. I received a reply from Carolyn and, with a waiting list of about three years, entered my name.

I was scheduled to fly at 1100 hours with a pilot briefing at 1000 hours. Anticipating British weather, I had chosen to reserve my visit to Sywell, United Kingdom, from Wednesday through Saturday; wisely so, since Wednesday provided the inevitable rainy, low-visibility, and low-ceiling British weather. The next few days were booked, but Carolyn graciously rebooked me for Saturday, May 20.

We did! Alex flew around giving me an opportunity to enjoy the sounds of the Merlin, then I heard him say the magic words: “You have control.” Alex allowed me to fly, getting the feel of the controls. I found that the aircraft was very sensitive in pitch but rather heavier on roll. I had heard that roll control was also light but found it to be heavier than expected. Perhaps this is because of the dual cockpit controls and the added linkages. Rudder input was virtually unnecessary to see ML407 through a coordinated turn. Generally the flight reminded me of flying my RV-4.

Alex then found a hole in the clouds and performed a comfortable loop followed by a barrel roll. He again allowed me to fly, and I felt comfortable doing steep turns over the beautiful British countryside. We followed this with another barrel roll by Alex and then a flyby over the field and the routine landing.

I found the Spit to be an “honest” aircraft, doing exactly what was asked of it. I do not think it would take long for me to be able to solo this remarkable aircraft.

And so, over a period of some 75 years, my rendezvous with a Spitfire was finally realized. I would do it again in a heartbeat. For you hopefuls out there, contact Grace Spitfire and follow your dream.