June 2017 - I have many favourite airplanes. Actually, I like each one that I have had the opportunity to fly. This time it is a Pober Pixie; this one is the polar opposite of the Q2 I wrote about before. It is essentially a rework of the Corbin Baby Ace as done by one Paul Poberezny, former president and founder of EAA. I met him and Tom once, but that’s another story for another time.

A 65-hp engine powered the Pixie as well, this time a Continental. A single-seat, open-cockpit, Dacron-covered parasol built with a steel tube fuselage and wooden wings. Quite an anachronism when compared to the Q2 with its more modern composite construction. In flight it was very pitch-sensitive, and one really had to learn the use of the rudder because of the adverse yaw created by the full-span ailerons.

EAA Chapter 85, where I was a member, built this airplane and made it available for members to fly. One of the more senior members who was quite skilled at mountain flying undertook to lead a group of pilots on a flight to a number of out-of-the-way mountain strips to teach first-hand the joy of this type of flying. 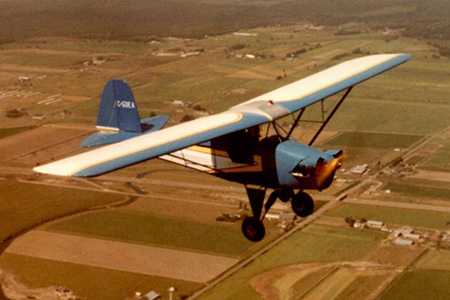 The Pober Pixie in flight

Three of these strips were Stave Lake, Tipella, and Silver Creek. In one case — Silver Creek — the landing area was little more than a wide area on a logging road. Our leader also taught us the advantage of getting close to a cliff face and using the rising air there to gain height instead of spending a lot of time grinding upwards in the middle of a valley. The aircraft that we used that day were well-suited to this type of flying. We were joined by a Piper J-5, a Luscombe 8E, and a Champ. 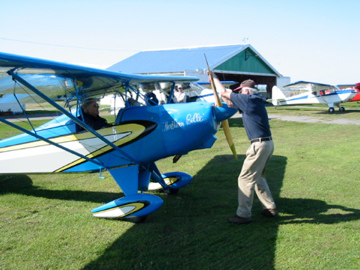 No electric starter on this puppy

This trip broadened the utility of my own aircraft, as it has enabled me to go into other strips that, while they might intimidate me, are now doable due to this experience. Places like North Pender Island, Flying M Ranch, Fort Langley, Delta Heritage Air Park, Trethewey, Saltspring Island, and others. Most are one way, and one is as short as 1,200 feet, but more about these fields another time. Time passes for all, and that includes airstrips. North Pender and Saltspring are gone now, sad to say.

On the other end of the airport scale, one Saturday in early spring, several of us decided to go to an open house at Boeing Field in Seattle. I took the Pixie again, secure in the knowledge that my friends would help me to get into the positive control zone as the Pixie was sans radio, transponder, electrical system, etc. We flew from Delta Heritage Air Park to Bellingham, Washington, for customs and then on to Seattle for the fly-in. While on the ground there it was quite a nice day, but on the trip down it was very cold. Remember that this was open-cockpit flying. I had on gloves and insulated coveralls, plus the mandatory leather helmet and white silk scarf. However, that was still not enough, and I was decidedly hypothermic on arrival. Furthermore, I was facing the same airtime on the way home; however, I eventually did warm up.

Because of a prior appointment, I had to leave for home earlier than the others. As I was NORDO, I phoned the tower for lights, and they were only too happy to accommodate me. As I launched I was very self-aware, certain that I was the centre of attention in my little blue, white, and yellow plane. Such was not to be the case, for just as I lifted off there was a terrific roar beside me, and a Northrop F-5 Freedom Fighter departed on the longer parallel runway. I doubt if any one even saw me. Airtime that day was 3-1/2 hours. Overall I’ve logged 58-1/2 Pixie hours in 84 flights.