A Dog Named Jasper or Was It Shadow?

August 14, 2017 - Jasper, or maybe it was Shadow, was a flyer, not a pilot. He needed a human for that, and he had one. Dan was his name, and he was an old-timey pilot who flew an old-timey Champ — you know, the one with a tail wheel.

Whatever the dog’s name was, he was an Irish setter. A big red dog and as dumb as only a setter can be. Always sticking his big wet nose into other peoples “businesses” as some big dumb dogs are wont to do. Hey, I always wanted to use that word — wont.

This suited Jasper just fine because Dan was a pretty good pilot, and Jasper had a tail wheel to wet down after every flight. 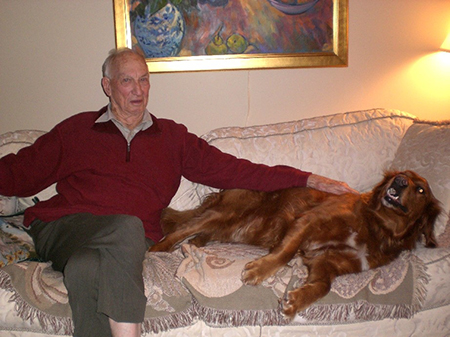 Dan and Jasper — or was it Shadow?

One time Dan had to renew the fabric on the Champ and, as these things usually do, it took a bit longer than either Dan or Jasper liked. While Jasper had a pretty short attention span, he had a long memory. One Sunday afternoon when Jasper hadn’t been flying for about six months, a newly restored and different coloured Champ (not Dan’s) showed up at the field. While dogs are supposed to be colour blind, Jasper knew a Champ when he saw one. And since the door had been left open, well, that was a pretty clear invitation to go flying, and so into the back seat he went. Tongue hanging out and a big goofy grin on his face, he flatly refused to get out. Well, at least until he was made a better offer in the form of a ham sandwich.

Another time, Jasper and Dan were on their way across the straits of Georgia and, as neither had a radio, couldn’t talk to Vancouver centre and were boogying along at 1,500 feet over the salt chuck. As every pilot knows, the engine always goes to rough once past the centre of any large body of water. In this case, the engine went to idle. Dan pushed the throttle back up and all was well — for a few minutes — and then it went back to idle. Dan, being the old-timey pilot that he was, knew that what was happening was not normal and so became somewhat focused on the throttle position. As he was watching, the throttle went once more to idle and then back to full power this time. Dan turned to look in the back seat and, lo and behold, Jasper had the throttle in his mouth and was playing with it, moving it back and forth, just for something to do. A few sharp words advising Jasper to cease and desist, and that flight ended well.

Irish setters seem to have an affinity for water, and Jasper was no exception. On a trip into a number of backcountry strips with a group of tailwheel newbies, Jasper came along. At one stop, there was a glacier-fed stream beside the airstrip and, of course, Jasper jumped out, watered the tail wheel, and promptly jumped into the stream. The water had recently been solid ice and was more than a little bit cold. The shock of the cold almost caused Jasper cardiac arrest as he was completely incapacitated and required rescue. It took a few minutes for his recovery, whereupon he thanked his rescuers by shaking a significant amount of river out of his coat. The ride home was fine as the Champ was well ventilated, and the smell of wet dog soon dissipated.

Neither Dan nor Jasper/Shadow are no longer with us, but the memories are forever.