August 14, 2017 - Having surpassed the 2 million Young Eagles mark last year would have made most people think, “Okay, so what’s next,” but none of us could have imagined what was in the pipeline. In guarded tones we heard, “There is something big coming, but I’m not allowed to talk about it.”

Well, we found out late in the week of EAA AirVenture Oshkosh that Stan Lee and his charitable foundation for childhood development and education has created a new character, Aviore, to match his Marvel comic book heroes Spider-Man, Incredible Hulk, X-Men, and other characters. Lee was in Oshkosh to promote Aviore, with the help of EAA CEO and Chairman of the Board Jack J. Pelton and Aviore himself. Apparently Aviore does not have any specific special powers yet. “The point is, whatever comes up, he’ll handle it,” Lee said. “If he doesn’t, we’ll hire a new one.” Lee also told the young Aviore that he doesn’t get to just stand around. He wants him to be rescuing people. 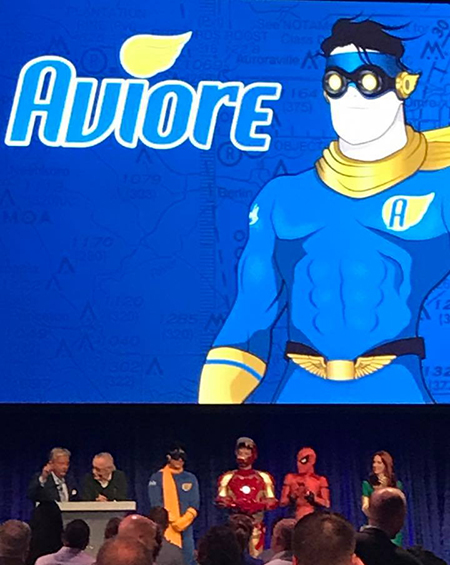 The serious part of all the fanfare was to get youngsters interested in science, technology, engineering, and math (STEM) and careers in aviation with the help of Aviore, who was dressed in blue and yellow with dark curly hair and heavy flying goggles. You can see the announcement video hosted by Pelton and special guests Lee and Aviore on YouTube. You can find the Aviore segment about four minutes into the video, but the rest of the video contains some interesting information including a segment on Pipistrel’s all-electric training aircraft.

Did you know that Lee has a cult following among people who love to watch Marvel comic book character movies? He seems to be known for making cameo appearances in each of those films.