Recognition for One of Our Founding Fathers

At our Canadian Breakfast at EAA AirVenture Oshkosh 2018, we presented a plaque in recognition of the many years of service by Father John MacGillivray to EAA and Canada. The plaque reads, “In recognition of a lifetime of support to EAA and Sport Aviation in Canada.” It goes on to state, “His enthusiasm as a pilot and talents as an author and poet, his contributions as an aviation historian, and donations of aircraft inspire Canadians to this day. As EAA’s unofficial chaplain from 1960 to 1993, John’s compassion and care for EAA members and their families in times of need will always be remembered.” Jack Neima, who is not only a member of the EAA Canadian Council but also Father John’s nephew, gave the following address. — Ed.

Father John MacGillivray was a well-known Canadian aviation enthusiast who had a keen lifelong interest in aviation history. He served in the Royal Canadian Air Force where he enjoyed a 25-year career as a Roman Catholic chaplain until 1976 serving at RCAF stations in Canada and at the Canadian Forces Base Baden-Soellingen in Germany. He learned to fly and obtained his private pilot license in April 1956 in Moose Jaw, Saskatchewan, just before being transferred to RCAF Station Summerside, Prince Edward Island. It was at Summerside that he learned about and joined EAA. Shortly thereafter, he acquired a DH.82C Tiger Moth, which was being struck off strength by the Royal Canadian Navy. The Moth was registered as CF-IVO, and after getting checked out in the aircraft he started planning to fly to EAA’s annual fly-in and convention at Rockford, Illinois, in the summer of 1959. 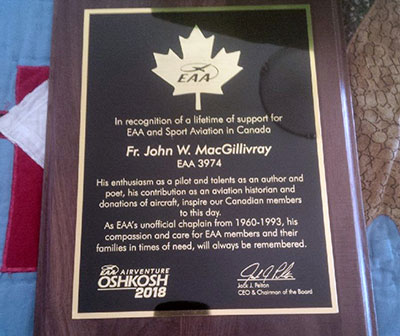 This was a serious undertaking for a low-time pilot with less than 100 hours in his logbook and on his first long trip in an aircraft that, by today’s standards, was very under equipped. Navigation was by dead reckoning and compass, and the trip was made without radio communications. He departed Moncton, New Brunswick, on August 3 and arrived at Rockford on August 8 with stops at 14 towns in Canada and the United States. While at Rockford, he had the opportunity to meet a number of EAA pioneers who were to become close friends in the decades that followed. These included Paul Poberezny, Marty and Ruth Haedtler, Steve Wittman, Pete Bowers, and, as he said at the time, “More swell people than I can remember.”

The trip to and from Rockford lasted 10 days in total, and he logged 39 hours and 40 minutes, but it was the start of a lifelong love affair with EAA. Apart from the two-year posting to Germany, he never missed an EAA convention until his death in 1995. John’s account of that first trip to Rockford appeared in the October 1959 edition of Sport Aviation, and it describes vividly the experience and the emotions he felt.

While in Germany he acquired a 1935 Miles Hawk, which he shipped home to Canada to his new posting at RCAF Station Chatham, New Brunswick, which also became the new home of the Tiger Moth. In the summer of 1963, he and the Moth made another return flight to Rockford, and during this EAA fly-in, the subject was broached by Paul Poberezny that, now that his attentions were shifting to the Hawk, he should consider donating the Moth to the fledgling EAA Air Museum, then located in Hales Corners, Wisconsin. Discussions continued after he returned to Chatham, and the deal was eventually agreed to after some interesting interventions. It was decided that the Moth would be delivered to Hales Corners after the 1964 fly-in, and with Pete Bowers as passenger, he flew the aircraft to Hales Corners where it became one of the first aircraft in what has become a world-renowned collection.

Over the years, John became known as EAA’s unofficial chaplain, and his pastoral services became very important during times of difficult and unfortunate events. He was renowned as an aviation historian and as a talented writer who penned a number of well-known pieces including An Airman’s Grace, which is still widely used at aviation functions worldwide. He participated in the official opening of EAA’s new headquarters and museum facility in Oshkosh in July 1983 delivering a moving invocation that was widely reported. He was also well-known as a guest speaker at Canadian Aviation Historical Society events across Canada.

John’s philanthropic activities didn’t end with the donation of the Tiger Moth in 1964. Years later, he acquired a Taylorcraft BC-12 and arranged to have it restored by EAA Chapter 77 in Flint, Michigan. Following the restoration he donated the aircraft, registered N77FJ, to the chapter, and it is still being flown by the chapter’s affiliated flying club, which is named the Father John Flying Club.

The Miles Hawk also eventually found its way to EAA’s museum, although it was subsequently returned to England. He also acquired a 1931 de Havilland DH.80A Puss Moth and arranged for this aircraft to be registered with the letters CF-PEI as a tribute to the first Puss Moth to have been stationed on Prince Edward Island, which had been bought and flown by aviation pioneer Louise Jenkins in the 1930s. That aircraft is now on display at the Canada Aviation and Space Museum in Ottawa.

John embodied many of the attributes that define EAA members in Canada to this day, and his fine example of philanthropy and support for sport aviation continues to inspire. It is for these reasons that EAA’s Canadian Council has chosen to recognize, posthumously, his contributions over many years.

Accepting this award on behalf of John’s family is his nephew, Jack Neima, who currently serves as a member of the EAA Canadian Council. 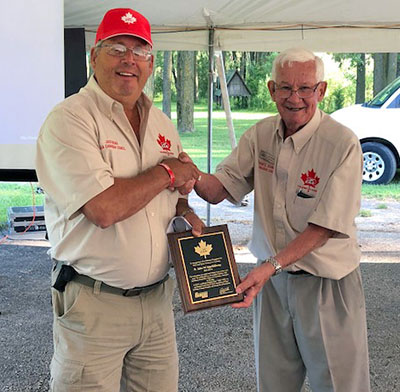 Jack Neima accepts the plaque from Canadian Council Chairman Jack Dueck on behalf of Father John MacGillivray and his family.

Thank you Jack (Dueck). On behalf of Fr. MacGillivray’s family, I am honoured to accept this recognition award, and I thank the EAA Canadian Council for remembering his contributions to sport aviation over a long and rewarding lifetime. My late mother was Fr. Jack’s only sister, and he had three brothers of which two are still with us and who will be thrilled by this recognition.

Fr. Jack inspired many people, and his legacy continues to inspire to this day. As a young boy growing up in the early ’60s I was thrilled by the stories of his aviation exploits, particularly his annual trips to Rockford and Oshkosh. These stories incubated and fuelled my own aviation passions and led me to become an avid pilot and aircraft owner. His example also inspires me to give back to aviation, and I am thankful for the opportunity to do so by doing what I can to serve the Canadian Council.

In closing I would just like to share an interesting story related to the donation of the Tiger Moth back in 1964. At the time, Fr. Jack was serving as the Roman Catholic Chaplain at RCAF Station Chatham, New Brunswick. As the station’s padre it wasn’t an unusual experience to be summoned at all hours of the day or night to provide pastoral services, so a middle of the night call from base operations to come quickly to the control tower was taken in stride. When he arrived there and asked what was the nature of the emergency he was told that his presence was requested by the pilot of an overflying aircraft. It turned out to be Paul Poberezny flying high overhead in a U.S. Air National Guard aircraft on his way to or from Europe. During the brief VHF radio conversation the donation of the Tiger Moth to EAA was finalized. It’s just another Paul Poberezny story that illustrates his focused and unwavering commitment to EAA, which continues to serve as a great example to all of us.

Thanks again for recognizing Fr. MacGillivray in this way. It is a great honour. 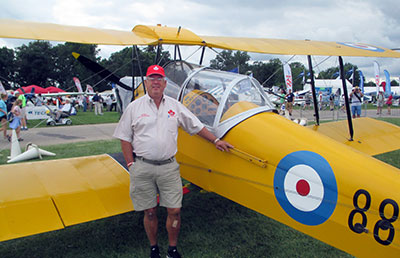