The Unofficial Youth Programs at AirVenture!

August 2016 - Much has been said and written about the EAA youth programs throughout the years, including the two millionth Young Eagle having been flown on Thursday at EAA AirVenture Oshkosh 2016 by Harrison Ford. There are little things we do to encourage our young aviators like these pedal-powered kindergarten aerobatic wannabees. Kudos to the folks who put this little scene together. They probably got more out of Oshkosh than anyone. 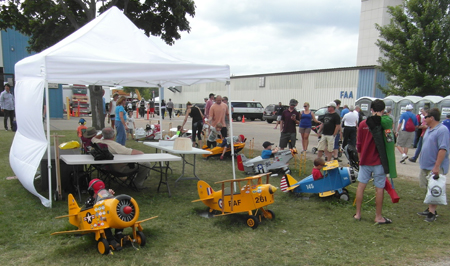 I thought I’d just relate a little story about another aspect of how our aviation community develops children into accomplished adults. The reflection on the screen of my iPad was getting to me. My copilot and I had had serious discussions about choice of T-shirt colours to minimize the reflections, or maybe building an iPad shade. I decided to look for a solution in Hangar C. Having just spent some time finding out about the next generation ForeFlight maps, I found right behind the ForeFlight booth was MyGoFlight, which sells accessories that make the integration of portable aviation devices into our lives a lot easier. Behind the counter was a smiling young boy with blue lips. Since he was definitely below the demographic for a heart attack, I assumed he’d just finished a blueberry Popsicle. His name was Owen.

Owen asked me how he could help me. Suppressing my desire to chuckle at his youthful exuberance, I just started telling him what I was looking for. He at once started asking all sorts of qualifying questions like “What kind of iPad do you have?” and “Is that the Mini 2 then?” He led me to the section with the ArmorGlas products for the iPad and launched into a detailed description of the benefits and told me that I could have it installed for free at the show. He said “If I had my knife handy I could show you how scratch-resistant they are!”

So here’s the thing. Owen is 9! It’s his second year at the show and his 12-year-old brother Griffin’s fourth, so they both started assisting in the booth when they were 8. Their dad, Jason Schermerhorn, vice president at MyGoFlight, is proud of his boys, and so he should be. These youngsters are learning all sorts of grownup lessons as well as evidently having loads of fun. I’ve never been a huge fan of making sure that everyone gets a medal at the soccer match—win or lose. I think it dilutes the reward for real achievement. I’m sure Owen was really proud of his sale. Yes, I bought the ArmorGlas he proposed, but I’m also confident in saying that he will learn just as much from the sales he didn’t make. 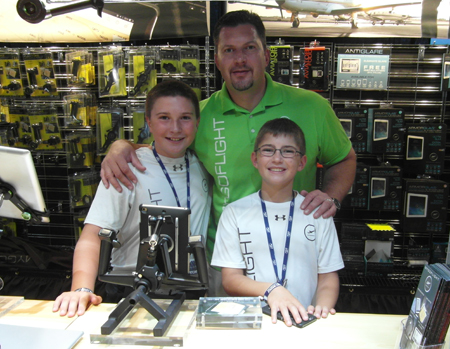 Incidentally I went back the next day because there was one tiny speck of dust right at the edge. Someone else’s son took care of me and replaced the screen without having to get the approval of a grownup. It worked spectacularly well on the flight home in bright sunlight. Dads and moms all over the AirVenture grounds seemed to be just as engaged in bringing up smart, well-behaved children, and it was delightful to see.