Yukon Challenge – The week in Whitehorse

September 2016 - Last month I told you about the cross-Canada flight from Haliburton, Ontario, to Whitehorse, Yukon, in our classic 1958 Cessna 172. Sharp-eyed readers picked out our “oops” in reporting gusty winds at Whitehorse at 180 mph, which of course should have read 180 degrees. This month, let’s explore what we did with the Century Flight Club once we got to Whitehorse.

We had lost a day from our travel plan due to weather, so our arrival in Whitehorse was only about two hours before the kick-off barbecue. However, we were able to get the plane tied down and ourselves transported to the hotel with time to clean up and be shuttled to the event. The barbecue gave us an opportunity to reunite with friends from our 2014 Nanaimo trip and to enjoy the company of new friends made along the way this year. This opening barbecue was held at the MacBride Museum of Yukon History, which we were invited to visit to get our initiation into Yukon history. Great food and local Yukon beer (slogan: “Beer worth freezin’ for”) made for a fantastic start to the week. As the evening was winding down, the museum was happy to lend the bolder aviators some photo costumes, which made for some interesting group photos – everything from lumberjacks to cancan girls.

Monday’s schedule found us in the hotel conference room to hear a presentation from Robert Cameron. This writer/aviator has published a fantastic history of flight in the Yukon, complete with an extensive photo library. He told us of the trials that many faced in attempting to get various air services started and running profitably in a territory with a harsh environment and with equipment that was not often well-suited to the demands. The challenges were extreme and only a few of the start-ups were up to the task. Rob had a long line of people waiting to buy his book, Yukon Wings, when his presentation was over.

After lunch, most headed back to the airport to meet the fuel trucks and get prepared for the fly-outs. Planned outings were to Carcross on Tuesday, Dawson City on Wednesday, and Haines Junction on Thursday.

Carcross airport is only 34 nm south of Whitehorse following the Watson River. With low overcast and rain forecast in the morning, we decided to just enjoy a shuttle by van instead of braving the weather by air. About 20 aircraft did make the flight with no problems. The drive had its benefits, giving us the opportunity to stop at Emerald Lake and to see the Carcross Desert close up. Weather was good for the flight out in the morning, but light rain set in for a couple of hours before things opened up again for an easy flight home. The local Carcross team had resurfaced the runway just before our arrival, eliminating the gopher holes reported in the Canada Flight Supplement (CFS). Winds for the morning favoured landing on Runway 23. For us spectators, this worked out fine. Aircraft were landing towards the parking area, where we enjoyed watching the skills of everyone putting their aircraft onto this short gravel runway. A little bit of rain was hardly noticed, given the freshly made, still-warm doughnuts and hot coffee provided for us to enjoy. 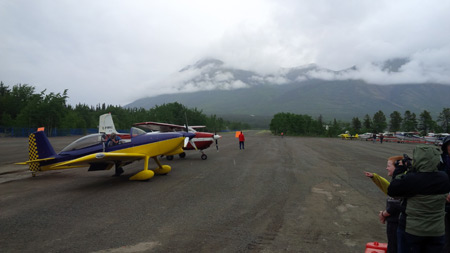 One on final at Carcross

We took a short 10-minute walk into town, toured the shops, and enjoyed lunch. Pilots and crew were given a special discount at a local bakery. After lunch the former premier of the Yukon, Willard Phelps, took us on an interesting historic walk through Carcross, recounting many amusing tales of what life has been like in this small village.

For dinner, we were shuttled out to Caribou Crossing. This is a museum/park with beautiful taxidermy displays, live animals, and an excellent banquet facility. During dinner we were treated to readings by a local poet. When visiting the Whitehorse area at the summer solstice, no one worries about leaving dinner to get home in daylight. There are only four hours between sunset and sunrise, so flying hours are long.

The scheduled fly-out for Wednesday was to Dawson City, 232 nm away. We chose to skip that one as we had not yet found time to tour the city of Whitehorse itself. Carrie and I put on our hiking boots and set out to explore. We found that Whitehorse folks sure respect their pedestrians! Unlike our bigger cities, traffic both ways would stop at the slightest indication that we wanted to cross a street. What a treat! We climbed the plateau to the airport level and visited both the Transportation Museum and the Yukon Beringia Interpretive Centre. Both were well worth the climb to the top. Our walk took us down to the far end of town to visit the S.S. Klondike, a well-preserved stern paddlewheel boat. With excellent restaurants, a beautiful riverwalk (and train ride if you wish), and perfect weather, we didn’t regret missing out on the Dawson City flight.

Our final fly-out was on Thursday to Haines Junction, 78 nm west following the Alaska Highway. The weather cooperated with fantastic visibility and high ceilings. We planned to overfly Haines Junction to go north to Silver City, then over Kluane Lake, followed by a trip along the Slims River Valley to overfly the Kaskawulsh Glacier. This short circuit alone would have made the entire trip worthwhile! Absolutely breathtaking scenery that is best appreciated from a small plane travelling at the mountain peak level. Spectacular! 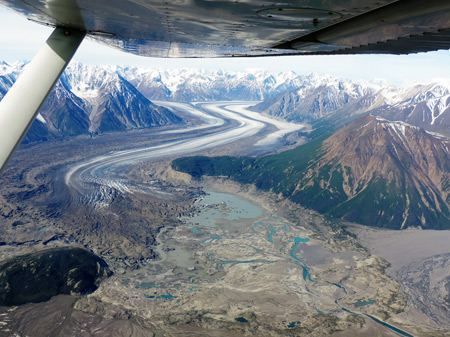 Glaciers flowing together near Haines Junction

Haines Junction has a lovely airport, and the view on final approach is stunning. On arrival, our trusty Century Flight shuttles were on hand to take us into town for lunch. Sitting on a large deck with a light breeze, sunshine, and snow-capped mountains as the backdrop made for the best of lunchtime experiences. Does it get any better than this? 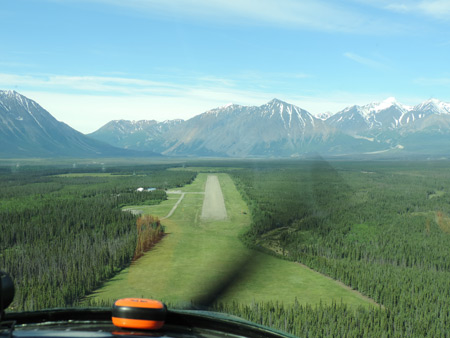 We did have a deadline to meet, as the close-out banquet was that evening back in Whitehorse, and we certainly didn’t want to be late for cocktails! We simply followed that Alaska Highway back into Whitehorse, tied down, and had lots of time to don our best T-shirts and finest jeans for the event, held at the beautiful Kwanlin Dun Cultural Centre close to the river. John Lovelace announced the plans for Century Flights over the next three years. For details, hit their website and decide which ones you want to sign up for. He also announced that Century Flight had purchased a membership in the Carcross Aerodrome Society for all participating pilots, and membership cards were distributed. 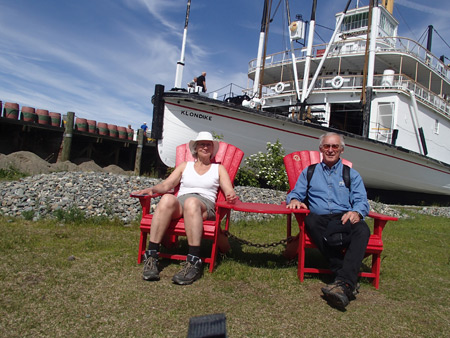 Chilling at SS Klondike in Whitehorse

On our return flight to Ontario, we obeyed what the prairie pilots told us: “Get your flying done early.” We were usually up around 5 a.m. for an early start. One day took us from Peace River to Cold Lake to Prince Albert to Brandon. Only moments after leaving Prince Albert, Winnipeg Radio broadcast that a line of severe thunderstorms had erupted from Prince Albert north to Meadow Lake, a path we had crossed less than an hour prior. If not for our early start, our plans to make Thunder Bay for a family reunion event would have been in jeopardy.

For those who are still hoping to do a major cross-Canada journey, I would highly recommend joining a group event. Pilots benefit from the flight planning, fuel discounts, and shuttles, and the whole family benefits from the planned events and making friends with like-minded people from across the country. Don’t wait to find the time. Make the time to do it!