Intercepted by a Herc!

September 2017 - Have you ever been intercepted? There are times when you might actually want to be. If you’re not feeling well, are lost, or are stuck on top and looking for a guiding hand to a hole in the clouds, you might like to see a great big airplane beside you.

Lee Arsenault and Marilyn Staig arranged a small group get-together for the last week of August. They told a few of their friends that they were organizing a flight to Summerside, Prince Edward Island, and they arranged for a golf game, some Acadian music, and a trip to the beach. Thirty-two planes arrived at Summerside, and we had a great time. Coinciding with our visit, the Royal Canadian Air Force (RCAF) also came to use the airport as a training base for the week. Lee was immediately “voluntold” to the rank of group contact for us with the C-130 crew. All week long we watched them flying low and dropping gear on crash sites, and then the search and rescue (SAR) techs would parachute out.

Imagine my reaction when Lee walked up to me on Wednesday and asked if we would be interested in assisting the RCAF crew with their training. I’m not sure the question was completely asked before he had my answer.

The next morning we were briefed by the mission commander, Keith Hoey. He’s been flying for more than 30 years, and he now trains the crews as they become search and rescue specialists. He said he wanted two planes to fly out and wait for the call to report an incapacitated pilot. We went first, and the second plane left a little later and did the same thing except that on the way back to the airport they were instructed to report an engine failure forcing the C-130 crew to deploy the SAR techs. It was going to be a busy Hercules cockpit with pilot, copilot, navigator, and flight engineer, plus the mission commander teaching the pilots and the navigator and flight engineer instructors. In the back of the plane were two SAR techs and the loadmaster. 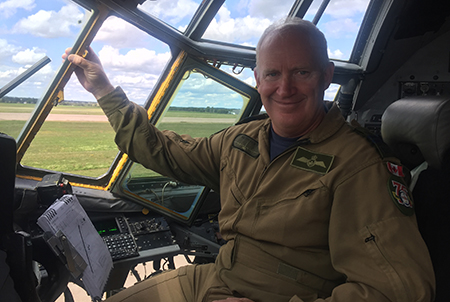 Game on! We flew out about 20 minutes west of Summerside and did lazy circles until we got the call. “Foxtrot Mike November Uniform, this is Thunder 337.” Once Keith declared the operation was a go, I turned the radio over to Zeno, my passenger, and she started asking for help. They wanted to do several blocks of training. To make it as difficult as possible, I turned off my transponder. No need to let my traffic collision avoidance system (TCAS) help them find me. They had Zeno talk while they did direction-finding from a couple of locations, and then they drew the lines to get an intercept point. They also asked her to describe what she could see. They asked her what was wrong. Apparently I was vomiting and in pain. Then out of the north came this C-130 about a thousand feet below us, and as it disappeared out of sight, Zeno cried out on the radio, “Don’t leave me!”

After assuring her that they had a visual on us and were just making a turn to come around under us on the right, they appeared again. They provided us a heading for the airport and led us back there by doing racetrack circles off to the right. I had slowed down to 95 knots just to make the pilot work harder to stay with us. Zeno played the part of an anxious and highly stressed passenger for about 30 minutes. As they released us from the exercise, they told her she deserved an Oscar nomination. 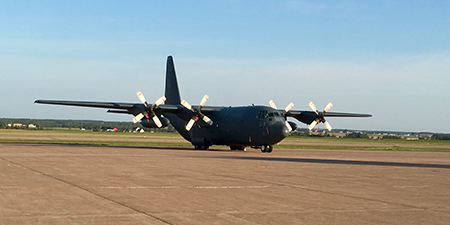 Herc on the ramp at Summerside.

The search and rescue guys were wonderful, informative, and welcoming. They do a great job, sometimes at enormous personal risk. They wanted us to remind everyone to always file a flight plan and fly that plan.

We thoroughly enjoyed assisting them. I hope to never need their services, but it’s fantastic to know that when they come looking for you, they have the best crews in the world on those aircraft.