September 2017 - A week before EAA AirVenture Oshkosh, Jack Dueck and I were at the Lethbridge International Air Show where I had my RV-7 on static display. The final day of the show, the weather forecasts were calling for extremely strong winds, so we decided to pack up the site and return home before the winds really hit. As it turned out, it was a very good decision. I heard of many different challenges that other pilots had getting out of Lethbridge after the show. In addition to the winds, visibility was reduced to almost nil due to the smoke and haze from the British Columbia forest fires.

Due to the military aircraft parked on the taxiway, we had to push the plane by hand on the dry grass alongside the taxiways, which must have been inhabited by a million gophers. At least, there were enough gopher holes to suggest that. An RV is a very efficient and quick airplane when it’s flying forwards. However, when it’s being pushed by hand, it’s easiest to push it backwards. While a group of friendly helpers was pushing the RV by the leading edges of the wings, I was guiding the tail, trying to dodge the craters that the gophers had made. You can visualize those Spitfire and Hurricane pilots taking off from their battle-damaged airfields during the Battle of Britain. Crater to the left, crater to the right. Now there’s a crater straight ahead. Yep. Unfortunately, with only about 20 feet of grass between us and getting back on the taxiway, the tail wheel dropped into the mother of all gopher holes. It was enough to break the weld that holds the tail wheel assembly to the tail wheel stinger. Ugh. And we were running out of time to depart before the airport shut down for the air show.

After some head-scratching, I felt that if I could build a tailskid, I could take off from there and fly home to my grass strip. It wouldn’t be the first airplane to fly with a tailskid. In fact, my dad’s Gypsy Moth has been flying for many years with a simple tailskid. At home, I could put more resources into fixing the tail wheel properly.

Fortunately, airports typically have resourceful people around. A few guys came to the rescue. Marty had some aluminum C-channel in the back of his truck, and Larry and Ed had some tools at hand. Within about 20 minutes we made a tailskid that bolted on in place of the tail wheel assembly, and I did a very quick mental weight and balance calculation.

With permission from the air show boss and the control tower folks, I was given a window of time to walk the plane out to the runway. I had to carry the tail of the plane a hundred meters or so, while my helpers again pushed on the leading edges. Carrying the tail of an airplane is never easy, especially when it’s around 60 pounds. By the time we got the plane out to the centre of the runway, I was certainly huffing and puffing. I gotta get back into some sort of cardio shape. Regardless, we lined the plane up on the runway with the wind blowing about 20 mph straight on the nose. Once everyone was clear and I was back on the taxiway, I started up. My window of time was quickly ticking away, but I made sure I went through the complete run-up procedure.

I applied the brakes and ran up the power of the engine and pushed forward on the control stick. Releasing the brakes I heard the tailskid drag across the pavement for a brief moment before the tail lifted, and off I went. Larry commented later that the skid didn’t drag any more than 3 feet on the pavement. That wind that I was trying to escape from was quite handy for a short take-off roll.

The flight home was uneventful and, if anything, was a mile or two faster than normal without the tail wheel dangling in the wind. There you go. There’s a speed mod for all you Reno racers out there.

The landing was also uneventful, and I was even able to steer the RV back to my hangar strictly using rudder control. Thanks goodness for grass runways and taxiways.

The next few days were focused on getting the tail wheel repaired for my departure to Oshkosh only days away. But that’s another story. The picture of our highly engineered tailskid post-flight shows nary a scratch on it. The skid was angled such that the leading edge of the skid was off the ground by a couple of inches. 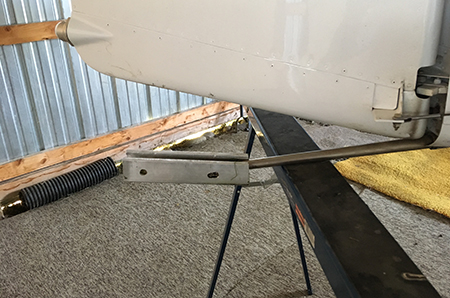