September 2015 - I’ve flown my own Pipistrel Sinus for many years, (one year for more than 500 hours). Recently I was helping another Pipistrel owner pilot better understand how a Pipistrel flies. During the last two flights on his Pipistrel aircraft, I was confused, and I did not understand well what was going on. 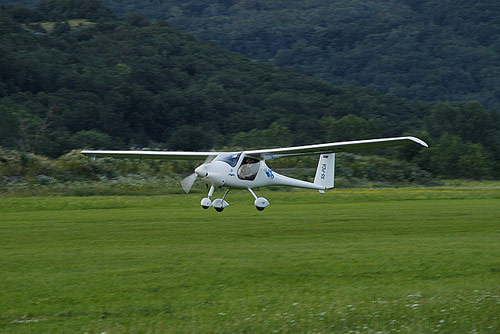 Both landings were made with full airbrakes and full flaperons into light wind. When landing this aircraft with light wind, we want an airspeed of 50 knots and flare at 40 knots; as the book indicates, stall speed is 34 knots.

On both landings we had an excessive nose-up attitude and at about 300 feet AGL, when we glanced at the ASI to make sure we were landing at the right speed, we both noticed a higher speed than we wanted. Both of us tried to reduce the speed to 50 knots.

The owner pilot did the second-to-last landing in a manner that would make one want to do the next one a little better. I did the last landing, in a manner that no one wants to do again. Well, I bounced so hard that the nose-wheel fairing disintegrated and the tip of one of the prop blades touched the tarmac.

On this aircraft equipped with two airspeed indicators, during the last flight, well before landing, we compared airspeed readings several times while flying straight and level at cruising speed. The analog ASI, the Dynon digital ASI, and the Dynon GPS speed readings were about the same (wind was very light).

So here’s the question: What was going on?
What would a smarter-than-me pilot have done differently?
You are invited to send your responses to bitsandpieces@eaa.org

We will have the answer next month.