September 2015 - AirVenture 2015 was super! Most records—attendance, performance, vendors, etc.—were broken. Canadian EAA members were recognized in the Canada Tent forums, and we held the first, very successful Canadian EAA members’ breakfast on Wednesday morning. Kudos to our council members who helped do the many chores needed to make the effort the success that it was. In all, our council members and volunteers put in a total of 217 hours of dedicated work. In addition, the wonderful weather helped make this year so good.

Our breakfast was a “ball hit out of the park” event. We started out hoping to have about 100 persons attend. We printed 120 tickets. By the middle of Monday morning all tickets had been exhausted. Joe Zigrossi (Canadian CEO of Global Aerospace) asked me how the tickets were going, and I told him we had exhausted our supply and were turning people away. Sorry to all those who were turned away. After a conversation with Joe, he stated, “Don’t turn anyone else away.” And from then on (this was Tuesday) we invited everyone who inquired. The actual count at the dinner was 155. Fortunately our food vendor had anticipated additional attendance and had provided a second set of trays of hot and delicious food. Everyone was served. For next year we are looking at 250 attendees. Make sure you get your ticket early and tell your Canadian friends too. Sincere thanks to Joe Zigrossi for taking on the entire cost of the breakfast this year. 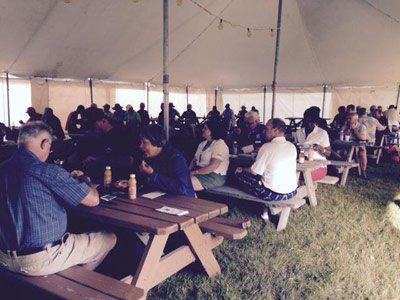 We used the opportunity at this breakfast to recognize Canadian EAA members who had contributed much to our EAA interests in Canada. Rem Walker and Ted Slack each received a plaque thanking them for “over 50 years of support to the Spirit of Aviation.” Both awards were given in absentia of the recipients, with Lloyd Richards accepting the award for Rem Walker and Bill Reed accepting for Ted Slack. I was able to deliver Rem’s plaque in Regina on our way home. 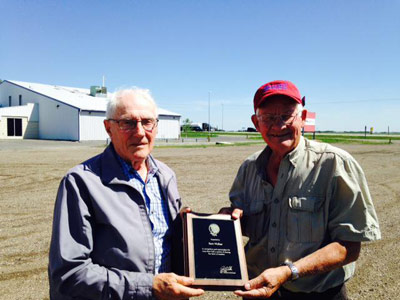 Rob Erdos, chief test pilot for the National Research Council of Canada, gave a delightful and substantive talk on “Test Flying Unique Aircraft.” You could have heard a pin drop as Rob entertained the audience. NEWS FLASH: Our guest speaker for next year’s breakfast will be Rick Volker, test pilot, aerobatic performance pilot, and the second Canadian (Rob Erdos being the other) to fly the Hurricane, the Spitfire, and the Messerschmitt ME 109. 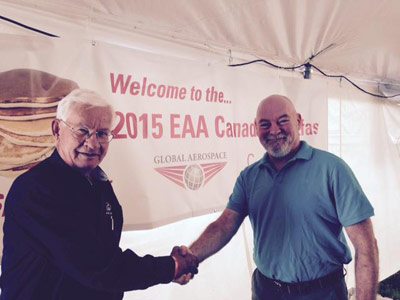 Jack Dueck thanks Rob Erdos for his fascinating talk

Almost all of the forums were well-attended. Ian Brown pitched in for Paul Dyck, who couldn’t attend, to present the forums on United States and Canadian cross-border flying. Both presentations had standing room only, with one count as high as 70 persons.

Attendance to the forums was counted as follows:

Interest in these forums helps us to plan next year’s forum lineup. Much appreciation was shown for these forums by the audience. Unfortunately Paul Dyck, Wally Hemming, and Jill Oaks were not in attendance this year, so several forums had to be deleted at the last moment.

Our EAA staff contact, Cory Puuri, did an outstanding job in helping salvage the tent after Friday night’s storm before the event. He had signs made scheduling each day’s forums as well as hard copies that we handed out. Cory also had the breakfast tickets printed and made the connection with Joe Zigrossi for the breakfast funding. Kudos to Cory. I brought along two large Canadian flags, and with the purchase of three 10-foot electrical conduits and connectors, I was able to fly these flags at 15 feet, well above our forums tent.

Bill Reed brought his Fleet Canuck to our tent for the entire week. Bill fought 20-knot headwinds the whole way, adding some 11 hours of flight time to his logbook. The Fleet Canuck is a Canadian success story, and many of us learned to fly in one.

Unfortunately several forums washed out. They were: Forming an EAA Chapter in Canada and Bits and Pieces newsletter. Also the early Monday morning and Saturday morning forums had a lower count. We should probably eliminate them next year.

Paul Dyck had an emergency at the last moment that precluded him from this year’s AirVenture. Because Paul could not attend, Wally Hemming, who travels with Paul, could not present his forum on “Hearing Loss Impact on Flying.” This forum was very popular last year, and a number of folks were disappointed that Wally could not present. Fortunately, I still had copies of the paper that Wally presented last year and was able to pass these out to interested people.

A last-minute change to our forum schedule really dropped a wrench into the works. The info sheets had already been printed and couldn’t display the reworked times of our forums. Many folks came to our tent expecting the forum printed on the info sheets, only to find out their forum had already been presented. Next year there will hopefully be no last minute changes, and the info sheets and our forum schedules will harmonize. We also missed the boat on getting Canadian forums listed in the forums section of the AirVenture app.

To Conclude: The 2015 Oshkosh experience was successful, and every year we can see improvements benefiting our Canadian members. We are already planning next year’s event.

We need to have a Canadian flag at our breakfast tent, so that folks know where we are. It wasn’t that obvious this year. Amanda Odebunmi of C-PLAN insurance, who was sharing our tent, suggested making our forums tent a more inviting place for folks by allowing them to use our Wi-Fi and charge up their phones and iPads, as well as having water, soda, and snacks available.

Readers are invited to submit suggestions to Bits and Pieces on how to make the Oshkosh experience even better for Canadian attendees.