This Pathways to Flight initiative may be the ideal catalyst to involve youngsters in a local affordable EAA chapter affiliated flying club.

September 2018 - You will be pleased to learn that the EAA Canadian Council has been working for months on a similar initiative to the one started south of the border that would tap into some unique and exciting opportunities. With your help, we plan to get our unique Pathways to Flight project up and running here in Canada.

Sport aviation in Canada, as elsewhere in the world, continues to struggle with myriad challenges, one of the biggest of which is an aging pilot population. The Young Eagles program has been great at stimulating interest in aviation, as has the Canadian Air Cadet program, but the attrition rate is huge.

For many young, newly qualified pilots, once they leave, they never get back to it, and anyone who has been away from flying for a while will agree that the longer you’re away, the more difficult the journey back. Even if their experience is brief, it marks them for life, and they will always consider themselves aviators at heart.

The basic problem is money. Very few young people have unlimited resources or choice when it comes to the competition: buying a home, raising a family, etc. What if we could show that people can stay involved throughout their lives without requiring more financial or time commitments than other pastimes (boating, golf, skiing, and so on)? The solution might be in forming a club around the restoration of an older aircraft. You’ve all seen them. The sad, unkempt, but salvageable aircraft with an owner who thinks he might fly again some day but has no idea how or when.

Where are the derelicts? How many old Tri-Pacers, Cubs, Champs, Luscombes, 150s, etc. are out there sitting in pieces waiting for someone to bring them back to life? How many kit planes or amateur-built aircraft projects sit abandoned and incomplete? What if we could gather up one of those old projects and invite some of the most committed or passionate of the “at risk of leaving” pilot graduates to join a team to bring it back to life and get it into the air? Is there a grey-haired owner out there who would be willing to donate the bones to the cause? What if we could find a project manager, someone qualified with building/restoration/maintenance skills and tools to quarterback a project and mentor the owner wannabes? We would keep these folks engaged and help them to acquire skills and to understand that aircraft ownership isn’t just for others. In return for their sweat equity, they get to belong to a small flying club and thereby have access to flying the plane, economically, when it’s finished. These individuals might eventually graduate to independent ownership and take over as the next generation of caretakers of our beloved aviation artefacts.

If we could get a couple of test cases up and running, we might prove that there are workable options to be exploited. Where it might lead is anybody’s guess, but one or two successful cases might point the way and lead to others. The objective is clearly to bridge the generations and bring more much-needed youth into the recreational aviation world.

One way to accomplish this might be to leverage EAA Canada Inc.’s newly incorporated not-for-profit status and to support EAAC’s plan to acquire charitable status from the Canada Revenue Agency. Our application to CRA has been filed, and we hope the charitable status will be in place this year. Being able to donate an aircraft and receive a tax credit would be a significant stimulus.

Here’s how we think it could possibly work.

Aircraft building projects within EAA chapters is not a particularly unique concept. It’s been done many times before and has been proven to work because it gives members a reason to belong — it answers the call to do something — anything! What is unique about this project concept is that it specifically targets a neglected group of young people upon which our future viability may well depend. It recognizes a significant advantage we have in Canada in a vast pool of potential young participants including Air Cadets, and it leverages a nationwide opportunity to use EAAC’s charitable status. 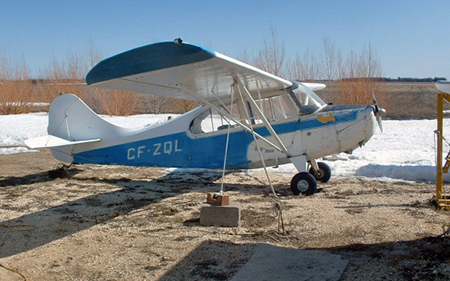 We have already received tentative offers of donations including tools, supplies, and even a complete aircraft (a 1946 Aeronca Champ) that is ready to go to a new home. What we need now is a chapter that is willing to step up and take on our first case and to help us develop a process that can be replicated elsewhere as the initiative gathers steam. We hope a Canadian chapter, or a new group that’s willing to form a chapter, may be ready to answer the call. We are also looking for a small number of interested members to form an advisory board to work with us in our effort to operationalize these ideas.

So, this is a call to action. If you think your chapter is ready for a challenge of this nature or if participating in an advisory capacity appeals to you, please get in touch with us so we can answer any questions or talk about next steps. We’d love to hear from you!

For some background on these initiatives, refer to the article titled “Taking Off, Together” (page 82 in the July issue of EAA Sport Aviation). More recently, the August 21 ChapterGram presented an update on some new programs.