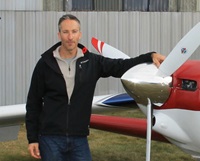 November 2015 - EAA headquarters, together with our Canadian Council, is pleased to introduce our newest council member, Jeff Seaborn.

Once established in my own career and with my own family, I decided it was time to renew my interest in aviation. I started training for my private license early in 2006, earning it by the end of the year.

Since then I have logged over 500 hours in various aircraft with time in a Stampe SV-4 all the way up to a P-51 Mustang. Three hundred twenty-five of these hours are in my RV-7 that I built over three years. Most recently I’ve completed the 25-hour test phase of my recently completed DR-107 One Design. To learn the basic skills to build each of these planes, I attended Sport Air Workshops. I’ve attended “Sheet Metal,” “Electrics and Avionics,” “Annual and Maintenance of your Homebuilt,” and “Test Flying Your Aircraft.” I was asked to present the “Test Flying Your Aircraft” course to students in subsequent years.

When asked why he wanted to be a member of the council, Jeff replied:

“I would like to help Canadians realize the countless benefits of being associated with the largest and most effective (recreational) aviation organization in the world. At the same time I would like to increase my knowledge on the operations of EAA and help expand EAA’s understanding of the unique needs of Canadian pilots and aircraft owners.”

Jeff and his family live in Calgary, Alberta.