Bob Laidlaw — A Canadian in Mojave Brings a Moth Home

October 10, 2018 — There are many Canadians who have shown incredible courage and initiative, and my interest lies with those whose lives revolve around aviation. Some may have completed an epic flight or built an aircraft that fills a unique spot in history, and still others have shown great business acumen while both promoting and enjoying aviation. Over the next few months, I hope to highlight some of these individuals whose moment of glory or lifetime achievements are largely forgotten.

In Mojave, California, the former U.S. Marine Corps air base today known as the Mojave Air and Space Port is where I first became aware of a company called Flight Systems. It was 1981, and it had a hangar on the flightline and an array of exotic jet aircraft parked on the ramp. There was an A-4 Skyhawk and an F-100 Super Sabre, both in Vietnam-era camo, but the one that really caught my eye was a meticulously maintained and highly polished F-86 Sabre. It displayed the very appropriate civil registration N86FS. I had drawn this aircraft countless times in school when I was supposed to be paying attention to math or science or whatever the teachers were droning on about. 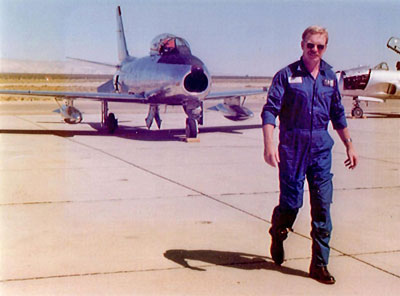 Bob Laidlaw and an F-86 Sabre in the early days.

Speaking of drones, there were a couple more Sabres with red tails that were actual drones. These aircraft were remotely controlled and flown as targets for weapons testing flights. The owner of all of this and Flight Systems Inc. was a Canadian from Toronto. W.R. “Bob” Laidlaw who had purchased a quantity of decommissioned Royal Canadian Air Force F-86s from Dave McEwen in Moncton, New Brunswick, who in turn had purchased them as surplus from the Crown Assets Disposal Corporation. Dave overhauled the airplanes and shipped them to Mojave where Bob designed and installed a remote flight control system that permitted these once proud but now surplus jets to fly again as pilotless target drones for the U.S. Army.

I was in Mojave at the time with Garry LeGare, EAA 94585, my business partner and friend who had built the prototype Quickie Q2 and had a small shop on the field where he was working on the development of a composite amphibious airplane. Across the road from that shop was an enclosure with a dozen or more ex-Royal Canadian Air Force F-86 fuselages sitting in cradles and stacks of wings in racks. We would sit in the evening with a cool one and muse about stealing and flying one out of there. That would have been the easy part, the hard part would be paying for the fuel — those old engines had a voracious appetite for jet fuel.

Years later at a fly-in at Evergreen, Washington, just outside of Portland, Oregon, I met a couple with a perfectly restored Tiger Moth with RCAF markings. Two friends of mine from Langley, British Columbia, who were associated with the Canadian Museum of Flight were at the fly-in and had worked with the airplane’s owner in the past, both in Langley and at his home in Nevada advising him on the restoration. His name was Bob Laidlaw. We had dinner that night with him and his wife, Nell, and over the course of the evening, I learned that he was a Canadian living in Southern California and suddenly the light came on. This was the Bob Laidlaw with the F-86s, and would you believe it, he was a real person who restored and flew a Tiger Moth and a Chipmunk. 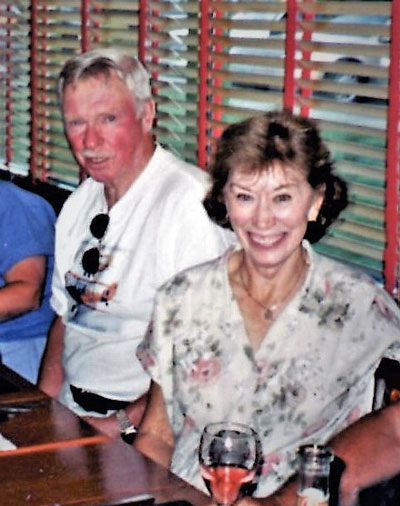 He had learned to fly in the 1940s in southern Ontario in Moths, graduated to Spitfires in England, worked as a U.S. Navy test pilot, etc., and now that he was retired, he had this Moth restored and planned to fly it to Toronto and donate it to the Canadian Air & Space Museum.

Another visit to Langley was planned, and Bob and Nell came north, her driving their motorhome with their two dogs and him flying the Tiger Moth. We took advantage of the opportunity and arranged several formation flights over the Fraser Valley. 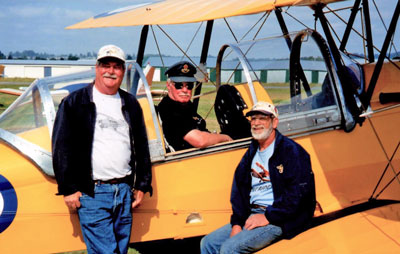 Later, Bob undertook to fly the Moth to Toronto from his home in Truckee, Nevada, but rather than a direct line on the map, he planned to fly through western Canada touching on bases where the Tiger Moth was used.

He crossed the Canada-U.S. border south of Lethbridge, Alberta, then on to Medicine Hat, Regina, Virden, and then to Brandon, Manitoba.

While at Brandon, Bob discovered that the Gipsy engine had developed internal problems, and he determined that it wasn’t up to the still lengthy trip to central Ontario. After conversations with the museum in Toronto, the decision was made to put it into a container and ship it to Oshawa by rail.

Once there, it was reassembled and a loaner engine was obtained and installed for the short flight from Oshawa into Downsview for the formal presentation to the museum there. For the details of that trip, see the full story here.

As of this writing, and while the Moth is back in a container sitting somewhere in the greater Toronto area, museum operations staff are planning a display in temporary quarters under their control later this year.