My First Flight to Canada in August 2017

October 2017 - There is a lot of planning involved in flying over the U.S.-Canada border for the first time. I started reading up on how to cross the border and what documentation was involved. Then I sat through a seminar at EAA AirVenture Oshkosh 2017, which answered some of my questions. The first time, there is extra work such as signing up for the Electronic Advance Passenger Information System (eAPIS), getting a decal and transponder online procurement system (DTOPS) customs sticker, radio permits, charts, etc. I also made a checklist from the information that was on the AOPA website so I could go through it step by step. Overall, it is actually a lot easier that it sounds; just give yourself some time for planning.

Being a first time user of eAPIS, I signed in and filed eAPIS for both the flight to Canada and the return flight two days ahead of time to make sure the process would go through smoothly. I recommend watching the video on AOPA about using eAPIS.

Around noon on the day of the flight, I used ForeFlight to file the International Civil Aviation Organization (ICAO) flight plan from Crystal Airport in Minneapolis, Minnesota, (KMIC) to Fort Frances Municipal Airport (CYAG). I got a flight briefing, and even though the weather was clear, I filed an IFR flight plan up to CYAG. I then called CANPASS and let them know I would be flying into CYAG around 1800. They asked me for the names of the passengers, passport numbers, and some other questions about the flight. There was no need to contact U.S. Customs on the way out; the eAPIS is sufficient.

We departed KMIC at 1630 and landed at CYAG at 1800, right on time. It is a small airport so we taxied up to the fuel station, which is near the airport building, and then I called CANPASS, letting them know that we had arrived at CYAG. They asked for the time of landing and a few other pieces of information and then gave us our arrival report number and said have a good week. We never saw a customs officer in person.

We then fueled up (in liters) and headed out VFR to Sioux Lookout Airport (CYXL). Sioux Lookout is a mandatory frequency airport with Runways 16-34. I received the ATIS and then called on the mandatory frequency when I was 10 minutes out and gave my intentions. There was a person who responded with the recommended runway usage and traffic updates. He then came back and asked me what runway I planned to use and how I planned to enter the pattern. That is one thing that is different from flying in the United States. We touched down at 1918 and after landing, he gave me taxi directions to parking. The overall time was two hours and 48 minutes from takeoff to touchdown at our final destination, which includes one stop at Fort Frances for customs and fuel. The trip up to Canada was slightly stressful the first time because it was so new, but it went smoothly and it sure beats the 9-1/2-hour drive by car.

For the return flight, I filed a VFR flight plan using Foreflight the night before. Our planned departure was 0830 from Sioux Lookout. That morning, I called U.S. Customs and Border Protection at Falls International Airport-Einarson Field (KINL) about two hours before our departure time. In the United States, you need to call the specific port of entry, whereas in Canada, it’s a common CANPASS number for all airports of entry. They asked a few questions about the flight and then verified that our eAPIS was in the system. They gave me instructions for our arrival on where to taxi and park (in the big yellow circle in front of the airport).

I then checked the weather and there was a small storm cell 40 miles to the west that trailed down to the southwest over Dryden. It was a small isolated storm; airports south and 20 miles west of the cell were showing VFR. I called for a weather briefing and was told the flight looked good if I flew south prior to heading the southwest, which was similar to what I was thinking. So, we departed at 0815 and headed south.

On the flight south, the visibility seemed to be slowly getting worse. I called the FIC (Flight Information Centre) and received a weather update. She mentioned that the frontal activity had grown and I would have to go quite a bit south prior to getting around the clouds and that the stormy activity was west and north of us. About 10 minutes later, the clouds seemed to be dropping rapidly and I didn’t want to scud run under the clouds, so I tried to call Winnipeg Center asking for a pop-up IFR clearance.

Because of my location, they could not hear me on the radio. I then turned the airplane on an easterly heading so I could get out in front of the clouds and gain some altitude so I could get reception. I was still having trouble reaching Winnipeg Center. I then called Winnipeg radio and asked them to relay a clearance to me since I couldn’t climb to get reception and still maintain VFR. They cleared me to head toward Dryden and try Winnipeg Center again. Because of the low clouds, I called them again and said in order for me to stay VFR I needed to head east. They had me on radar and told me to climb toward Dryden and then call Winnipeg Center when I reached 3,500 feet. Upon reaching 3,500 feet, I called Winnipeg Center and we received clearance direct to KINL. It seemed that the frontal activity was building around us and we were trapped in the low visibility. Fortunately, I am IFR rated and we were able to pick up a clearance and safely get to KINL. 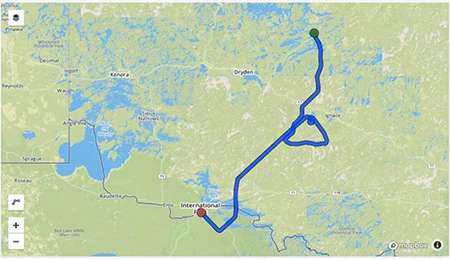 Our route through the weather.

After landing in International Falls, we taxied to the big yellow circle that is painted on the cement. About three minutes later there were three customs officers who approached the airplane. One was scanning the airplane with a handheld X-ray gun and the other two were checking us for proper paperwork. We were asked for our passports and my pilot certificate, medical certificate, and the registration for the aircraft. They told us we could go into the FBO and get fuel while they looked over our paperwork. They came back out about 10 minutes later and told us to have a good day.