October 2016 - We’ve reviewed the low-cost ADS-B Stratux kit in previous issues. It certainly seems to have some useful functionality near the border. Where I live I see weather and traffic with no subscription at all. One problem was that it’s a bit of a messy install with wires and antennas and Velcro tape everywhere. I basically spent another $100 upgrading this configuration to a much neater implementation, but the whole thing would have been under $100 if I’d done it that way to begin with.

One problem we had seen with the first iteration was that, since it was a nest of wires, the connections were intermittent. The two software-defined radio (SDR) USB keys didn’t fit in the USB ports without having their covers removed, and they were too long for the box described below. Also, you probably only need one SDR for use in Canada. The antennas had fairly long cables hanging everywhere.

I got a new Stratux case through Amazon.ca. It’s produced by Ryan Dewsbury, who lives in Tiverton, Ontario. He printed my box on his 3-D printer. 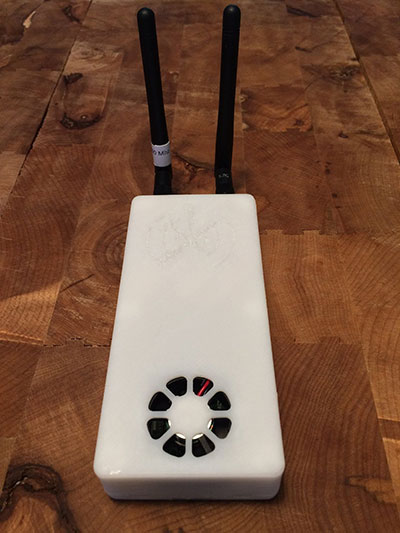 The only problem for me was that the box was designed for the latest Noelec Nano 2 software-defined radios and different antennas. My old ones are about the size of your car key, whereas the new ones are about the size of my thumbnail. The old ones might be useful for any type of SDR receiver for a home computer. There are some interesting applications out there including SDR# (SDR sharp), which is a general-purpose radio scanner. For about the price of a lunch at the airport, you could build yourself a scanner for your laptop. We’ll do some investigation on this. It might be useful to have an aviation-frequency radio scanner. I successfully downloaded SDR#, and it does indeed function as a laptop-driven radio receiver.