A Quarter of a Million Volunteer Hours, RV-6 Back in the Air

November 2016 - We have a mishmash of articles this month, all of them fascinating. Thanks to all the authors, especially a new contributor in last month’s issue, Mike Davenport, who wrote us a really interesting article on airport etiquette and this month on his visit to Paine Field, Washington. He writes really well, and I hope his fellow pilots will encourage him to write more. Stop him and mention that you read his article if you liked it. If you were one of the people he complained about, maybe you can tell him you’re sorry.

Every time we do an oil change we can take advantage of examining the evidence of what has been going on in our engines by not only having the old oil tested for impurities, but also by cutting the oil filter open and looking for foreign material. If you’ve ever wondered about the best way to do this, you can watch this excellent video. There are also a couple of threads on how to build your own filter cutter on the Van’s Air Force website. Just search for “oil filter cutter.” One tip I learned somewhere, but can’t find a reference to it, is once you’ve liberated the paper filter, squeeze all the oil out of it in a vice, which makes it much less messy to inspect. Just fold the accordion into a block, and you’ll be amazed at how much oil squeezes out all over the threads of your vice. Just make sure you’ve already positioned a receiver under the vice to catch all that oil.

Congrats to my friend and fellow pilot, Gaetan Gagnon, for the completion of his rebuild of a flipped-over RV-6. He found an insurance write-off in Ottawa and rebuilt it in the space of one season. There is a lot of work in rebuilding the tail, fuselage, canopy, cowl, engine, prop, and landing gear and repainting the whole thing. “Props” to him for a season of hard work. We’re delighted to have his article in this month’s issue. The plane looks great in its new paint job. Thanks for coming over at the last minute to pull your article together. The refreshing beverage seems to have added to the quality. 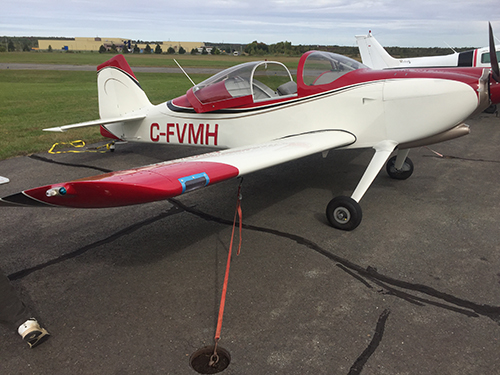 Tied down at her new home

Those of you as fascinated as I am about Ted Kiebke’s modification of a Mercury outboard engine for use in his Acrosport are probably wondering whether it has flown yet. As of the time of writing, it hasn’t, but we’ve included a video of the engine running and a nice look at the finished aircraft in this month’s issue. Can’t wait for that first flight, Ted!

By now you must have all read of the passing of aviation legend Bob Hoover, at the age of 94. Even Gen. Chuck Yeager, perhaps the most famous test pilot of his generation, was humbled by Mr. Hoover, describing him in the foreword to Hoover’s 1996 autobiography, Forever Flying, as “the greatest pilot I ever saw.” Without wishing to duplicate what you can find elsewhere, one thing that occurred to me was that he never cared whether an airplane’s third wheel was at the front or the back, despite what some people say about how to identify “real pilots.” He flew anything. Incidentally, there is a very nice interview with Hoover lasting 48 minutes. You can watch it here. What a great way to remember his contribution. As a young boy working in a grocery store he earned $2 for a whole day’s work. That paid for a 15-minute flying lesson, to which he had to ride his bike 15 miles. He must have been pretty determined, because he had motion sickness most of the time too, and he didn't tell his parents what he was doing until he had soloed.

More than 250,000 volunteer hours were recorded at EAA AirVenture Oshkosh 2016. Thank you to those of our readers who recorded some of those hours. We couldn’t survive without you. Thanks to all our contributors this month. You are our own very special volunteers.

If you ever wanted to see a great representation of how much EAA is about our “family” of friends and volunteers, read this list of how the names of the streets at the AirVenture grounds at Wittman Field in Oshkosh came to be.

We’re always on the lookout for contributors, so please consider writing up your project. If you know anyone who might like to receive this newsletter, please forward it to them, and encourage them to sign up to receive it every month. If you have an idea for an article or would like to contact me, please send your e-mail to EAABitsandPieces@eaa.org.

Enjoy this issue. All feedback will be responded to and is greatly appreciated.