Thanks to Richard for allowing us to publish this handy tip. Its usefulness extends beyond aviation for most of us, but I’ve often wondered what would be a useful remedy to remove corrosion on electrical contacts in my plane. — Ed

I have two examples of workmanship that I have recently been reminded of. The first is our 100-year-old house, which has had a number of previous owners. It appears that some of them did repairs with what they had at hand, not what was needed — the art of the scrounge at its best. However, I am the one stuck having to undo solutions that simply should never have existed. I make it a point not to repeat such Frankensteins.

The other example is my old bazoo, a Toyota Corolla. Last week I spent two evenings diagnosing a blower switch problem that made me re-examine some assumptions about how a 12-volt DC bus works (but that’s another story in itself.) It turned out that the four-position selector switch had some unusually high resistances at one of the contacts, so I suspected either corrosion or wear on the contacts. I was able to open the switch without destroying it and saw, indeed, some green copper oxide and some wear on all the contacts. 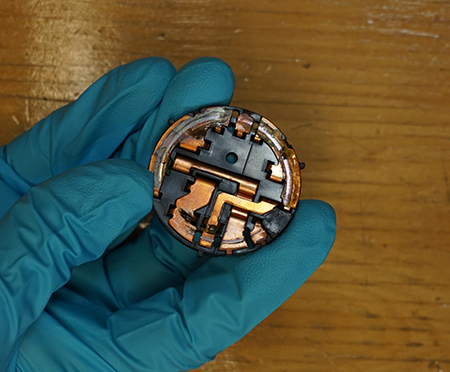 My secret sauce of vinegar, salt, and sodium bicarbonate made fast work of cleaning off the corrosion and some 600-grit sandpaper and dielectric grease made everything shining new. I snapped everything together and was rewarded with less than 100 milliohms resistance on all contacts. Here is a switch that got used a few times a day for over a decade, is repairable, and still keeps going and going like the energizer bunny. Now that’s how you build stuff!

After soaking in secret sauce ... 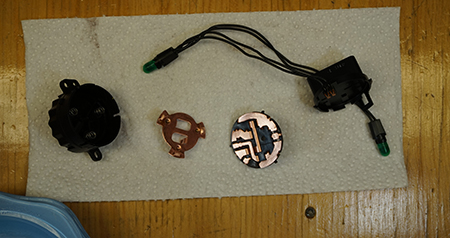