November 2016 - It all started when my friend Ian Brown invited me to be his copilot on a cross-country trip between Bromont, Quebec, and Venice, Florida. I’m referring to my interest in RVs. But before that, six years ago, I finally bought a Cessna 150 after 15 years without much flying. That was how long it took to raise two daughters. Now, at 19 and 21, both of them have their private pilot certificates, and the younger one also has her glider pilot certificate through the Air Cadets. Today, they have close to 100 hours each. I always said to myself that I would not replace the more forgiving Cessna until they both had at least 200 hours of flight logged.

At the same time, some friends were acquiring or upgrading their aircraft to RVs. Having flown south to Florida a couple of times, I started to like the speed and cross-country capability of these Van’s aircraft designs. In the last year I went to Sun ’n Fun International Fly-In & Expo at Lakeland, Florida, EAA AirVenture Oshkosh, and to Germany for Aero Friedrichshafen to see what could replace my trusty Cessna 150.

A solution that would fit the family was to keep the Cessna 150 and get an RV, but that would be costly. Without even speaking to the “boss,” I knew that it would not be an easy sell. Last January I got the opportunity purchase an RV-6 that had been flipped over. Having it analyzed by professionals, I was told that it had been very well built and the main thing was going to be the engine and propeller. The fuselage of course had some damage, but with the help of some experienced friends, I decided we’d be able to get through the work. 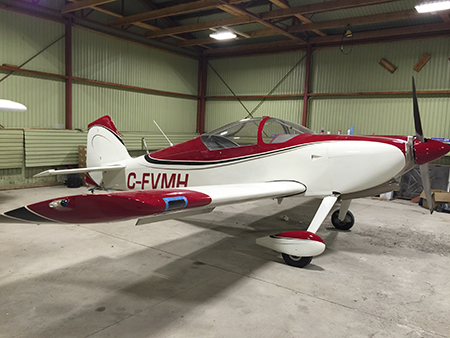 I haven’t added up the hours of work involved, but finally the RV-6 is back in the air. The work done consisted of dismantling all major components, examining them and, while they were all dismantled, why not have them painted? This would satisfy any concerns about safety and result in a nice appearance. I must have taken 300-400 photos while removing everything, including lots of pictures of the engine and its attachments. The engine was completely examined and reassembled by an aircraft engine shop, and we had to replace the crankshaft. All these photos served me well when reinstalling everything and whenever I had questions. Finally, my friends Jean-Pierre, who owns an RV-6, and Ian, who owns an RV-9A, both of whom are very meticulous, checked my work. Also a new friend, 80-year-old retired aircraft mechanic Aime Bedard, oversaw my work and helped with the engine timing. 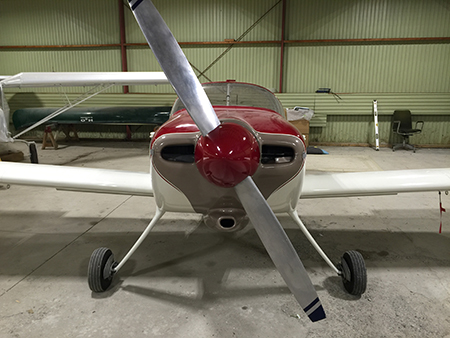 Three-colour detail around the nose

After 10 hours of flying, it’s amazing how fast it climbs. It cruises really fast compared to my little Cessna. Learning to fly a tailwheel is a bonus.

By the end of this project I learned a lot and made some good friends. Now you can see the result.

It cost me more than I was expecting, but it was a good solution to get the approval of my bride, especially since I haven’t been able to calculate how much it all cost yet!