CASEY: In Search of a Forgotten Runway

November 2015 - I’ve heard talk of Casey for years. It’s an abandoned military landing strip in mid-Northern Quebec. Like everyone, I’d heard all sorts of stories about this legendary airport. There were widespread local stories about this runway having been constructed by the Americans during World War II, serving to support English and American aircraft in transit. We heard of it being used as an entry point for narco-traffickers to Canada, or sometimes that it was a fantastic fishing hotspot.

Having met a pilot who’d had the opportunity to land at Casey and having been reassured that I would have no trouble landing there, I decided to see if I could separate the truth from the myth. 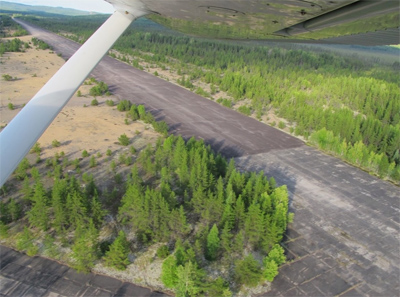 First view from another pilot.

With my friend Edmond, who is also a pilot, we decided to organize a little day of fishing at this mysterious location as well, of course, as engaging in our own personal enquiry. Edmond took care of the fishing gear while I concentrated on planning the flight in my RV-6A. The abandoned runway at Casey is situated 193 miles north of my home airport (Bromont - CZBM) or 171 miles north of Montreal, if you’re leaving from there. The vast majority of the trip is over inhospitable terrain. You can forget niceties like cellular phone reception. As soon as you fly north of the St. Laurence River, you are in the great solitude of the Canadian north, and you see only a multitude of lakes, rivers, and mountains.

Our planned departure was 8 a.m. on Thursday, August 27, from Bromont, Quebec, with a heading of 354 degrees, altitude 6,500 feet. We brought a packed lunch and planned to return at the end of the day. Early that morning I met Edmond at the airport with all of the fishing gear we would need. Unfortunately the weather wasn’t with us. Ground fog was preventing any takeoffs. The forecast suggested it would get better, so we decided to delay the departure. We finally took off around 9:45 a.m. but had to forget the target altitude. We would have to be content with 2,500-3,000 feet. From the start we would have to do a slalom around some low clouds to keep a safe altitude while we headed toward a more mountainous region.

With the help of ForeFlight loaded on my iPad and with lots of storm clouds en route, we finally arrived after a flight of 1 hour, 40 minutes. Our altitude above ground had never exceeded 800-1,000 feet. The base of the clouds had never lifted, and the target runway was at 1,291 feet.

The runway is oriented 05/23, it is 8,200 feet long, and has always been in good condition despite having been abandoned for 50 years or more. You can still see the remnants of decaying foundations of old buildings sticking into the air in the area. After a precautionary pass over the runway, we landed without problems. There are no buildings there, having all been demolished when the military left. We only saw conifers on both sides of the runway and not a living soul around. The only sign of civilization apart from the runway itself was a sign explaining the existence of the area, quoting an extract from a book by author Yvan Savignac. 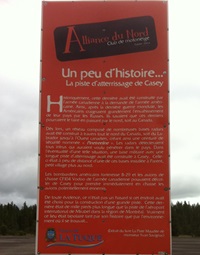 A Bit of the History of the Landing Strip at Casey

“Historically, it was constructed by the Canadian army at the request of the American Army. Because of this, after the last World War, the Americans worried greatly about the invasion of their country by the Russians. They knew that such an invasion would come from the north through Canada.

As a result, a network composed of several radar bases was constructed across the northern part of Canada from Labrador to western Canada, creating a safety belt called the Pinetreeline. Radar stations would detect all intrusions trying to penetrate the airspace. To avoid the eventuality of such a situation, a military base with a long landing strip was constructed at Casey. The one here was constructed close to one of those bases at Parent, a little village just north of here. The American B-29 Superfortress and the CF-104 Voodoo of the Canadian army could take off from Casey to engage their potential enemies.

Evidently it wasn’t just by chance that this place was chosen for the construction of such a long strip, which is 1,000 feet longer than the runway at Mirabel International Airport in the Montreal area [at that time]. Truly this place was evidence of the bipolar nature of the times in which it was constructed.”

Extracted from the book La Piste Maudite (The Damned Runway) by Yvan Savignac.

We were able to put together the following information regarding this location. The military base was constructed at the beginning of the ’50s at the demand of the American forces to our south, in order to be able to block any potential Soviet attack from the north, and it was operational from 1953 to 1964. With coordination from the Royal Canadian Air Force (RCAF) Parent station situated in the area, the base served as a redeployment area for CF-100 fighters and was even equipped with BOMARC ground-to-air missiles to intercept all enemy aircraft over our territory. The sign mentioned the presence of the American B-29 Superfortress and the CF-104 Voodoo. Here there was a little error since the CF-104 was the Starfighter and the CF-101 was known as the Voodoo. Both aircraft were in service with the RCAF so it’s easy to pardon this little mistake the author made. 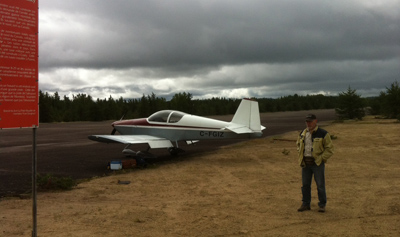 The author’s RV-6A with copilot Edmond.

At the beginning of the ’70s the airport was put back into service with the goal of joining the battle against the spruce budworm. The facility served as a stop for refuelling and taking on the larvicide that was being sprayed. On June 9, 1973, one of these aircraft, a Lockheed Super Constellation, crashed on takeoff at the end of the runway.

More recently, in 1992, one remembers that a Convair 580, having left Colombia loaded with 4,000 kg of cocaine valued at $2.5 billion, was detected by American Customs surveillance aircraft and followed subsequently by Canadian F-18s to its final destination. The aircraft finally landed, as expected, at Casey, which became, for several days, the theatre for one of the biggest anti-drug operations in Canada. 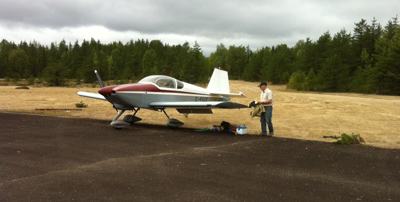 Unloading the fishing gear at the side of the runway.

Interesting as these historical considerations may be, let’s not forget that the reason my copilot, Edmond, and I made this trip was to go fishing above all else! After quickly devouring our lunch on the banks of the river just five minutes from the runway, we started trying to tease the fish, but it didn’t take long for the realities of the northern bush to catch up to us. 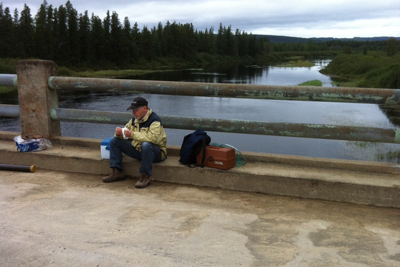 Quick lunch by the river.

Only an hour after starting to fish, without any success, a thick cloud of black flies had us surrounded, and we were at the limits of our patience. We should really have brought a couple of those fly-screen hats that beekeepers (and savvy fishermen) wear. After a quick discussion with my brother-in-arms, we decided to pack up the bags and take our seats in the RV for a return flight south. Up in the air at least the nasty flies couldn’t follow us. With the Municipality of La Tuque not being too far away, we decided to split the journey with a little detour so that we could enjoy a cup of coffee on the banks of the St-Maurice River at the town of La Tuque. We would have the added benefit of enjoying the trip back from there past the picturesque villages of Grand-Mere, Shawinigan, Lac-a-la-Tortue, and Trois-Rivieres.

In closing, we would like to mention that, even if we didn’t eat fish for supper that evening, my friend and I came back with our heads full of images of picturesque places, having succeeded in demystifying a bit, I hope, the legend of the phantom landing strip in Northern Quebec.
To provide a better user experience, EAA uses cookies. To review EAA's data privacy policy or adjust your privacy settings please visit: Data and Privacy Policy.