December 2016 - I fly out of a grass strip that has no power or running water. Keeping my plane clean and spotless hasn’t been all that easy and, previously, not exactly a top priority.

We had a very wet spring and summer that resulted in the grass growing a little longer than usual and, consequently, harbouring more insects than usual. Taxiing through the grass always stirs up the bugs and the prop wash pushes the majority of them to the left-hand side of the plane.

Flying my Rihn DR-107 One Design is always an exciting experience. It is a low-wing monoplane rated for unlimited aerobatics and is very sensitive. (It has a roll rate of 360 degrees per second.) Every flight is exhilarating, but at one point over the summer it became frustrating. While doing aerobatics and pulling g’s, I kept finding I was pulling too hard and causing the wing to stall, dropping the left wing. As an aerobatic plane it is designed and intended to fly close to, and into and out of, the stall through many points of the flight. In hindsight, this early stalling was a clue that I should’ve picked up on, but I figured it was because my technique was changing or I was just getting sloppy.

Where it got to be really troublesome was during my landings. At the best of times, landing the DR-107 elevates your heart rate. It is very agile, and it requires full attention until the plane comes to a stop. Being so short-coupled, it has a desire to swap ends rather quickly. Visibility is slightly better than in a Pitts, but it does require a slipping approach and a good use of peripheral vision once on the ground. Proper timing of the flare into a three-point landing is a really rewarding challenge. Greasing a landing is one of the most satisfying things you can do in it. Landing my RV-7 feels effortless in comparison.

Over a series of a few flights my landings were getting worse and worse. I kept dropping in and bouncing. The drops were getting higher, and the bounces were getting bigger. I went home and berated myself on my flying abilities. I couldn’t understand why I was getting so sloppy.

One morning I flew my DR-107 to a pancake breakfast at a local glider airstrip. It was a relatively long taxi through the grass to park my plane. Afterwards, full of pancakes and sausages, I flew to a friend’s grass strip. I had never flown into his strip before, but I had been told of how smooth the runway is. I kept my approach high to clear the power line at the near end of the runway and then dropped in after the line. As I was still a few feet off the ground and approaching the flare, the plane dropped out of the air and bounced hard. This drop surprised the heck out of me. A few choice words escaped my lips, and I throttled up and flew away. In addition to bruising my ego, I’m sure I left some noticeable depressions on his otherwise perfect runway.

With some trepidation I flew home, dreading the landing. Once again, it suffered a similar drop. Not as bad as my previous landing attempt but still a significant bounce. 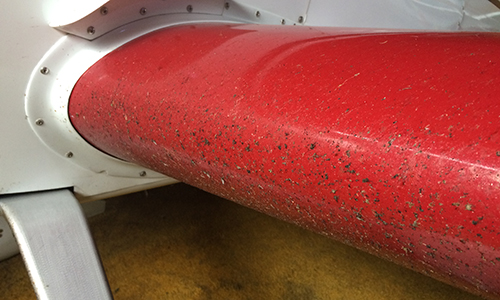 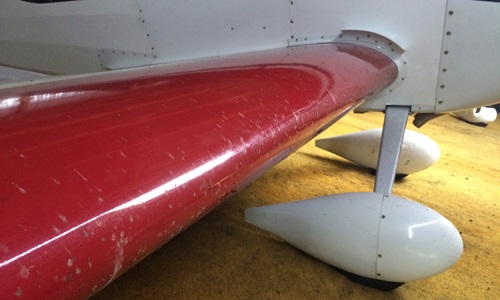 Right wing root not quite so bad

Upon inspection, I realized there were a lot of bugs on the left wing root leading edge. Certainly many of them were there prior to departure that morning, but the long taxi through the grass at the glider field stirred up many more bugs and made the difference. After cleaning the wings I went for another flight. Yay! The plane was performing and responding the way it was supposed to, as I had grown to predict and enjoy.

I now keep a spray can of foaming glass cleaner and a soft nailbrush at the hangar. It only takes a minute or two to scrub these short wings. It’s even quicker after I apply some Rejex to the wings.

I’m sure some pilots with more experience will shake their head and comment that I should have known better. But being a VFR pilot, I’ve never had the experience of flying in icing conditions. I knew that ice on the wings can have significant effect on the flying ability of a wing, but I didn’t realize how little was required to affect it. Describing my experience with other pilots at the airfield, they, too, were surprised at the effect of the bugs.