December 2017 - The Trans-Canada Highway crossed below me as I glanced at the Cav’s airspeed readout. We eased up through 80 mph with the rpm good and the plane climbing strongly. I smiled to myself and thought for the tenth time that morning how I love my airplane.

My Cavalier is the sixth airplane I’ve owned in my flying career, and it’s by far my favourite. Let me tell you a bit about it.

The Cavalier originates with Stan McLeod. Stan, a former Royal Canadian Air Force pilot, was a stalwart fixture in the western Canadian homebuilt scene in the 1960s and 1970s. From his home in Calgary, Alberta, Stan developed, built, and flew the Cavalier design, and then started selling plans. His very close friend Gene Peters of Western Aircraft Supply, also based in Calgary, frequently supplied the wood kits for builders. 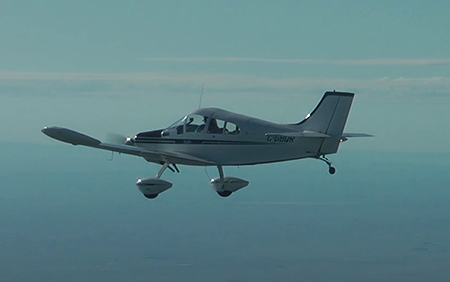 My Cavalier can cruise at 145-150 mph on about 7 gph. It’s a very efficient cross-country cruiser.

The Cavalier is an all-wood design that Stan developed from the Gardan Minicab, of French ancestry. He liked the Minicab’s low-wing platform but felt it could benefit from a wider, spring-steel landing gear. He didn’t like the fuel tank sitting in the pilot’s lap either, so the gas got moved to the wingtips into streamlined fibreglass tanks. The Cavalier’s setup is much safer for the crew if an accident occurs. 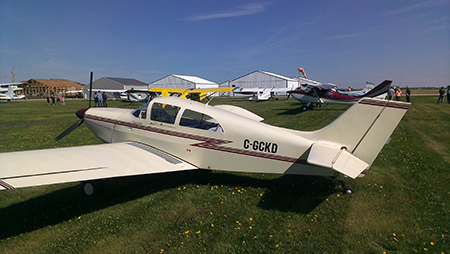 A Cavalier seen at Lacombe, Alberta. The owner had the plane for sale but knew it would be hard to sell with a lowered cabin roof that allowed only shorter pilots.

There were some other mods, too, such as the tail feather shapes and the cabin and canopy design. Cavaliers have mostly sported Lycoming engines, while the Minicab seems happiest with the small Continentals. The split flaps stayed with the design.

Stan also realized that not everyone wanted a taildragger, so he developed a nosewheel version. Some claim that the nosewheel Cavalier is actually faster than the taildragger. I’ve heard tales of nose gear failures, so this is certainly something that, if the nose gear isn’t beefed up enough, might limit a pilot from using rougher runways. 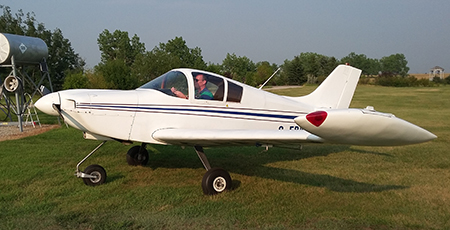 Airline captain Brian Reimer with his tricycle gear Cavalier. He very much enjoys the Cav’s handling.

Various Cavalier models eventually took to the air, with the model SA102.5 being the most popular. There is a retractable version, dubbed the Super Cavalier, but only a few of them have flown. Some builders modify their planes by eliminating the tip tanks or by getting rid of any washout, which Stan quite understandably frowns on. 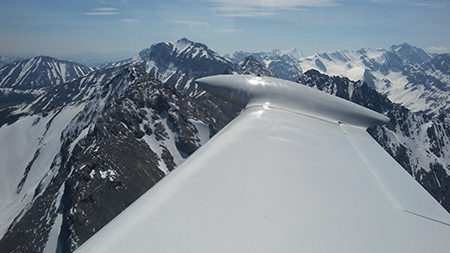 The Cavalier is an excellent mountain flyer. The tip tanks’ shape very closely mimics that of a Cessna 310.

I met Stan a few summers ago and immensely enjoyed his company as we poked about my plane. I couldn’t help myself; I just had to say thank you for designing such a wonderful airplane. He rather grumpily waved me off and said, “Yeah, I get that all the time.” But I saw a ghost of a smile and could tell he appreciated my comments.

Stan has a lot to be proud of; Cavaliers are flying all around the world. You can find them in Canada, the United States, Europe (especially the United Kingdom), New Zealand, Australia, and South Africa. He estimates he has sold about 5,000 sets of plans and guesses maybe 10 percent of them are flying. Interestingly, there are at least four actively flying in the Calgary area.

So what’s it like to fly the Cavalier? In short: super fun and fantastic! Let me walk you through a short flight from my home strip, Chestermere-Kirkby Field, just outside of Calgary.

After a thorough and typical preflight inspection, I opened the door, climbed easily onto the wing, and slipped into the seat.

The cabin is about 38 inches between the top cockpit rails, but it feels larger since the rails are quite a bit lower than shoulder height. That fact actually helps a lot. The cockpit can feel a bit crowded with two people, but inevitably the passenger simply slips their left shoulder quite naturally behind my right one, and things are fine. There’s plenty of hip room, and a generous cargo area behind the seats.

By comparison, I’ve flown in a number of the Van’s RVs and I’ve always felt much more crowded. This is simply because I have rather broad shoulders and the RV’s cabin rails are right at shoulder height.

A sunny day, a fast taildragger, and a grass airstrip; all the ingredients of a Cavalier attitude.

The Cav’s start and run-up were typically Lycoming, and I was soon taxiing to the end of the runway. Visibility over the nose is superb. I lined up, switched on the lights and transponder, and then fed in power. I use one notch, or 15 degrees, of flaps for takeoff. Lately I’ve been exploring takeoffs without any flaps. Honestly, it’s hard to tell the difference.

I once took off solo from an airport near Colorado Springs with a density altitude of 9,200 feet. The acceleration was slower, and the takeoff run was a few hundred feet longer, but the Cav still climbed at close to 900 fpm.

I made a gentle turn and rollout, heading east to get away from Calgary’s controlled airspace and levelled off at 4,500 feet. I got the Cav into cruise mode and watched the airspeed steadily climb. I have to be careful not to overspeed the prop. It won’t do so in level flight, but in even a slight descent the tach will easily show numbers beyond the 2700 rpm red line.

I set the rpm fairly high at 2500-2550 and watch the speed build until I’m truing out at about 145-150 mph. I have one magneto and one Light Speed Engineering electronic ignition, and this gives me a fuel burn of about seven gallons per hour in cruise.

The Cav is very manoeuvrable and light on the controls. I banked hard to the left and kept the ball centred. I pulled on the stick for a tight turn and felt the gs load up, but not so much that I couldn’t still smile. 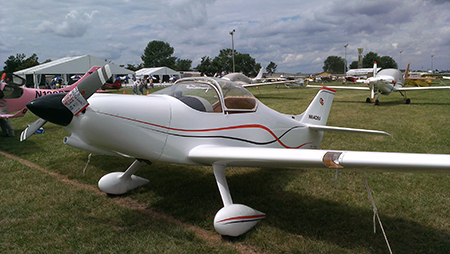 This Cavalier, based in Oregon and photographed at EAA AirVenture Oshkosh, has its fuel in the wings and is very streamlined. It cruises at 160 knots.

After 180 degrees of turn, I reversed to head back the other direction in an equally tight turn. It’s easy to maintain altitude doing this stuff, and I’ve learned that coordinating the rudder makes a big difference in smooth manoeuvring. I played around some more just enjoying the Cav’s performance before slowing down for some stalls.

Stalls are pretty standard, occurring at about 42 mph indicated. It takes quite a nose-up attitude to actually get a solid break. When it does stall, my plane has a rather pronounced left wing drop. I don’t know if all Cavaliers do this, or if it’s just a slight imperfection in my plane’s rigging. It’s an easy recovery in any case and can be accomplished in 150 to 200 feet at most.

Stan said he’s spun Cavaliers numerous times, including inverted, and has had no problem recovering to controlled flight.

Returning to land requires me to do a bit more planning than was needed with the other planes I’ve owned and flown. Speed control and steady cooling are the key concerns. I started winding back the revs about four miles out from the airport and used some tight turns to bleed off airspeed approaching the circuit. Once in the circuit I limited my bank angle to 30 degrees.

I dropped the first notch of flaps when I got to about 120 mph, and then the second notch as I rounded the corner onto base leg, around 100 mph, maybe 105. From there I used power and pitch for speed control. I’ve never used all 45 degrees of flaps.

I started my final approach at about 95 mph and steadily worked the controls to cross the fence at 60 to 65 mph. It was easy to pull the power to idle well back from the threshold and then just coast in.

I touch down in a full three-point attitude, sometimes bouncing a little, sometimes not. I don’t do wheel landings, they’re just not my style. Like any taildragger, the Cav wants me to use my feet to keep it straight, but it’s an easy, enjoyable dance. I get the plane down to an easy walking speed, comfortably in 900-1,000 feet. I’ve done it in as little as 700 feet when I’m right on my game.

The Cavalier carries 34 U.S. gallons in its tip tanks, which gives me a four-hour range. I usually limit myself to about three hours at most, though, which gives me a nice safety margin and is a lot easier on my behind.

Flying the Cavalier in controlled airport environments works well. I’ve mixed with jet and turboprop traffic numerous times, and the Cav’s speed flexibility really seems to help the controllers. Ironically, it’s mixing with slower traffic, such as Cessnas and Pipers, that causes more difficulty. I’ve done S-turns on final approach more than once.

I credit Jack Wiebe of Stoney Creek, Ontario, for the magnificent job he did building my Cavalier. He first flew it in 1983 equipped with a Lycoming O-290 of 125 hp. The 290 was an ideal engine for the Cav, giving lots of power and performance with excellent fuel economy.

Sadly, some O-290 parts are tough to come by, and I replaced that engine with an O-320 in 2015. I gained 15 mph in speed and a bit more climb, too. O-320 parts almost grow on trees, so the switch was definitely a good move given my long-term plans for the plane. The Cav weighs 1,060 pounds empty but can lift off with 700 pounds of people, petrol, and stuff.

My Cavalier after a summer evening flight.

I’ve been everywhere with my Cavalier in the five years I’ve owned it. We’ve flown through Canada’s western provinces, to Oshkosh twice, to Washington, D.C., to Tennessee, to the border of Mexico, and to the U.S. West Coast. I have plenty more distant trips planned, too.

Several times each summer, I fly to Castlegar, British Columbia, for lunch with my folks. I plan for 2 hours and 10 minutes of flight time, which is a lot better than the normal eight-hour highway ride. I can fly the Cav to Castlegar, have lunch, and return all in less time than it takes to drive one way. The Cav’s speed and climb performance make it an excellent mountain flyer.

My Cavalier, my all-wood wonder, is my forever airplane, the last one I’ll own. It does everything I need and most of what I want. Whether across the continent, or around the patch, it’s just so much fun to fly, and it’s affordable to keep and maintain. I smile each time we chase the wind … and usually don’t want to land. No wonder I have such a Cavalier attitude.