The November issue of Bits and Pieces referenced an article in the November 1967 issue of Sport Aviation in which several EAA members were pictured working on one. —Ed.

I started building the Cavalier SA 102.5 in 1968, and it was first flown in 1973. Sid Bullen was my fellow builder and partner in the airplane. We attended EAA Oshkosh for the first time in 1975, but he sadly died shortly afterward. 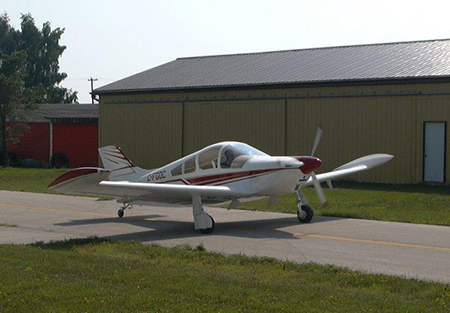 On December 2, 1980, the World War II fire hall collapsed in a violent snowstorm, causing considerable damage. The aircraft was completely rebuilt with many modifications including a new stick control system, mechanical flaps, and more streamlined fairings. The landing gear changed from nose gear to a taildragger with the retractable main gear. Larry Burton from Klamath Falls, Oregon, a fellow Cavalier builder, designed and built the main gear in kit form. The rebuilt aircraft had its first flight in October 2005.

I was going to look up Stan McLeod on our way to Kelowna last year; however we ended up going the southern route. I’ve been unable to find his address. If anyone can help with this, please let us know. —Ed.

The Squarecraft name, which appeared in the November 1967 issue of EAA Sport Aviation with the pictures of builders in Regina, only appeared on Page 8 of our blueprints. All pages of our blueprints have K&H McLeod, Cavalier SA 102. The .5 was added if tip tanks are installed. All of our drawings were annotated as having been traced by Bill Pratt in 1968.