As the bomb bay doors open you will see the names of contributors to the effort to keep the Vulcan flying, including that of the author of this article (if you can read really quickly). Ed.

The last British Vulcan bomber flew its final flight on October 28, 2015. You can see a video here. The Avro Vulcan was designed to deliver one 10,000-pound bomb anywhere in the globe. The Valiant, the Victor, and the Vulcan, collectively known as the V-bombers, were designed to deliver nuclear warheads during the cold war. This chilling prospect was fortunately never realized. 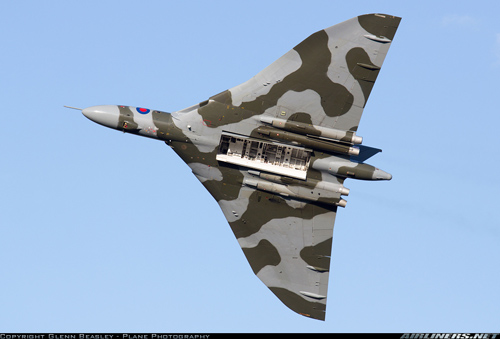 The aircraft was certainly years ahead of its time in design, having been created by the architect of the Lancaster bomber. The huge delta wing design makes this aircraft truly iconic. The American B-52 and the Russian propeller-driven TU-95 were produced at the same time and for the same purpose. Pilots reported that the Vulcan flew like a fighter. 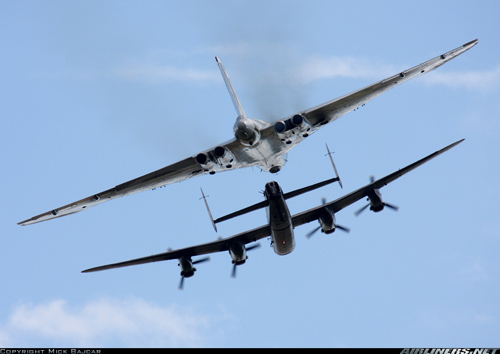 Since 1985 XH558 has been the only flying Vulcan in the world, and it was purchased by a private owner in 1993 with the intention of putting it on display. After the owner discovered that it was in excellent condition, the Vulcan spent the rest of its life flying in air shows until its recent final flight. The companies providing engineering support had all withdrawn their help, and it was finally time for the aircraft to be grounded. To quote Richard Harrold’s comments on Planes TV/YouTube, “(There is) absolutely no technical reason why this must be. The airframe is in fabulous condition, the wing mods done in 2013 were publicised at the time as giving her at least another six years’ life, and there is a plentiful supply of spare Olympus engines. Furthermore, the three design authorities can be replaced; there are other suitably competent firms who have said they’d leap at the chance to take over those roles given half a chance, including a marine Olympus maintenance firm which has said it is ready and willing to rebuild 202s to zero-life condition.”

Having been designed to fly high and fast, the Vulcan had no weapons on board. The only mission it was ever asked to perform was a risky 6,800 mile journey to the Falkland Islands where it succeeded in bombing the Stanley Airfield runway.

The aircraft will still be maintained in flying condition and will be able to taxi for air shows, but it will remain at its home in Doncaster in the North East of England.