Is the Flying Flea Better?

I would like to offer some comments to supplement the article in the July 2013 issue of Bits and Pieces about the Flying Flea aircraft. It is generally known that Falconar Avia Inc., in Edmonton, Alberta, and its predecessors have been selling plans, kits, parts, and supplies for several Flying Flea types for many years. These small tandem-wing aircraft were designed in France by the late Henri Mignet, who had little knowledge of aerodynamics. His designs included the single-seat Mignet HM290, HM293, HM360, and the two-seat HM380. Following these, by other designers came the Lederlin 380 Ladybug and various Falconar derivations - the F295 and the ultralight versions, F293E and F295E.

I am an aeronautical engineer and do know a bit about aerodynamics. In the July 2013 article, it was mentioned that there were 10 fatal accidents with Mignet’s HM14 where competent pilots entered a dive and crashed. The sentence, “CG and too little elevator authority were the culprits,” is rather incomplete. 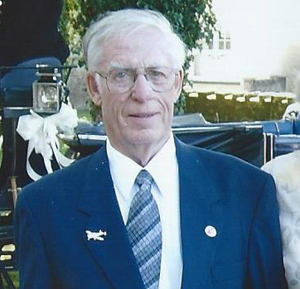 The CG was actually too far forward for the available front wing-required movement, and the rear wing had too much lift with no corrective control. The airfoil used by Mignet for the HM14 had a sharp leading edge and was considerably cambered. It had unfavourable centre of pressure characteristics and sharp stall at low angle of attack.

When trying to control a dive, the stick was pulled back and the gap between the front wing trailing edge and the rear wing leading edge became less. This persuaded air to be deflected under the rear wing. It gave the flap effect, further aggravating the nose down movement. As the pilot pulled on the stick even more, no recovery happened. The stick was fully aft and devoid of corrective recovery. The dive actually steepened and the speed increased until the inevitable crash into ground. In 1935 both French and British aviation authorities grounded the Fleas and did extensive investigations.

After World War II, a whole new family of Flying Fleas evolved - the HM290 series and then the HM360 and HM380. They incorporated all the significant improvements shown by the government prewar investigations. There are always people who like to depart from the plans with unproven changes.

Another problem plaguing the smaller Fleas was Dutch roll - overcontrol of the rudder. Two solutions are available. Fix number one is to use a very low aspect ratio rudder - as used by Jens Jensen in his version of the HM290. The other fix is to install a pair of bungees to give positive restoring pressure on the rudder control. Instead of the quarter-inch-diameter bungees, a pair of screen door type springs could be installed. They would be attached to a special rudder horn, and on the fuselage sides, pop-riveted aluminium angles. The bungees would have to be shielded or frequently inspected as they would tend to deteriorate in sunlight. 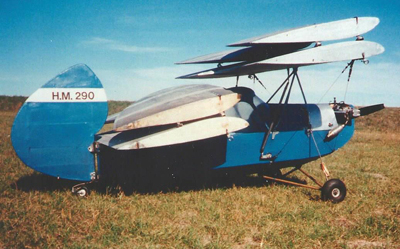 Edmonton Flea builder and airline pilot, Jack Johnson, made an HM290 and powered it with an older model VW engine. It had a large instrument panel and a huge windshield. It would inadvertently go into a Dutch roll. Jack discovered that the only way out was to centralize the stick and it quickly resumed straight flight. Later he put in a 1500-cc VW and made plans and windshield per those plans which was much smaller. He never had any more Dutch roll.

Another Flea builder had crashed due to a Dutch roll. One cure is to use a low-aspect rudder as mentioned above or install a fin and rudder in accordance with the plans, but it is important to have the plans-depicted streamlined canopy or small windshield.

Mignet’s novel folding wings are quick to fold and only add a few pounds to its weight. With wings folded, it is easy to tow the Flea home and store in a shelter or garage. HM293 builder Phil Howell of Christiansburg, Virginia, would tow his plane to a nearby airport and go flying. Then after flying was done, he would tow his flea home to be safe from the elements and convenient for maintenance.

The Flying Flea has some vital features that should be appreciated. They are spin proof! There are hundreds of stall/spin accidents every year that would not happen with a Flying Flea type of aircraft. If the stick is pulled all the way back, with power off, the Flea assumes a parachutelike descent in which the aircraft simply mushes. With power on, the Flea can maintain minimum speed as little as 18 mph. Pushing forward on the stick restores normal speed and flight.

The parachutelike descent feature is a safety bonus in itself. If a pilot found himself inadvertently in fog and out of fuel, this gentle descent could minimize damage upon impact with terrain. Think of it: God sent the terrain up from hell to bang you on the bum and teach you not to fly into marginal weather!

The Flying Fleas are exceptionally manoeuvrable. They can complete a 180-degree turn in a remarkably short radius - good for mountain flying. Sharp manoeuvres are certainly a great advantage when patrolling the ranch and chasing animals.

There is often suffering on the road to success. With the good features now evident, many people believe that the Flying Flea deserves another look.

Chris Falconar is an aeronautical engineer who founded EAA Chapter 30 in 1957. He has a long list of achievements which you can read simply by Googling the word Falconar. You can contact him at chris@falconaravia.com or at 780-465-2024 (Hmm…those last four digits ring a bell.) - Editor

Homebuilders: We Need Your Input