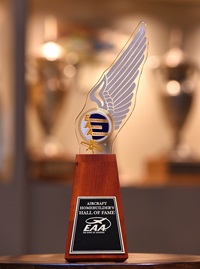 January 10, 2017 - The history of aviation is marked by men and women who possessed the passion, leadership, and can-do spirit to ignore the known limits of possibility. EAA’s Sport Aviation Halls of Fame were started in the fall of 1993 to honor those who have made outstanding contributions to the advancement of the homebuilt, warbird, vintage, ultralight, or IAC communities. Nominations are now being accepted for 2017’s Sport Aviation Halls of Fame inductees, and each aircraft community has its own processes and deadlines for nominations, as follows:

Vintage Hall of Fame: Complete a nomination form and return it to the VAA Hall of Fame committee. The Vintage Aircraft Association accepts nominations on a rolling basis and holds them on file for three years, at which time a nomination must be resubmitted.

Warbirds Hall of Fame: Download and complete a nomination form, to be returned to the EAA Warbirds of America Hall of Fame committee. Nominations must be postmarked no later than May 2, 2017.

IAC Hall of Fame: A nomination form is available for download from the IAC website, and it must be completed and returned to IAC Hall of Fame Chairman David Martin before February 1, 2017.