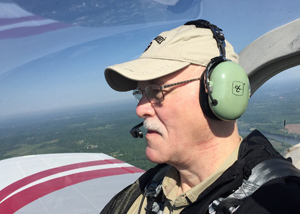 January 21, 2016 - I have given a lot of people rides in both my RV-6 and now in my RV-12, and I always enjoy it as least as much as they do. Having been blessed with owning a Van's RV for nine or 10 years now, it's easy to forget what wonderful little airplanes they are. Just as humans can get used to just about anything, there is a similar risk of getting so used to things that they start to be taken for granted - flying with people that have never been in a small plane before, or pilots that have never experienced the physical freedom of a nimble little sport plane, tends to remind the owner of what a special privilege it is to have one of these things.

I have to be honest, though: I don't remember everyone I've given a ride to, but they sure do remember me! There's one guy at the airport that has had to remind me twice now that he took a ride with me.

And now, as I write this, I realize that I've forgotten his name.

On the other hand, there are some rides that are very memorable. There was a 50-something guy that had never flown in an airplane of any type, despite a lifelong interest.

And then there was Phil.

Phil called me one day last May to introduce himself as a fellow RV-12 builder in search of a ride. Naturally I told him that I'd be happy to give him one, and all he had to do was let me know when he wanted to come out to the airport. There was a pause, then he somewhat reluctantly told me that doing so would be a three-hour round trip. "No problem," I told him, "I'll fly out to Zanesville and you can meet me there." That's less than a half hour trip in the 12, so it was no big deal at all.

The ride was memorable mostly because of how ebullient he was. I've seen that in younger people, and sometimes in 50-somethings as mentioned above, but seldom in the late 60 to 70-something group. That's not to say that they don't enjoy or appreciate it, because they do, but this guy was almost giddy. When we landed, we went through the obligatory "Can I give you some gas money" dance, wherein they offer a couple of times and I respectfully decline.

Beside the fact that accepting money flies right in the face of FAA regulations, I really don't think it's necessary. I enjoy the flying, and the hourly costs of flying an RV-12 are so low that my out-of-pocket cost is nearly insignificant. And besides, I'm really just re-paying the debts incurred from those times in the past when it was I that was asking for/receiving rides in RVs.

This willingness to share the experience is by no means unique to me - it's really just part and parcel with the mores of the RV Community. What I have failed to realize, though, is that what I consider to be nothing more than a small favor may very well be measured at a far higher worth to the recipient.

Obviously Phil had been one of those that received more than what I thought I was giving. I could tell that this was the case when I got back to home base and picked up my phone to close my domestic flight plan (the text I send home to tell my spouse that I had cheated fate once again) and saw that I had a text from Phil telling me to make sure to look over to the passenger side - he had left something in the plane.

Sigh. Very few of them have ever resorted to subterfuge to get past my barriers.

I had to do something with those bills, so I eventually decided to stash them away in a couple of places where they may someday become handy in one of those situations where I suddenly find myself in need of some cash. Believe it or not, I still run across airports that don't take credit cards for gas.

I never forgot Phil's ride, but it had receded to the back corners of my memory until late last December when I received a message from Phil's wife telling me that he had passed away in November.

She told me that she was contacting me because she thought I would want to know how much that ride had meant to Phil.

I took a day or two to absorb the news, then remembered that I had taken a couple of pictures of him during the flight, which is something I try to do with everyone that rides with me. I was able to dig those out of my picture repository and send the better of the two to her, for which she was very grateful.

Then I had another thought.

I never know how to approach emotionally sensitive things like this, so I cautiously composed another message to her that went something like "I apologize if this is inappropriate, but if you need help selling the (RV-12) kit, please let me know and I'll be happy to assist."

She took me up on the offer this past weekend, so I drove out to the very nice heated garage where Phil had been building the plane in order to assess the situation. In order to sell the kit, I would have to have a pretty good idea of what the state of the build was, and just as importantly, how well organized it was. As it turned out, it was in extremely good condition, very well organized, and looked like it should be very easy to sell. In fact, I may have already sold it. I have a friend that lives nearby that has expressed an interest in just this kind of deal.

As I was looking around the shop, I also suggested that she would have no trouble selling the specialty tools as well. As I was winnowing them out from the more day-to-day tools, I came across one that I need myself, so I told her I would be making an offer on it.

When I had all of the airplane parts separated out from lawnmower parts and the like, I asked her how much she wanted for the tool, based on the price I found by looking on Aircraft Spruce.

She paused, clearly thinking it through, then finally said, "Well, I guess I need to know what your fee is going to be first."

I have to confess to being momentarily stunned by the question; I can't imagine anyone in the RV community would even consider charging a fee for what I had done for her.

I told her that there would be no fee - in fact, it was a nice opportunity to use the knowledge that I spent three years building, only to never need again. Happy to do it!

She thought for a few minutes, then said "How about $100 for the tool?" Perfect! I actually remembered where I stashed away those two 50s! Thanks, Phil!

Oh, she also asked if I had known that Phil was ill at the time we went flying together. I had not, but, as it was cancer, he probably did.

He very likely knew that flight would be the only flight he would ever have in an RV-12 - my eyes are getting misty just from writing this.

Now I better understand the value people may be putting on those rides that I consider to be just another chance to fly my airplane. It can be quite high.