Not If but When 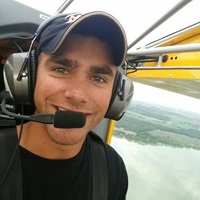 February 4, 2016 - It was never a question of if, but rather of when I would get my pilot certificate, and it was finally answered in early March of 2013. I had finally accomplished my lifelong goal of earning my wings, and being able to live my passion in the cockpit. However, the day I passed my checkride wasn’t the beginning, nor was it the end of my journey through the world of aviation.

My journey started in 1994, at EAA’s 42nd Fly-In and Convention at Oshkosh. My father was a Little Debbie snack cake distributor, and mom was an accountant for Snap-On Tools. Neither were pilots, but both had a fair amount of interest in aviation. Well, apparently at 6 months of age, I really enjoyed attending Oshkosh, because I’ve returned every year since.

As a child, I spent countless hours tinkering with my toy airplanes. After taking my first Young Eagles Ride in 2003 to kick off the afternoon airshow, I was even more hooked on the idea of flight. I spent the next 8 years of my boyhood preoccupied with youth football, track and field, and eventually high school football, but I still made it to Oshkosh each summer to spend one week in aviation heaven.

At 16 years old, I had no idea what my plan was going to be after high school graduation. It wasn’t until I heard of the University of North Dakota’s Aerospace Science’s program, that I had ever entertained the idea of pursuing an aviation degree.

After touring the University of North Dakota with my dad during my senior year of high school, I decided that’s where I would continue my education pursuing an Air Traffic Control degree. I started classes during August of 2012, one of which was a private pilot course, which included ground school as well as flight training. However, classes and flying weren’t the only activities that kept me busy. I also became involved with the local EAA Chapter 1342. Through the chapter, which was made up of almost all UND students, I was able to let my passion for recreational flying grow while I continued my flight training.

After 6 months of primary training, waiting on weather delays, and working around funding issues, I finally earned my private pilot certificate. But what now? At this point, I had changed my field of study to Airport Management, so there was no need to do any further flight training at the university. I took this chance to save up a bit of money so that I could fly Young Eagles at the upcoming Chapter 1342 Young Eagle Rally.

In April of 2013 I took my first Young Eagles up on a ride, and I couldn’t help but think I wanted to do more to support the future of this thing we call general aviation. So, at the end of the school year, I took over as Chapter 1342’s Young Eagles Coordinator.

In Fall of 2013 I returned to campus to begin my sophomore year at UND. It was during this time that I became employed at the local FBO, GFK Flight Support. I also earned my tailwheel endorsement in October 2013. By the way, I still believe every pilot needs to spend a few hours with the little wheel in the back.

Chapter 1342 spent most of the fall months attempting to rebuild our chapter, as we were down to only four members. After hours of advertising and recruiting, we finally had a strong core of about 15 members. After a year of hosting a number of successful events, and some not so successful events, we held officer elections for the 2014-2015 school year (remember, our chapter is run by college students, so our officer terms are a tad different than other chapters). During this round of elections, I was voted as the new president of Chapter 1342.

The summer was spent planning for a busy fall ahead, but we were able to relax as a chapter and spend a week in Oshkosh together. Our chapter had about 10 members attend Oshkosh 2014, and this was when the ball really started rolling for us.

We had an amazing group of new leaders, and we attacked the new school year with determination. After two weeks of marketing our chapter, our first meeting of the fall saw nearly 70 members in attendance! Although this number would slowly drop to about 40 full-time members, we saw our chapter grow tenfold in just 12 months!

I spent the summer of 2015 interning at the St. Cloud Regional Airport, but still made time to get down to Oshkosh for AirVenture 2015 for my 22nd consecutive convention! Chapter 1342 had 28 members attend throughout the week. Out of the members in attendance, nine volunteered for the week. Our campsite welcomed students from all around the world, as we made room for those taking part in the inaugural Collegiate Volunteer program. Having the opportunity to show people around the AirVenture grounds for the first time was an unforgettable experience. The wide eyes and constant questions always reassure me that this whole EAA thing really does have a profound impact on everyone who experiences it.

As fall 2015 rolled around, our chapter began to earn some much earned attention. One of our newest members, Swayne Martin, is a co-owner of the popular aviation website Boldmethod, and runs a very successful blog and YouTube channel. Swayne took footage of our annual Fly-In Camp-Out and Hog Roast, and produced a short video of the event titled “How Pilots Go Camping.” The video went viral, and EAA headquarters took notice of our chapter.

Thanks to the recent success of EAA Chapter 1342, and the video that Swayne put together, I ended up with an internship in the EAA Chapter Office during my winter break of 2015-2016. Oshkosh is a magical place during the annual convention, but EAA Headquarters is no less magical the other 51 weeks a year. Having the chance to see the inner workings of the organization was a special experience.

Since my first visit to Oshkosh in 1994, up until my most recent chance to work at EAA, I have learned just how lucky I am to be able to interact with the people of recreational aviation. As my college graduation draws near, I am thrilled to continue working with all those people who make aviation so special, and do my part to continue to grow the future of private flying!