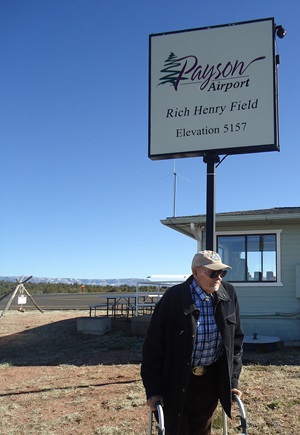 February 9, 2017 - The pilots and greater community of Payson, Arizona, wanted to find a way to honor Rich Henry, EAA 553213, for his lifelong contributions to aviation in the area, so they set out to rename the airport.

Rich’s love affair with Payson started at age 10 when his family first visited the area. In 1966, he became a pilot, and would fly into Payson, and when he and his family moved to the community, living at the airport was his goal.

In 1977, Rich got permission from the Payson Airport Board to start Payson Air. It included a flight school, an airplane maintenance business, and a charter and scenic flight service. His responsibilities included keeping the airport open 24/7, clearing the runway of snow, and providing security. An old green school bus and a shed held his mechanic shop.

Since that time, Rich has been an integral part of the development of Payson Municipal Airport, especially from 1977 to 1992, when he and his wife lived in a trailer at the airport.

Rich said, “We were always available to pilots flying into Payson. At night I would keep the UNICOM by my bed and talk to pilots who were lost or having difficulty.”

During his time in Payson, he taught people to fly, gave flight reviews to hundreds of pilots, and worked as an A&P/IA on more than 3,000 airplanes, increasing the number of pilots in Payson and bringing pilots and planes to the town.

In 1978, Rich and his wife, Doris, opened The Crosswinds restaurant at the airport, using an old trailer. They put in a portable toilet, cut openings in the trailer for windows, and put in a septic tank. Rich brought a 1,000-gallon water tank and pressurized it to deliver water to the restaurant. With Rich’s encouragement, local businesses and Payson pilots donated supplies and labor to build concrete steps on the west side of the restaurant down to the tie-down area on the ramp.

In 1983, Rich was instrumental in starting the nonprofit Payson Pilots Association to offer education for pilots. For many years he was the first in line, with his Cessna 210, to give free flights to youngsters through the Young Eagles program. If the day turned too windy, Rich offered any child waiting the chance to make an appointment to fly another day.

He always said, “If the families took the time to come to the airport, sometimes from many miles away, then I want to make sure the kids got a flight.”

In 1990, Rich was formally selected as airport manager and finally received a salary from the town. For the previous 13 years, although he was the manager of the airport, he made his living from his airplane maintenance, instruction, fueling, and running the restaurant. Although he can no longer fly for medical reasons, Rich continues to work on airplanes in his hangar home at 89 years of age.

Several local pilots, including Bob Pearson; Paul Pitkin, EAA 108174; and Marie Fasano, EAA 635640, put forth Rich’s name to the town council. In addition, they gathered hundreds of signatures from townspeople and pilots on a petition. The town council quickly agreed, and now the airport is officially known as Payson Municipal Airport — Rich Henry Field.