In last month’s issue, Bill Evans described why he decided to make these new wingtips that would also extend his range. Now, over the next two months, Bill teaches us the how. Also see Bill’s YouTube video on the subject. – Editor

This is the second in a series of articles on an interesting project I’m doing over the winter to extend the range of my Sonerai II by adding wingtip tanks. The original plan was to remove the wingtips and use them to make templates so that someone else might make Hoerner wingtips.

The Jabiru 3300 engine consumes about 5 gallons per hour which results in a flight duration decrease from 4 hours to 3 hours. We wanted 4 hours fuel duration. The 6 gallons in the wingtips bring this Sonerai to 4.2 hours!

It is very possible to add enough weight to the wings to pull the wings off in flight. Also, someone did pull the original “A” wings off by doing steep turns, having lengthened each wing by 13 inches. All this is to say it’s wise not to get greedy. It’s also wise to choose the aircraft configuration for aerobatics carefully. So, 6 gallons it is. Tanks must be empty for aerobatics. Watch the g-forces. 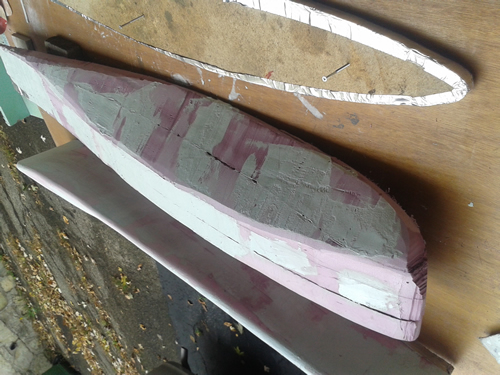 Foam blocks after initial cuts with hot wire and some filling

We are not going that way; the wingtip is to be a layup over a male plug because it is much simpler, cheaper, and faster. Just one pair of wingtips are being made. Matched moulds are a waste in every way. But the profile still needs to be very close. Carefully we used a jigsaw to cut the plywood very close to a thin ink line. Once cut, the wingtip is compared to the template which is sanded to match exactly. Once one template is made, make another. Since the wingtip is not a precision layup, you need to have a little room to play with. The trick is to install 1/32-inch aluminum alloy strips. The strips are not rigid, so they can move a little bit to fit the new wingtips.

Take good long looks with bright lights along all those 52 inches of surfaces. You want the lines straight and the curves even. If there are holes in the plug, use some material about the same hardness as the foam. Bits of foam cut to shape and glued in may be best. Sand them smooth, too.

Sight along the length of your plug. If needed, fill and sand any angles, bulges, or other irregularities. Time spent here on the plug will save much more time, weight, and filler on the wingtip itself. Bondo will do nicely. 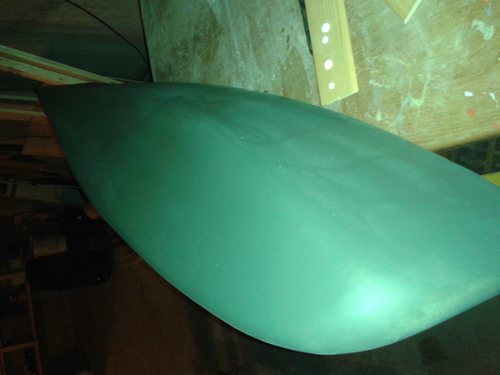 Our plug will be covered in 4-inch-wide tape. Tiny holes will not matter. However, any angles in the curves will be visible.

The red tape is applied to the foam plug so that it overlaps as little as possible. However, it must not have creases or wrinkles, because they will be transferred to your wingtip. I unrolled the tape a little at a time and used a spreader to press the tape against the plug. Once again, gently is the operative word here. This tape is used so the wingtip may be removed from the plug without damage to either. You won’t reuse the plug, but you will use parts of the foam for bulkheads and fuel baffles.

If you have ever fibreglassed in anything, you know that the trick is to get the layup out of or off the mould. I used some spray wax on the red tape to give it some chance of separating from the layup. If you care for the work, use paste wax, shine it, and then apply parting compound. Sometimes it makes separation easier.

You could also carve into your plug a 2-degree angle on the upper and lower surfaces to aid wingtip removal from the plug, although I chose not to do this.

Look for Part 3 of the series in the March issue.