This is not a new debate, but the idea of installing a ballistic parachute recovery system on a homebuilt aircraft is one worth considering. There are certainly many times when it would not be an appropriate solution to the impending problem, but midair breakup, out of fuel over water, severe turbulence, loss of propeller, and catastrophic engine failure in flight are probably examples where it would be great to have the option. One could imagine a better outcome for any of those events happening on a night flight, too. A quick scan of the “saves” at BRSparachutes.com reveals saves from altitudes as low as 50 feet.

These are repackable parachutes, so if the aircraft is rebuildable (much more likely with a parachute), you can fly again. I read one account where a Challenger landed in a heavily wooded area. The wings were damaged; but they were rebuilt and the aircraft is back in the air. 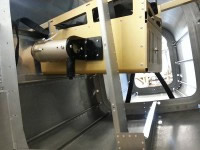 Accidents are often avoidable in situations where a ballistic recovery system is deployed. Fuel starvation is a prime example, but pilots are extremely unlikely to think of the BRS as an alternative to checking fuel levels. We can read of several negative comments about BRS systems, but 50 years ago people were complaining about the obligation to wear a seat belt.

Aircraft Spruce and Specialty sells BRS systems for as little as $3,500 for LSA and $10,247 for a Van’s RV-7/RV-9 plus sales tax. That’s not cheap, and the chances of having to deploy are small, but it’s pretty certain that the BRS would create added value in the sale of your aircraft.

The recent Cirrus with a mechanical failure 250 miles off the coast of Maui certainly has a few folks thinking. It was initially misreported as out of fuel, but the pilot had apparently reported an auxiliary ferry tank fuel valve failure to the U.S. Coast Guard. This explains why he would have been so far offshore without fuel.

A brief review of the Internet for BRS systems revealed this discussion thread, and you can watch the video of the Cirrus save off the coast of Maui here.

In another situation, a pilot flying his homebuilt was videoing a friend’s aerobatics and probably didn’t notice his own overspeed until too late. The vertical stabilizer tore off, and one can imagine his last few seconds. This is purely the author’s opinion, but it’s highly likely a BRS system would have saved him since the vertical stabilizer was found some distance from the primary crash site.