First, a confession. I know almost nothing about airplanes. That they can apparently fly without flapping their wings mystifies me.

There may have been a couple of adult beverages involved when I accepted Ian Brown’s invitation to go up in his homebuilt RV-9A. I had never before considered flying something that one did for pleasure, but Ian’s obvious passion trumped my long-held reservations.

Our one-hour flight along the Florida coast changed the way that I see the area that I have lived in for the last several years. My conception of the topography that I thought I knew so well quickly changed from two to three dimensions. Not exactly world peace perhaps, but life-changing in its own way.

And I got my first glimpse of why people fly for pleasure.

When Ian followed his invitation to fly with an invitation to the 2015 U.S. Sport Aviation Expo in Sebring, Florida, I quickly accepted.

According to Expo Director Jana Filip, “The Sebring Expo is a place where people who share the passion, joy, and love of sport aviation will gather together for years to come.”

Over 100 exhibitors represented a wide range of aircraft manufacturers and related technology. Over 60 sessions that were spread over the four-day expo included safety demonstrations, the latest aviation technology, and my personal favourite, daily manufacturers’ showcase flights.

Though I’m sure the expo had its share of window shoppers, one of its goals is to help people locate the affordable aircraft of their dreams. This was clearly an event created in part to link private owners with qualified buyers. Again according to Ms. Filip, more sport aircraft are sold at the Sebring Expo than at any other show throughout the year.

Each day of the expo (January 14 to 17) included a keynote address. David Hirschman of AOPA spoke enthusiastically about the recent growth of light-sport aviation, which has significantly exceeded that of other general aviation segments. He was also proud of the safety record of light-sport aviation, all the more impressive in a time of rapid growth.

A panel discussion on another day focused on FAA regulations and the frustration many light-sport aircraft (LSA) enthusiasts have with some of them, including issues of transparency and added costs. One panelist talked at some length about creating standards for rebuilding, restoring, and re-equipping existing aircraft as an affordable alternative to the high cost of new aircraft and a way to increase international participation in sport aviation. All of the panel experts agree that electric engines represented an exciting new prospect.

Back to my original confession: Given my recent exposure to sport aviation, I was most struck by the incredible diversity in flying machines represented at the expo. I doubt Orville and Wilbur had any idea what they were getting us into.

To a newcomer’s eyes, LSA ranged from the classic to the sporty to the elegant to the what-the-heck-is-that. The most meaningful part of my time was spent just wandering around and perusing manufacturers’ aircraft, and enjoying a ring-side seat at the daily air show which featured many of the same aircraft.

I decided to focus on three that I felt represented that diversity:

Consumer alert: This thing has no flippin’ wings! The Calidus AutoGyro gyroplane just shouldn’t be able to fly. Period. It looks like an egg wearing a beanie cap. 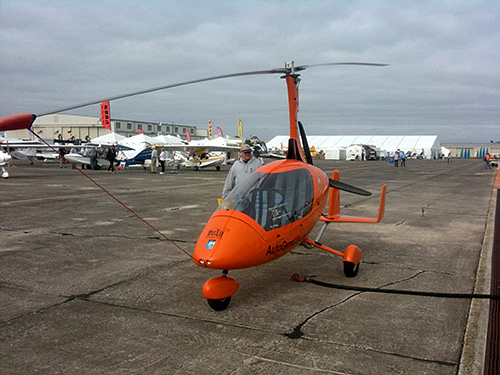 The Calidus by AutoGyro GmbH

But fly, it can. It takes off in about 3 feet. (For Canadian readers, that would be 1.75 litres.) Once in the air, it can do a 180-degree turn faster than my springer spaniel at dinnertime. And stops, as the old saying goes, on a dime and gives 9 cents in change.

Range: Up to 5 hours

If Batman had a Batplane, this would be it. In black, of course (not currently offered by the manufacturer). The Velocity TXL is an eye-popper just rolling down the runway. Its high-profile winglets even look like bat ears. It’s not even remotely capable of being considered for the LSA category, but it was there, anyway. 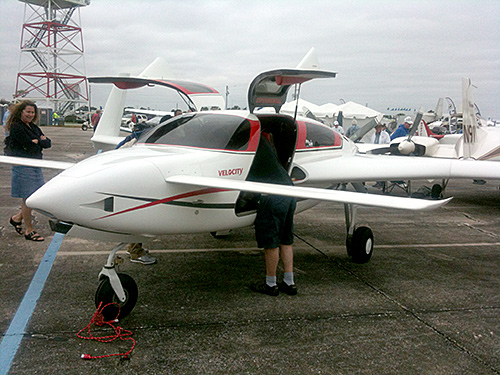 A lot of interest in the Velocity TXL

I talked to an expo attendee who bought the long and sleek aircraft, and he raved about it. He said the actual performance significantly exceeded the manufacturer’s specs. I don’t want to know how he found that out. 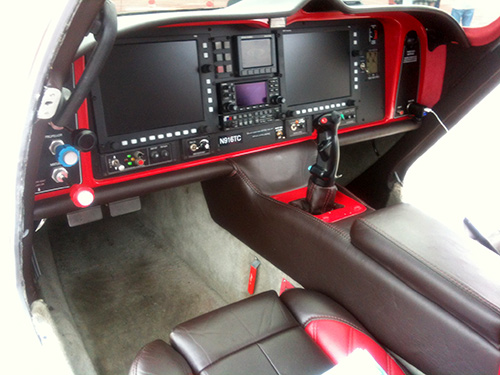 I watched the Pipistrel Sinus motorglider take off and I fell in love. Equipped with the optional nearly 50-foot wingspan, the aircraft created only one audible sound which was the “oohs and aahs” of the crowd. 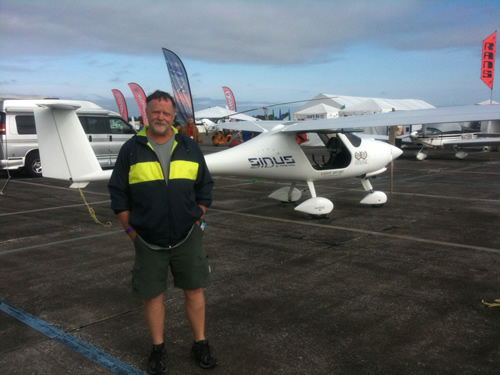 The author posed with his pick of the litter.

Quiet, beautiful, and efficient. The prettiest girl at the dance. This plane has grace. Just a purely personal choice, but if I were to buy one aircraft at the U.S. Sport Aviation Expo, the Sinus would have a special place in my very large and imaginary garage.

So, is a sport aircraft in my future? Ian has certainly been hard at work to convince me. I did buy 100 raffle tickets at the expo, so I’m pretty sure I’m going to win one soon.