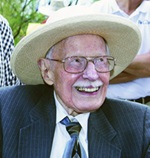 March 10, 2016 - The Aviation Foundation of America will unveil a life-size statue of beloved aviation legend R.A. “Bob” Hoover at a reception at the National Air and Space Museum’s Steven F. Udvar-Hazy Center on Saturday, April 2, 2016. Hoover’s contributions to aviation and aerospace have advanced the United States’ global leadership in the industry as well as safety and skill for millions of pilots and passengers.

“So many people love and admire Bob Hoover and the moment seems right for all of us to join together and celebrate this great occasion,” said Greg Herrick, president of the Aviation Foundation of America (AFA), the 501(c)3 organization responsible for the statue and its fundraising.

The effort to create a life-size statue of Bob Hoover began during discussions at EAA AirVenture 2014 in Oshkosh, Wisconsin, as a way for generations of pilots to recognize and honor their hero, the man who General James “Jimmy” Doolittle named, “The greatest stick and rudder man who ever lived.”

The Bob Hoover statue is a life-size bronze statue of Hoover waving his iconic straw hat as he used to do following so many air show performances. The sculpture itself is the work of Benjamin Victor, an American sculptor, artist-in-residence and professor of the practice at Boise State University. The celebration will be held at the Udvar-Hazy Center because Hoover’s North American Rockwell Shrike Commander 500S is on display there, along with other artifacts belonging to the legendary pilot.

“I can think of no better way to honor his outstanding contributions to general aviation than to have Bob’s statue on display in a museum or similar institution,” said Pete Bunce, president and CEO of General Aviation Manufacturers Association (GAMA). “Like millions of other pilots and general aviation enthusiasts, I’ve looked up to Bob Hoover since I was a kid for both his thrilling acrobatics in the air and his true gentleman spirit.”

Among Hoover’s many accomplishments he has been awarded the Distinguished Flying Cross, Soldiers Medal, Air Medal, and Purple Heart. He flew 58 missions in World War II before being shot down and held prisoner of war. Sixteen months later he escaped, stealing a Nazi FW-190 fighter from a nearby airfield. He taught himself aerobatics at a young age and has flow more than 300 different types of aircraft and most fighter aircraft.

Hoover performed experimental flight test work on the Navy FJ-2 jet fighter, the F-86D and the F-100. He demonstrated the safe handling and flying qualities of the F-86 and F-100 series fighters to pilots throughout the world. He was the first man to fly the XFJ-2 Fury Jet and the Navy’s T-28 trainer.

In addition to the statue, a purpose of the project is to establish a national award recognizing an aviator who espouses the skills and value shown by Hoover throughout his illustrious career. This award, “The Bob Hoover Trophy,” will be presented annually to “a living aviator who exhibits the airmanship, leadership, and passion for aviation and life demonstrated by R.A. ‘Bob’ Hoover during his distinguished career as a pilot and aviation advocate while also serving as a source of inspiration and encouragement for current and prospective aviators.”

More information on the statue and project may be obtained by visiting The Bob Hoover Trophy website or by e-mail.