To All EAA Volunteers - A Message From Jack Pelton 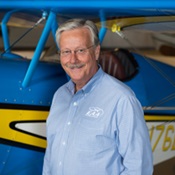 To All EAA Volunteers:

April is National Volunteer Month, an opportunity to especially recognize those people who give of their time, talents, and themselves to make their world a better place. We at EAA know the importance of volunteers. They make everything happen for our organization and for grassroots aviation throughout the country. So this week we want to make a special point of saying "thanks."

EAA volunteers provided more than 250,000 hours of service at Oshkosh alone over the past year. Most of that time was during and surrounding AirVenture, of course, but the year-round activities in our museum, on the grounds, and in the aircraft maintenance hangar also added thousands of hours. Every facet of EAA depends on volunteers to step forward with their knowledge and enthusiasm. That includes the tens of thousands of pilots who have flown nearly 2 million Young Eagles – a milestone we'll reach this year - and the supportive ground volunteers with them. It's also found in EAA chapter activities, as volunteer technical counselors and flight advisors, or as EAA representatives in local aviation committees. Each person and each hour dedicated to aviation makes EAA a better organization.

While EAA survives and thrives through its volunteers, all of us who volunteer also discover rewards that we never expect. We have made new friends within our chapters, at the local airport, and at Oshkosh. We have made possibilities become realities for those dreaming of flying. And we have formed a stronger bond amongst ourselves as an aviation community. It's as EAA Founder Paul Poberezny often said of Oshkosh, but is true of all EAA activities: "We may come for the airplanes, but we come back for the people."

So a humble thank you goes to each of you. Keep up the great work! And encourage others to join you. Sometimes a new, dedicated volunteer only needs to be asked.